Donald Duck is one of the most beloved characters created by Walt Disney. His ever-changing temperament, the distinctive waddle and the semi-intelligible words in his quacking voice are what make him such a loved character. He is quite an unpredictable being, and perhaps, it is this impulsive attitude that has led him to change his jobs so often. He is generally seen in a sailor outfit and cap. Interestingly, the only time he actively took the job as a sailor was in the 1956 animated theatrical short, Chips Ahoy, the second last cartoon featuring Donald Duck in a starring role. Let’s look at some of the other jobs that Donald Duck has attempted. 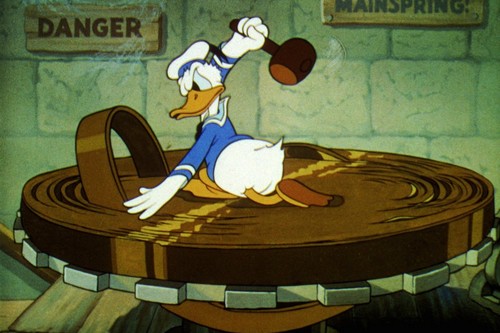 In the 1937-released film, Clock Cleaners, Donald Duck, along with Mickey Mouse and Goofy, works as a janitor in a tall clock tower. While Mickey and Goofy face their own challenges in the job, Donald is stuck with a rather argumentative and combative mainspring of clock as his mop gets caught, and it gets loose. He tries to put it back with a mallet. After a long fight and quarrel with the spring, he gets stuck in a gear on the shaft of the balance wheel, where his friends soon join him. 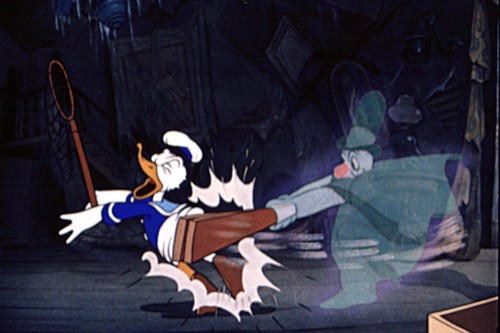 In the 1937 cartoon movie, Lonesome Ghosts, Donald Duck assumes the role of a ghost buster. Ajax Ghost Exterminators are hired to drive out ghosts from a haunted house. The ghosts themselves make the call, and play annoying pranks on Donald, Mickey and Goofy, when they arrive. Donald is whacked with a wooden board, and is scared by uncanny sounds. The three end up covered in molasses and flour, and accidentally scare away the ghosts, leaving Donald feeling quite smug. 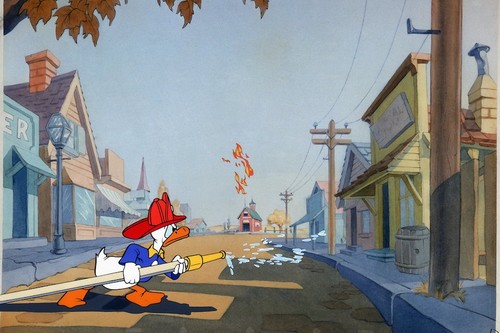 In the 1940 movie, Fire Chief, Donald Duck assumes the role of a fire chief who, with his nephews, Louie, Dewey and Huey, handle the fire station. Donald snores away, much to the annoyance of his nephews, who ring the alarm. Soon, the station building itself is set to fire by his bumbling, and the nervous trio, not realizing that they are already at the destination, ring the alarm. They are unable to cope and their efforts go downhill, as the building goes up in flames. 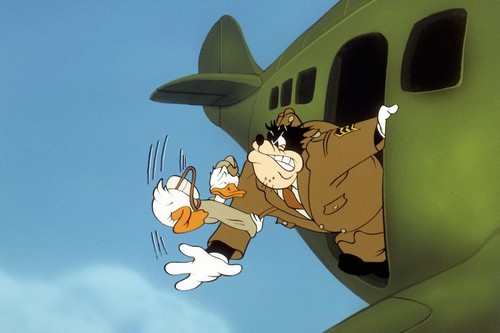 In the 1942 movie, Sky Trooper, Donald Duck has been featured during the World War II years. Donald, a potato peeler in the air force, has the ambition to fly, so much so that he cuts potatoes in the shape of plane. He gets to fly as a parachute troop, after peeling tonnes of potatoes and going through rigorous tests and exercises set by the terrifying Sergeant Black Pete. They fight, and have a wild experience, until they both end up with casts on their legs and arms, peeling potatoes. 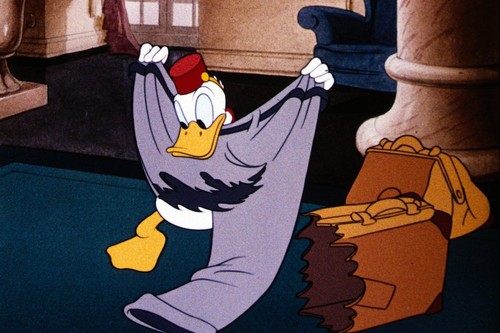 In the 1942 movie, Bellboy Donald, our short-tempered and often cranky duck friend has to turn into a well-behaved and calm bellboy at Lofty Manors hotel, who is reminded by his boss to be quick and dignified, and to remember that the guest is always right. But, when Pegleg Pete and his troublesome child check in to one of their rooms, their antics start to try Donald’s patience which, as we all know, is limited, until he decides that his job is not worth being polite with such guests. 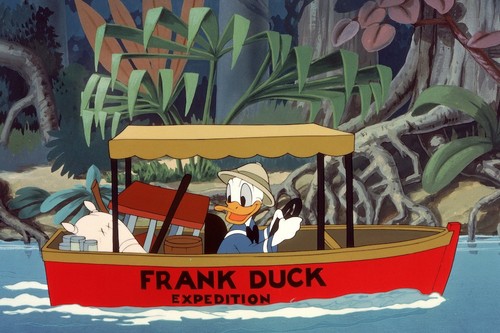 In the 1946 movie, Frank Duck Brings ‘Em Alive, our dear Frank Duck becomes an explorer employed by Ajax Circus to find Goofy, the wild man in the jungle like Tarzan, and get him to sign a contract. In his several failed attempts to capture and cage Goofy, Frank finally ends up in a lion’s den with Goofy, where they find themselves in each other’s clothes. Goofy escapes in Frank’s boat, while the poor duck is left to replace him in the jungle. 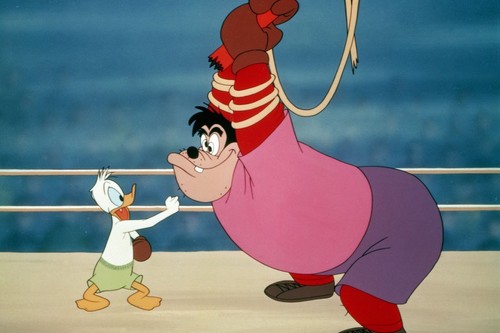 In the 1953 movie, Canvas Back Duck, Donald is tricked into participating in a boxing match with Pegleg Pete, an aggressive and huge bruiser, while Donald was visiting a carnival with his nephews, Huey, Dewey and Louie. The situation goes out of hand for him during the match, despite the help from his nephews, but soon, he accidentally lands a punch on Pete’s jaw. As it turns out, Pete’s jaw was made of glass and it crumbles, and Donald walks out victorious. 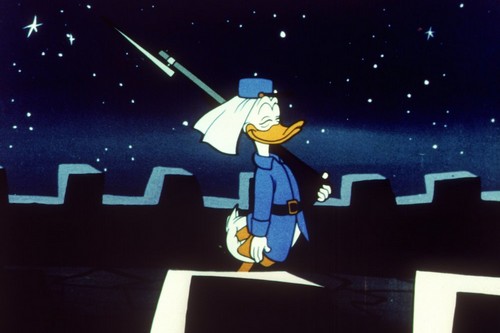 In the 1954-released short, Donald’s Diary, Donald became a soldier in the Foreign Legion. How he ends up with this job is the whole story of the short. Donald and Daisy fall madly in love, and decide to get married. While waiting for Daisy to get dressed, he falls asleep, and has a nightmare about about how his life turns into hell after the wedding. The wedding is called off, and he runs off to become a guard of a fort with the French tricolor flag, far away from Daisy. 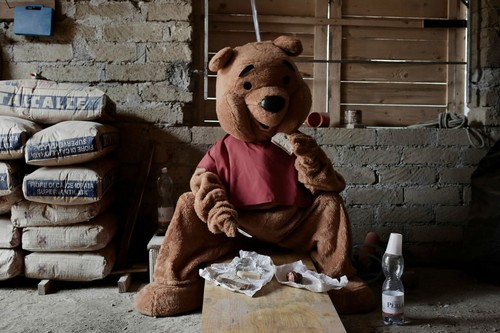 In the 1954 movie, Dragon Around, construction worker Donald Duck, with his crane tractor, tries to uproot Chip and Dale from their natural habitat in the tree to create space for a freeway. The duo sees the steam shovel and thinks that it’s a dragon coming their way, and Donald plays along, fitting a welding torch to the jaws of the ‘dragon’ for flame. The little rodents fight back valiantly, like knights in shining armour. Donald Duck is finally bested by them. 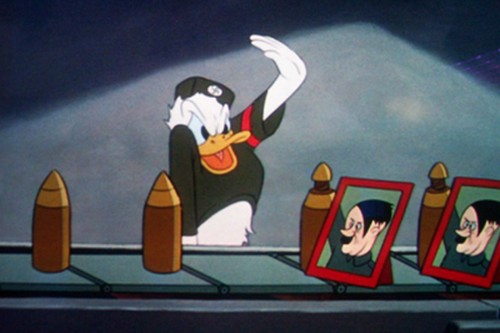 In the 1958 short, Der Fuerer’s Face, Donald is the employee who slaves constantly for the Nazi regime. He is driven crazy by the rigorousness and strictness, and has a nervous breakdown followed by hallucinations, which eventually clear out to make him realize that he has been in bed, having a nightmare all along. His 48-hour daily shifts of screwing caps onto artillery shells are nothing but his imagination. The film led Donald Duck to becoming the non-living being who won an Oscar.

Donald Duck has taken up many other jobs, like a Scout Leader in Good Scouts, Logger in Up a Tree, Musician in Trombone Trouble, Birdfeeder in The Trial of Donald Duck, Hobbyist in Test Pilot Donald, Chef in Chef Donald, etc. Some of his these were chance gigs, while others were in his thoughts. All in all, Donald absolutely won our hearts with whatever he did.