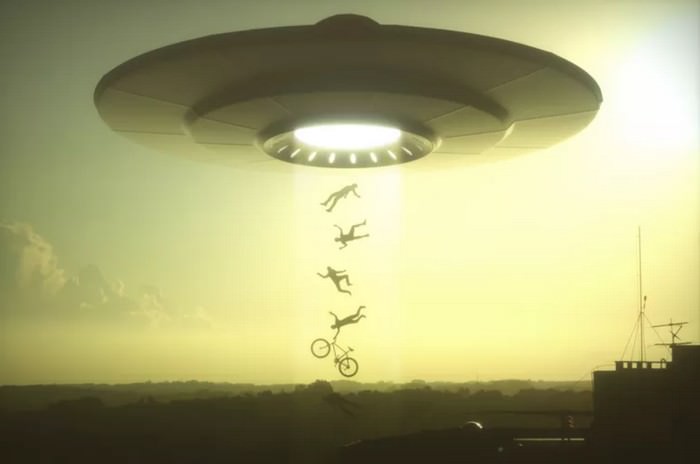 Stories of UFO sightings and alien encounters have been around since the ancient times. These cases became so phenomenal that they led to the creation of a pseudoscientific field of study known as Ufology. Although there are many skeptics who think that these encounters are just made up by people who are desperate for attention, it can’t be denied that some of these cases are well-documented and detailed. Listed below are ten of the most convincing alien abduction stories.

In August 1976, four artists were on a camping trip near Allagash, Maine when they suddenly spotted a glowing orb hovering over the trees. Jim Weiner, Jack Weiner, Charles Foltz, and Charles Rak were night fishing in a canoe when they spotted the orb. As it slowly moved towards them, the four men panicked and paddled towards the bank as fast as they could. A blinding light suddenly beamed at them, and the next thing they knew, they were already standing in the bank, with no memories or whatsoever of what happened.

They began to have nightmares afterwards, which they believed to be recollections of their abduction. They dreamt of being examined by beings with long necks and large heads. The four of them went through regressive hypnosis and lie detector tests, which they all passed. Rak would later on retract his recollections during the hypnosis saying, “The reason I supported the story at first was because I wanted to make money.” He claimed, however, that they really did see strange lights during their camping trip.

Jesse Long claims that he was first abducted by aliens in 1957, when he was just five years old. The aliens conducted experiments on him, which became more painful and traumatic as time passed by. He claimed that they placed a foreign object on his leg that remained with him for 34 years. It was eventually removed and sent for further research at the Southwest Research Institute in Texas. The laboratory report stated that the object had unique characteristics which cannot be explained.

According to Long, he was abducted multiple times over the years and was even forced to crossbreed with a female alien. He was driving to New Orleans in 1990 when a light appeared to bring him inside an alien craft. He was presented with a baby and was told “This is your child.” Nine other children stood along the hallway and he knew right away that they were his children.

Frederick Valentich was an aspiring pilot who was on a training flight off the south-east coast of Australia when he mysteriously disappeared. During his flight, Valentich radioed Melbourne’s Air Traffic Control to report that he’s being approached from the east by an unidentified craft which was emitting a bright light. The transmission was suddenly interrupted by strange, metallic sounds. An intensive search was carried out which encompassed over 1,000 square miles, but no trace of Valentich was ever found.

The young pilot was described as a ‘flying saucer enthusiast’, which led investigators to believe that his disappearance was probably staged. However, numerous reports have stated that there have been UFO sightings in Australia on the night of Valentich’s disappearance.

Whitley Strieber is a well-known horror author who claimed that one of his books, Communion: A True Story, was actually based on an actual alien encounter. It began in December 1985 when he was awakened by a strange noise, after which an inhuman creature came rushing towards his bed. He woke up in the morning feeling disoriented, without knowing why. He recalled memories of his encounter months later through regressive hypnosis, claiming that he was abducted and assaulted by the creatures.

Strieber went on to write four additional autobiographies detailing his encounters with these creatures which he referred to as ‘Visitors’. He theorized that these ‘Visitors’ might have more physical substance than what we normally assume, and that they’re not even a little human, but they’re clearly intelligent. At his own request, Strieber went through extensive tests for temporal lobe epilepsy and other brain abnormalities, only to find that his brain was functioning normally.

On March 20, 1988, John Salter Jr. and his son were driving on Central Wisconsin’s Highway 14 when, for some unknown reason, their truck started driving off of the scheduled route. They’ve been traveling in the opposite direction for an hour, but neither of them could account for the lost time. They eventually decided to take a rest for the night and continue their journey in the morning.

During their drive the next morning, they saw a bright saucer-like form which immediately disappeared in an incredible speed. They began to feel some sort of familiarity upon seeing the mysterious saucer, but they would only start having detailed flashbacks months later. They recall getting forced off the highway by unknown creatures who communicated with them through telepathy. The creatures led them to a spacecraft, where they received injections in various parts of their bodies. After that, they were guided back to their truck, and Salter claimed that they parted with the creatures in a friendly manner.

These events take a bizarre turn when upon returning home, Salter noticed an improvement in his health. His immunity was heightened, cuts and scratches healed rapidly, age spots and wrinkles have faded, among others. Salter’s son did not experience the same physical changes, but claimed that the encounter was the most extraordinary event in his life.

On the night of October 11, 1973, Charles Hickson and his friend, Calvin Parker Jr., were fishing from an old pier in the Pascagoula River when they heard a zipping sound and spotted a glowing, elongated object hovering above the ground. Three humanoid creatures emerged and took Hickson and Parker aboard the spacecraft, where they were examined. They were returned to the fishing site after the examination, after which they immediately reported the encounter to the sheriff.

After 30 minutes of questioning, Jackson Country Sheriff, Fred Diamond, left the two men alone in a room rigged with a hidden microphone to further attest the validity of their claims. The audio recording of Hickson and Parker’s private conversation showed how distressed they were about what they’ve just experienced. Ufologist Philip Mantle later republished a book on this case and calls it one of the “most unique close encounters on record”.

On November 5, 1975, Travis Walton and six of his coworkers were riding a truck when they suddenly encountered a saucer-shaped object hovering 110 feet away from the ground. Walton approached the mysterious object and was struck by a beam of light. His coworkers drove away from the scene due to fright. Walton woke up in what he thought was a hospital emergency room, but upon focusing his line of sight, he found himself surrounded by three bald creatures.

Walton later turned up in Snowflake, Arizona after disappearing for nearly a week. He and the six coworkers who allegedly witnessed his abduction voluntary submitted to a series of tests, which they all passed, except for one whose results were inconclusive. Walton continued to tell his story throughout the years without any discrepancies in details. His coworkers also stood by their side of the story, even refusing bribes to contradict their narratives. Walton eventually wrote a book detailing his claims, and it became the basis for the 1993 film Fire in the Sky.

Then 23-year-old Antonio Vilas Boas was working at the fields on the evening of October 16, 1957 when he saw a bright red star in the sky which turned out to be an egg-shaped spaceship. Boas attempted to flee but was captured by a five-foot tall humanoid who dragged him inside the craft where he was stripped off his clothes and covered with a strange gel.

He was later joined by an attractive, female humanoid. The two had sexual intercourse, after which the female rubbed her belly and pointed towards the sky, gesturing that she will raise their child in space. Boas was taken on a tour around the ship, where he attempted to create a clock-like device to prove his encounter, but was immediately stopped by the humanoids. He was escorted off the ship and found out that the abduction lasted for four hours.

Dr. Olavo Fontes of the National School of Medicine of Brazil examined Boas and concluded that he had been exposed to a large dose of radiation from an unknown source. Boas went on to recall details of his experience without hypnotic regression and he stuck to his claims throughout his life.

It was on the evening of Janury 25, 1967 when a reddish, orange light suddenly shined in the kitchen window of Betty Andreasson’s home. Andreasson rushed to the living room to comfort her frightened children while her father looked out the window. That’s when he saw five, odd creatures hopping towards their house. Before anyone could react, the creatures made their way inside and placed the whole family in a state of suspended animation. Andreasson was brought inside a craft where she underwent a physical examination and was given a bizarre test, which she described as a painful yet religious experience. When her captors brought her back home, they placed her family under some kind of mind control to put them to bed, then they left.

An investigative team was assigned to Andreasson’s case, which included an electronics engineer, an aerospace engineer, a telecommunications specialist, a solar physicist, and a UFO investigator. The case was studied for twelve months, and the results were presented in a 528-page review. The review stated that Andreasson was sane and her claims were believable. Ray Fowler, founder of Mutual UFO Network (MUFON), concluded that Andreasson was “either the most accomplished liar and actress the world had ever seen, or else she had really gone through this ordeal.”

The alien abduction case of Barney and Betty Hill is probably the most famous and well-documented one of its kind. The couple were driving home from a vacation when they noticed a bright light that began to grow bigger and take the form of an “odd-shaped” aircraft as it moved around the sky. It eventually descended in front of their car, hovering around 80-100 feet from them. Barney Hill stepped out of the car and, using his binoculars, was able to spot humanoid figures looking at him through the craft’s windows.

He immediately ran back to the car and asked his wife, Betty Hill, to keep an eye on the craft. They heard a series of beeping sounds. The sounds followed by a tingling sensation passing through their bodies. They were only able to regain consciousness at the second series of buzzing sounds, at which they realized that they were already driving 35 miles south of the sighting location. They couldn’t recall what happened during the missing time. And, they both felt strange and anxious when they got home. They decided to seek for answers regarding the events of that night through a psychiatrist. They went through separate hypnosis sessions. But both described nearly identical experiences of being abducted by creatures with huge, black eyes and gray skin.

Betty and Barney Hill’s case became so widespread that it introduced the alien abduction phenomenon into popular culture. Moreover, Betty’s hand-drawn Star Map, deciphered by experts as the alien’s home, has continued to amaze astrologers until today due to its astonishingly accurate astronomical details.