Discoveries are made every now and then and we get to learn about them through the internet, TV, and newspaper. Some do not attract us much and some leave us awe-struck. If you find the discoveries that you so long have heard about strange, then those that we shall now share with you will leave you dumbstruck, as these are the top 10 weirdest discoveries ever made.

These are unusual white line formation that you can see if you take a flight trip over the southern Peru desert. This is a famous UNESCO world heritage site and the ancient strange formations have shapes of triangles, rectangles, swirls, and trapezoids. If you observe closely then you will be able to see 300 geometrical shapes, plant structures, and 70 animals. The reason behind the creation of these lines is still not known but according to the archeologists, the Nazca Indians made the Nazca lines somewhere between 500 B.C and 750 A.D.

In the 3rd or 4th century in Britain, a strange burial was performed in a village. When in 1991 some archeologists started digging at that site in Northamptonshire they found it strange when they found just one of the 35 bodies had been buried face down. What attracted attention was the mouth of this man. His tongue had been amputated and it was replaced by a piece of rock. Such mutilation has not been heard of and perhaps was the first time ever such a punishment was given to someone. 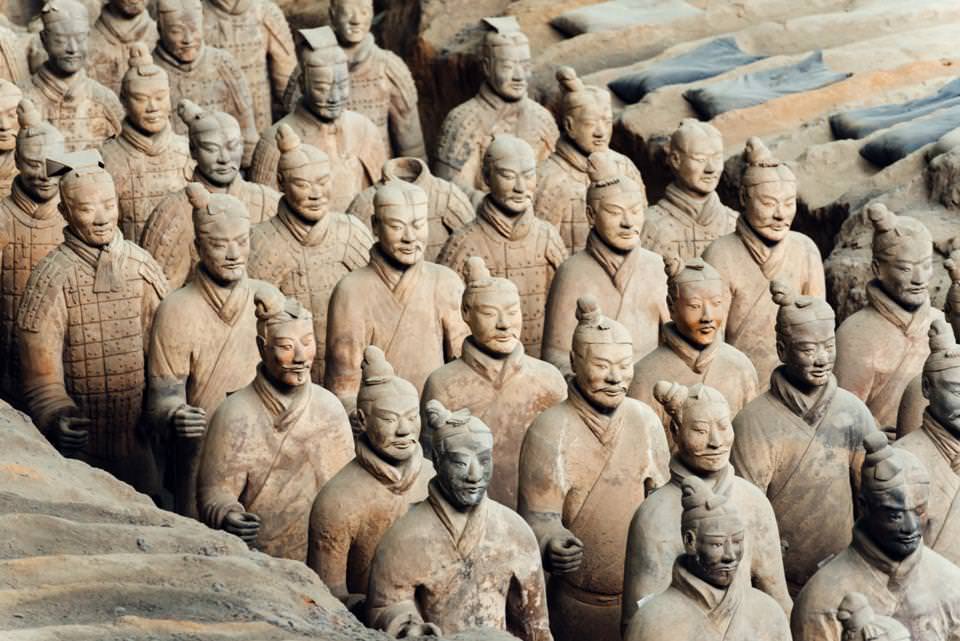 In 1974, one group of archaeologists in Xian made an excavation and this helped them make a splendid discovery, that of a Terracotta army. Thousands of clay soldiers were found buried close to the tomb of the first emperor of China, Qin Shi Huang. These clay soldiers were buried next to him to protect him from the various forces after his demise. 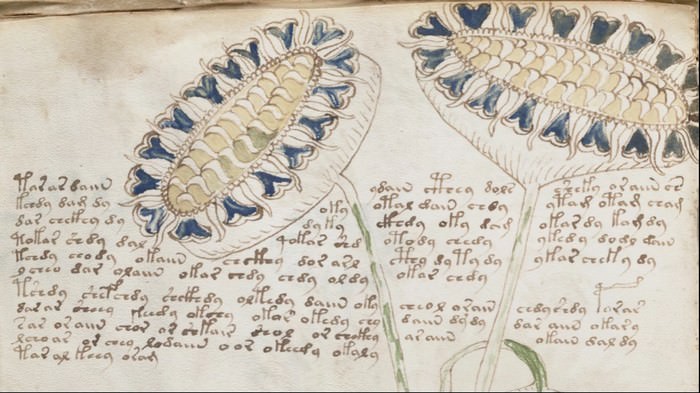 If you do not know anything about the Voynich Manuscript then this discovery will surely grab your attention. Researchers have only been left confused and are not able to understand anything about this manuscript that is hand-drawn, hand-written in a language that cannot be understood. It has many illustrations including small nude females, most of them with swelled abdomens, who are wading or have been immersed in fluids and are interacting with connecting capsules and tubes. Someone in Central Europe made this manuscript in the 15th century. It was acquired by an antiquarian bookseller named Wilfrid M. Voynich, and nothing about the manuscript has been deciphered yet.

Every amateur archeologist wants to make a discovery and this happened a few years ago when two archeologists used their metal detectors in a field in Denmark and discovered some gold. The four big rings of gold that they found made them browse more of the same field located close to the island town of Boeslunde just in hopes to find some more artifacts belonging to the Bronze Age. What they then discovered is surely bizarre. Spirals of gold that was as thin as a hair and nearly 2.5 cm long were found and in total 2,000 curls were discovered. Found between wooden and fur fragments, the treasure was perhaps buried in a beautiful box but what they were used for is still now known. 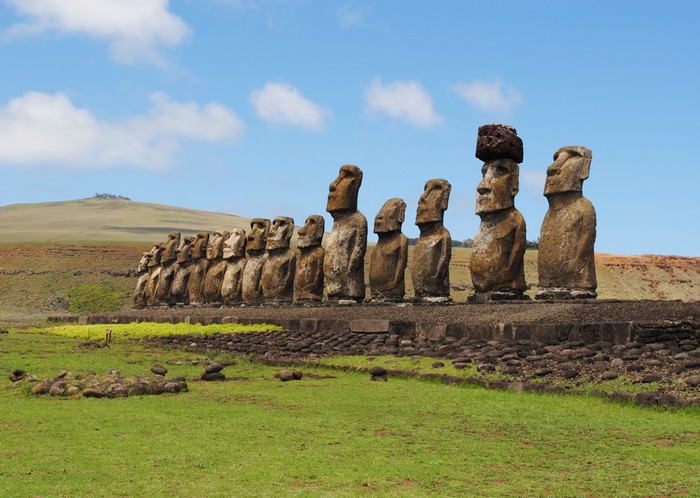 Moai statues of Easter islands are amongst the most iconic and weirdest archeological discoveries made to date. These statues had been carved somewhere between 1300-155 A.D by people of Rapa Nui. The island has a total of 288 moai statues located in different big stone platforms. These statues weigh about 80 tons and have a height of 13 feet. The Rapa Nui people would use rocks from dead volcanoes of this island to create the statues. Owing to the ‘D’ shaped base that these statues have, it is possible to move them side by side with the help of strong ropes.

4. The Mass Grave of the Headless Vikings 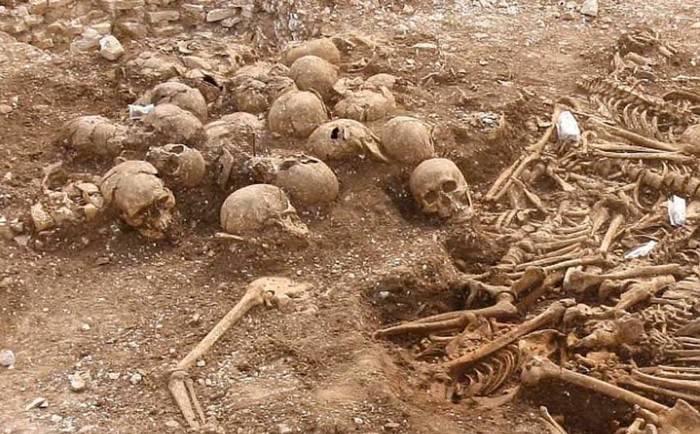 Some archeologists were digging up the sides of an old roadway in Dorset when instead of finding a part of a plow or some more cobblestones they discovered something exciting and strange. It was a mass grave that contained the headless remains of 54 Viking mercenaries. There were 54 dismembered skeletons and 51 skulls in a pile. The size of this burial itself makes it rare, and that too from this period of history, it is all the more unusual.

Stonehenge is a 5000-year-old prehistoric monument situated in Salisbury city, England. The monument has been made using many large and small stones. The larger stones have a height of 30 feet known as sarsens and they weigh up to 25 tons. Big stones were brought from Preseli hills to make this strange monument. It is said that 240 dead people were buried in this area but why exactly the Stonehenge was created is still not known. 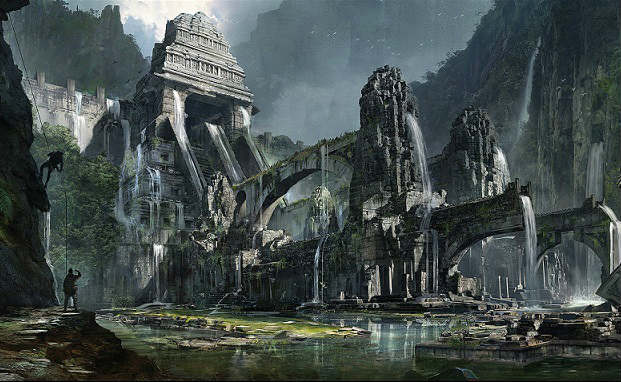 This lost city of Atlantis is perhaps one of the weirdest archeological discoveries ever. This city is said to have been built by Poseidon, the Sea God. According to some researchers, a strong Tsunami hit the city in 10th millennium B.C and that sank the city of Atlantis into the Ocean. Though this is something the researchers say, the archeologists still are in the hunt of the actual truth. 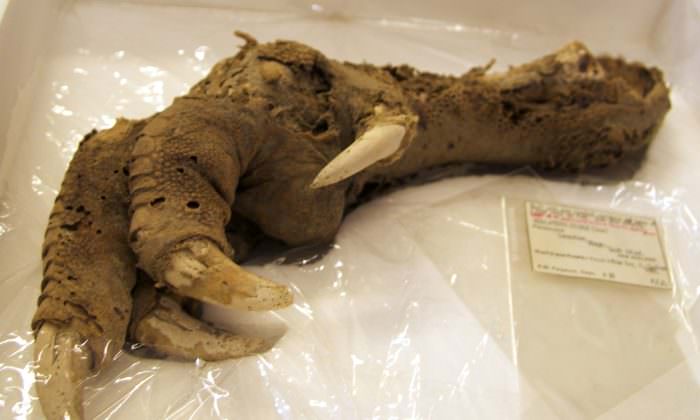 In 1986, a group of archaeologists discovered a bird claw while digging down a New Zealand cave. The muscles and flesh of the bird are still attached to it. The archeologists later found out that the foot was that of a wingless bird named Moa that is now extinct. It actually had completely disappeared from the world about 2000 years ago. The wingless Moa was a huge and heavy bird which weighed up to 250 kg. And, it had a height of 12 feet. The claws of this bird have been kept in New Zealand’s natural history museum.

These discoveries are not only weird but also very interesting. It gives us an insight of something that we otherwise would never have known. Hope you enjoyed the list of weirdest discoveries ever made.