Despite the rapid development of science and technology since the 20th century, it is undeniable that we still face a myriad of mysterious phenomena that are unscientific. What do we know about the weird events that have taken place in various parts of the world?

With the constant growth of the annual rings, everything around us has changed all the time. However, the following ten mysteries are indeed the mysteries of the events. The more the millennium, but so far it is still a mystery.

10. ”The no return” mysterious island

Near Rudolf Lake in Kenya, there is a mysterious island called “Envaitenet”, which means “no return” in the native Aboriginal language. The island is only a few kilometers long and wide, and the locals do not live on the island because they think the place was cursed, and the people who come here will disappear mysteriously and will never go back.

British explorer Vivian Foss led an expedition in 1935 to explore the area, and his two colleagues, Martin Scheverries and Bill Dyson, traveled to this mysterious island first. Five days later, two scientists did not return to the station. Flows dispatched the rescue team to that island, but they didn’t find any sign of Martin’s or Bill’s presence or activity, and there was only a deserted Aboriginal village on the island.

The island seems to have been completely abandoned. Flowserve also dispatched a plane to survey the island but found no clues. Local residents told Flows, many years ago, humans lived on this island. They relied on fishing, hunting, and exchange of specialties with residents outside the island for a living. However, for some time, residents of the island suddenly disappeared outside the island.

Several men outside the island went to the island to explore what happened. When they arrived on the island, they were stunned by the sight they were seeing. The village was abandoned. The house was left intact. And, the fish was still on the extinguished fire. Where did the island inhabitants go? Since then, no one lives on this island except for birds.

Li Qingyuan (1677-1933), who enjoyed 256 years of life, is a Chinese medicine scholar from late Qing Dynasty and early republic. At the age of 100, he was particularly rewarded by the governments for his outstanding achievements in traditional Chinese medicine. While he was 200, he often went to university for lectures.

Li Qingyuan married 24 wives throughout his life, offspring full house. Why he can live to 256 years old?

It is one of the most mysterious mysteries on the planet. The lake is located in the Grand Canyon in Scotland with an average depth of 200 meters. In April 1934, London doctor Wilson took a picture of a monster with a camera, clearly showing the characteristics of monsters; Long neck and flat head, looks like a plesiosauria extinct more than 70 million years ago.

On the state highway in Idaho, United States, about 14.5 kilometers from Lyme McMurray, there is a horror rollover zone that drivers call the Idaho Devil Triangle. Once in the normal driving vehicle will be suddenly thrown into the air by a mysterious force. Then fell heavily to the ground again, resulting in heavy casualties of the car accident.

The famous Stonehenge site is located on the Salisbury Plain more than 100 kilometers southwest of London, England. And, it is the most famous and mysterious prehistoric site in Europe. Built 4300 years ago, the main body of the stone array is arranged by a huge stone column into several complete concentric circles. The outer circumference of the stone array is about 90 meters in diameter ring soil and ditch. Small boulders have 5 tons, a large weighing 50 tons.

In the late 1930s, when construction workers opened the way for banana plantations in the dense jungles of Costa Rica, a dozen mysterious spheres suddenly appeared and their shapes perfectly aligned with the shape of a sphere. The range in size from the smallest to the size of a tennis ball, with a maximum diameter of 8 feet and a weight of up to 16 tons. Almost all globular rocks are made of granodiorite, a hard igneous rock that does not exist locally. This is probably done by hand, but if so, deep in the remote jungle, how primitive humans used simple tools to create such perfectly spherical stones. It still remains a mystery to Costa Rica today. 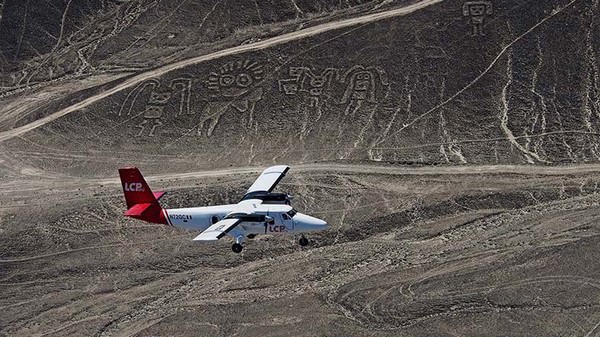 “Nazca Lines” in Peru Nazca regional miles of desert series of lines, geometric patterns described animal shape. These huge patterns can be clearly observed only at high altitude and bird’s-eye view. In fact, the Nazca lines were occasionally discovered by a passing aircraft in the 1930s and scientists have so far failed to explain these lines. The reason for the construction, some researchers think this may be a calendar of accident Peruvian astronomy straight-line forms, to aid cropping and harvesting. The reasons for the formation of these mysterious lines are still different.

Crop Circles have related reports all over the world. The first report was made in the 1970s, however, for the next few decades, more intricate and inexplicable patterns appeared in front of people. Some people think that crop circles may be aliens or the Earth itself and human exchange means. Others think that these special images are created by cyclone and abnormal weather conditions. Some, but not all, of these can indeed prove to be artificial mischief. Those who insist the crop circle is a natural phenomenon point out some of the features found on the affected crops, such as woven straws, such as the cytology of grains. Strange phenomena such as inexplicable instrument failure and weird sounds were also supported by the study of crop circles.

Dinosaurs are the most amazing animals in the universe. There are many unsolved mysteries in the universe. The most important one is how dinosaurs are extinct. The fans of the demise of the dinosaurs, have been confused for many years, such as geomagnetic reversal, said acid rain, climate change, said gender imbalance, ocean contraction said volcanic eruption and so on. The truth of the mystery of the extinction of dinosaurs will always be a mystery that no one can solve.

Bigfoot is a larger, hirsute, apes-like creature that, according to eyewitnesses, predominantly found in jungle areas of the United States and northwestern Canada. Reaching 6-10 feet in height and weighing more than 500 pounds. The whole body covered with dark brown or light red hair. Eyewitnesses described them as having lager eyes, with a ridge-like brow bone resembling ape and a narrow forehead. Round top and hair, very similar to male gorillas. Big foot savage footprints left 24 inches long and 8 inches wide. It has five toes and is very similar to apes but other eyewitnesses and researchers say that the Bigfoot has 6-8 toes and that they are experiencing an unpleasant odor on their body.