India is the home of some of the most unique and interesting people in the world. This country has poorer than the poorest and richer than the richest. It has one feet in past and another in future. India is simply an amazing land. The country is also a home of more than 1.2 billion people, and we can realistically expect some crazies living there. This list is about those crazy people who made these strange Guinness world records. Take a look at 10 most bizarre world records made by Indians. You may also like to know; why living in India is blissful? 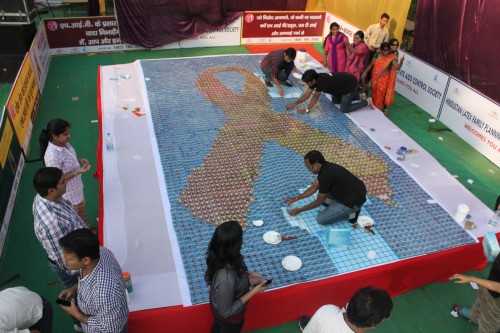 India is currently facing countless problems due to overpopulation, and if you use internet, you most certainly know the reason of overpopulation. Hence, creating a Mosaic made out of condoms was an attempt to create awareness in people, and encourage them to use this amazing and easily available contraceptive, not only to control population but also reduce the risk of STDs. 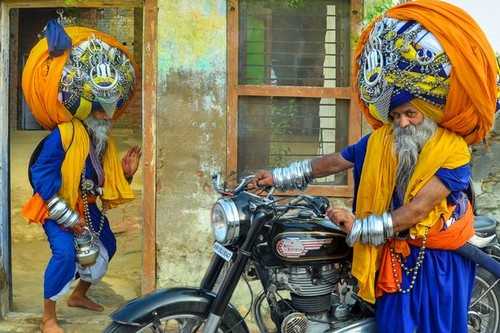 Avtar Singh Mauni is an ordinary Indian man, but has one extraordinary feature, he wears the world’s largest Tubman.

Turban has been an important part of Sikh religion since the very beginning. But this holy man wears an extra large headgear that weighs a whopping 100 pounds. It takes him about 6 hours to wear, and he’s been doing it for past 16 years. No matter how weird it may look to us, but for Avtar Singh it’s no burden.

8. Most Number Of Flags Tattooed On A Person Body

A 70 years old man known as Guinness Rishi holds the record of a person with most flags tattooed on body. He has flags of 305 different countries, 185 country maps, 165 mini flags and 2,985 characters on his body. But this world record isn’t without some problems, apparently his wife say she will leave him if he gets more Tattoos. >> Top 10 Tattoo Fanatics You Can’t Comprehend. 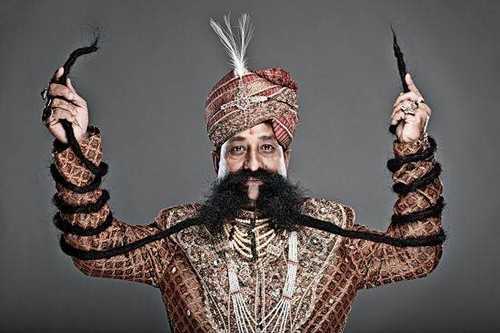 The named Ram Singh Chauhan has an extra large mustache that measures 4.29 m (14 ft). It was measured on the set of the Italian TV show “Lo Show dei Record” in Rome, Italy, on 4 March 2010. See also: 10 Most Bizarre Trends You Can’t Fathom. 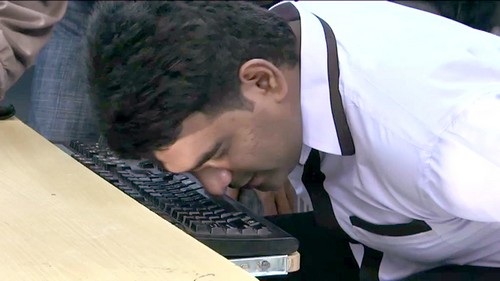 Khursheed Hussain recently broke another Guinness World Record using His nose. He typed a given sentence by the Guinness World Records which consists of 103 characters including grammar in 47.44 seconds, breaking the earlier record of 1 min 33 seconds which was set by a girl.

5. Most Hugs By An individual In An Hour 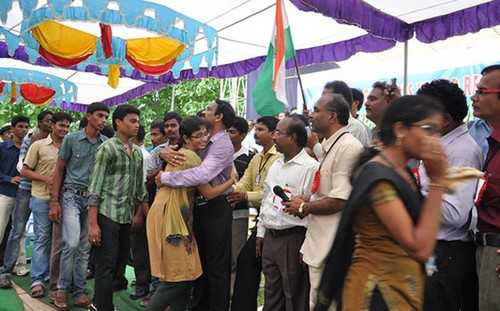 How bizarre could something look than a person hugging every stranger on the road. The most hugs given in one hour is 2,436 and was achieved by Jayasimha Ravirala on 29 September 2012. Jayasimha Ravirala holds several other Guinness World Records titles.

4. Most Number Of Gandhi’s At one Place 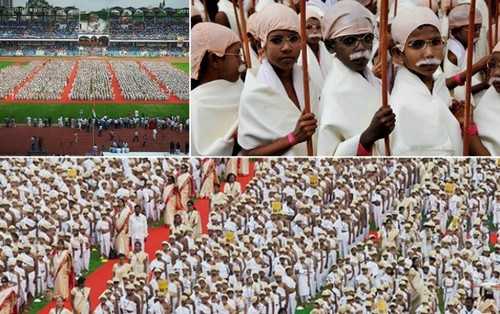 Yes you read that right, this is really something in the book of Guinness world records.

The largest gathering of people dressed as Mohandas Gandhi is 4,605 and was achieved by Venkat, St Ann’s & Venus group of institutions (India), on 2 October 2015, which was 146th birth anniversary of Mohandas Gandhi. 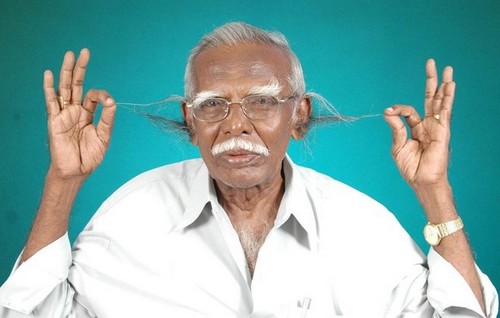 This weird world record was made by Anthony Victor, who has hair sprouting from the center of his outer ears (middle of the pinna) that measures 18.1 cm (7.12 in) at its longest point. Anthony is a retired headmaster known by his pupils as the “ear-haired teacher”. 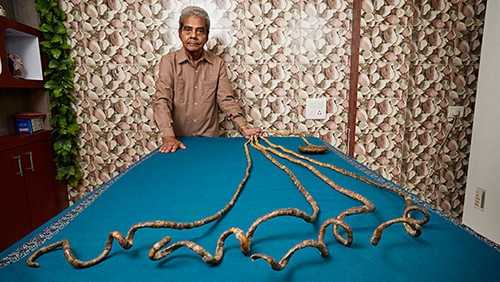 Shridhar Chillal (born 1938) holds the world record for the longest finger nails ever reached on a single hand, on any living person. His nails has a combined length of 909.6 centimeters (358.1 inches). Chillal’s longest single nail is his thumbnail, measuring 197.8 centimeters (77.87 inches). He stopped cutting his nails in 1952. Obviously it caused a lot of problems due the weight he carry, but that’s his choice of life. He expects his nails to be preserved by museum after his death. See Also: Top 10 Men You Won’t Believe Are Real.

1. Most Worms Eaten In A Minute 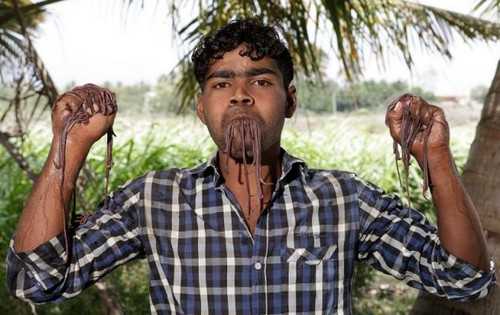 John Peter, 23 years old Indian man is very normal looking guy, until you find that he has one weird habit – he eats insects.

His diet consists: a breakfast of dosa and earthworms, a dinner of Dal and dragonflies, and 10 or 20 lizards for a mid-day snack. He holds Guinness World Record for most earthworms eaten in a minute. Sounds disgusting, which is the reason it’s the most bizarre world record made by Indian. See Also; 10 Unbelievably Bizarre Eating Addictions.