Here’s a look at my top 10 fashion films, a list of movies representing fashion from every era — the era of the rich-and-not-so-industrious. Have a look! Enjoy! but be sure to leave a comment to let us know what we’ve missed. 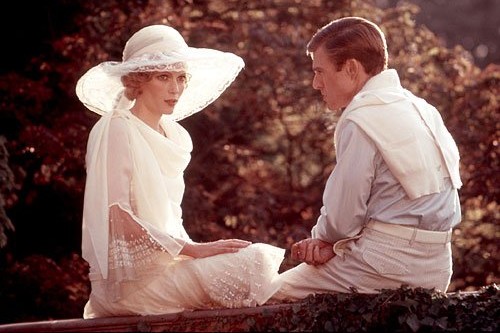 The 1920s come alive in Baz Luhrmann’s bombastic retelling of F. Scott Fitzgerald’s literary classic. But bright colors, bombastic editing and Leonardo DiCaprio’s compelling portrayal of the troubled Gatsby aren’t the only things that make this movie so watchable—the production’s dedication to the time-period’s fashion (with a few modern embellishments, of course) evoke the magic of the bygone era. Men walk around in bowties, three-piece suits and wear colorful suspenders. Their grooming is immaculate, with trimmed mustaches and effortlessly shaped hair with a part that you could measure with a ruler. Good look, old sport!

Flapper fashion was the rage of the time, captured by the women of Gatsby. Short dresses that were fun yet feminine were extremely popular, not to mention the fringe, feathers, beads, scarves and glasses that accompanied each outfit. It was a loud exciting time of music, art and literature, and the clothing reflected that. 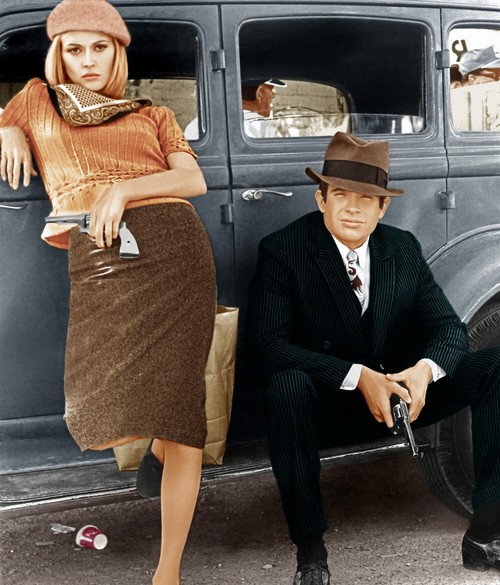 The ’30s were desperate times. The United States were stuck between two World Wars. The mid-west dried up, leaving countless farmers without crops; and thousands of families went without work and struggled to eat through The Great Depression. It was these desperate conditions that set the stage for Bonnie Elizabeth and Clyde Chestnut Barrow’s murder and robbery spree through Texas in the early ’30s.

Director Arthur Penn captured their legacy in this 1967 award-winning and incredibly violent (for the times) movie Bonnie and Clyde. The fashion of stars Warren Beatty and Faye Dunaway—playing the respective outlaws—mirrors the desperation of a nation trying to hold onto its dignity. Beatty wears dark and drab-colored three-piece suits, which are both dashing and sinister. Duanway, on the other hand, stands out with her elegant dresses, her ever-present beret, and—at one point—her iconic, yellow sweater. 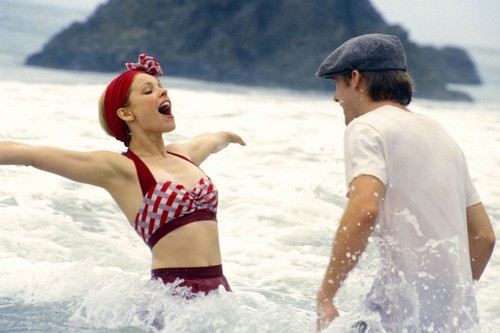 Coming out of the hardships of the 1930s, the United States entered a time of regrowth and prosperity in the ’40s. The drab clothing of the Great Depression gave way to a more tailored (though still-utilitarian) look, and Hollywood became a bigger influence on fashion than ever before: men dressed more (comparatively) more casual and, of course, the pin-up girl became an icon. If there’s a better time-period to set a romantic movie, we don’t know about it.

But The Notebook is not just a romantic movie, it’s perhaps the romantic movie. Based on the novel by Nicholas Sparks the film stars Ryan Gosling and Rachel McAdams playing a couple whose love is jeopardized by class and circumstance. McAdams is stunning with her elegant, floral-print dresses, while Gosling dons a casual working man’s attire which includes flannel, short-sleeves and unbuttoned collars. 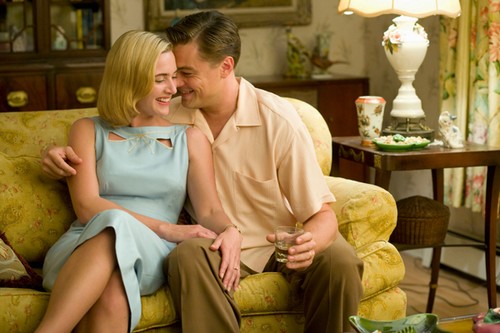 Suburbs, black and white TV, domestication, dinner parties, the perfect family—these are the images that spring to mind when we think of the ’50s. But everything was not as wholesome as Leave it to Beaver and advertising from the time led us to believe. Anxiety and unrest bubbled just under the surface; the lonely housewife has since become a symbol of the malaise that came with superficial prosperity. Richard Yates’ 1961 novel Revolutionary Road addressed the striking disparities between surface and content head-on, and the fashion displayed in the 2008 movie adaptation has fun with that theme as well.

In the movie, Leonardo DiCaprio reunites with Titanic star Kate Winslet, playing an apparently “perfect” couple, whose relationship is wrought with conflict. Winslet wears in stereotypical ’50s “housewife” attire: pastel colors, sundresses and tied-off shirts—and often flaunts their excesses with formal gowns. DiCaprio, too, wears pastel-colored short sleeves, as if to convey to the world: “everything is fine.” 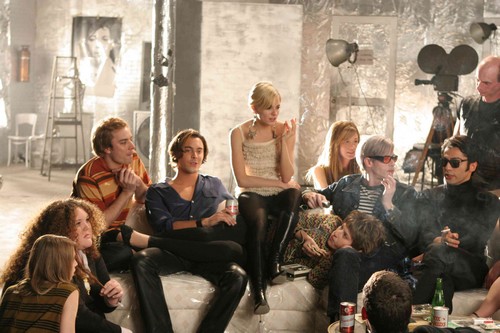 The ’60s was a period where the societal tensions that percolated just underneath the surface during the ’50s finally rose to the surface. Civic unrest, mass protests and revolutionaries shaped this period. But society wasn’t the only thing changing during this decade—art, music and literature expanded in radical ways as well. And at the forefront of this new art stands a single figure: Andy Warhol.

Factory Girl, a biopic that tells the story of the famous artist and his muse, Edie Sedgwick—a socialite, model, and actress. They were such public figures that they acted as forefront of fashion the time: Warhol and his business/bohemian style made office-workers everywhere ditch their ties in favor of a turtleneck. Sedgwick had the signature look of cropped hair, black leotards, mini dresses, and large chandelier earrings. 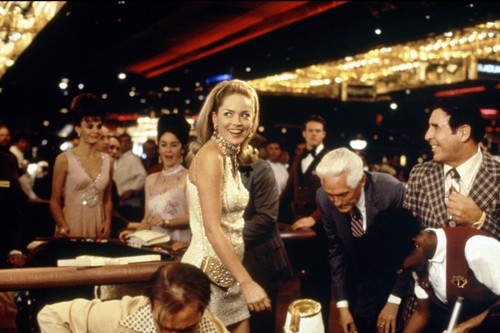 When people think of the ’70s, they think of disco. Although it was such a short-lived phenomenon, it was so potent that aspects of it showed up everywhere, including fashion. Polyester was king, as were bell-bottoms and leisure suits. Men’s collars grew to magnificent sizes; gold chains and jewelry became standard on both men and women. It truly was a time of excess, and few movies showcase that better than Martin Scorsese’s Casino.

Casino tells the story Las Vegas’ rise to prominence with the help of the mob during the ’70s. It’s a modern retelling of the Wild West where the cowboys, or in this case, mobsters Robert De Niro and Joe Pesci, wear coral/pastel leisure suits. De Niro’s wife, played by Sharon Stone portrays the decade’s excesses better than anyone else: slinking through every scene with gold-colored dresses, extravagant jewelry, and furs. 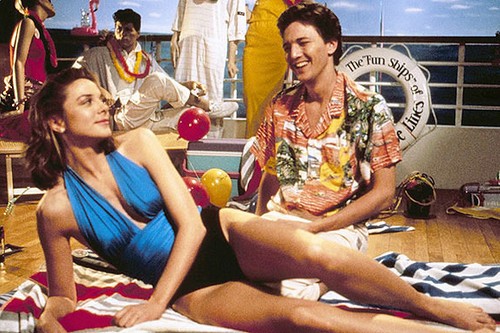 In the ’80s, everything was big: big hair, big clothes and big lifestyles. Young, rich yuppies ruled Wall Street, people brandished credit cards like knights drawing swords, and materialism was almost a religion. Movies of the era also showcased big, unwieldy concepts, and often stuck their noses up at the concept of logic. Just like these movies, the fashion indulged in carefree abandon, outrageous concepts and big changes. Many movies from the era showcase these qualities, but few better than Michael Gottlieb’s 1987 cult hit, Mannequin.

Mannequin follows a lovelorn artist played by Andrew McCarthy who falls in love with the display mannequin, played by Kim Cattrall (of Sex and the City fame) in the department store where he works. Cattrall, playing literal model, showcases some of the best ’80s fashion of the day—everything from pink jumpsuits to neon colors to outlandish accessories. Other characters in the film are even more out two-toned glasses, skinny ties and bombastic hairdos; at one point, McCarthy even wears a hot-pink button-up “business” shirt. 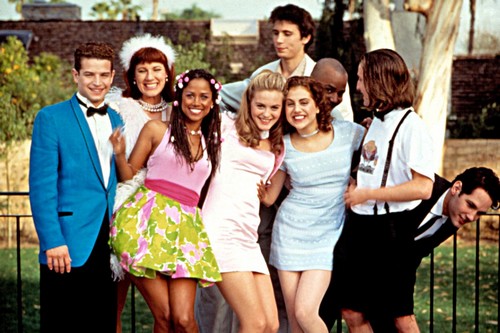 Ah, the 90s, the age of grunge, economic prosperity and Generation X. When Nirvana broke through the veneer left behind by they superficial New Wave and hair metal music—they not only changed the musical landscape, they also changed the fashion. Taking a note from the music scene emerging from the northwest, the population traded in spandex, shoulder pads and neon everything for flannel shirts, ripped jeans and a desire to refuse convention of any kind.

This attitude is especially prominent in Clueless, the 1995 starring Alicia Silverstone in her breakout role. The movie, set at a southern California high school, features many disparate fashions among the cliques, yet all are distinctly ’90s with their shared denial of a common aesthetic. Silverstone and her preppy friends wear designer clothes, repurposed to look like traditional school outfits. On the other hand, the skater clique wears ripped jeans and flannel as a nod to the grunge era. 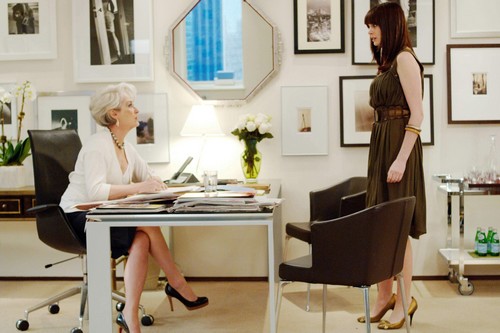 Y2K didn’t destroy our computers, but the ensuing decade proved that we’d become addicted to them. It was in this decade that high-speed Internet became common in every home, and the advent of iPods and iPods guaranteed that that we could take it with us even when we left the desktop. Yes, it truly was the age of information, and with it, an immediate access to all that had come before us. Retro styles (with modern modifications) came back in a big way, and no movie exemplifies this more than The Devil Wears Prada.

In the movie, Anne Hathaway‘s character lands a job as a high-powered fashion magazine editor’s assistant, played by Meryl Streep. This being a story about fashion, Hathaway displays a number of stunning outfits, including an elegant black dress—a definite nod to the Hollywood stars of the ’40s. Even the ’30s make an appearance, when Hathaway wears a newsboy cap as an accessory. 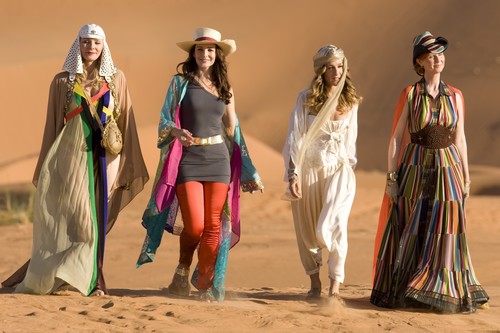 We’re only halfway through the decade, but with the rise and omnipresence of social media and smartphones that are readily available for anyone minute-to-minute, up-to-date updates, it’s safe to say that we’re living in the Age of Me.

The fashions and attitudes of Sex and the City 2 are built on this notion. The plot follows a group of four unapologetically self-absorbed women as they navigate their respective conflicts, yet always have time to find, buy and showcase the most extravagant, designer clothes. In fact, it may have been Carrie’s (Sarah Jessica Parker) obsession with shoe designer Steve Madden that made the brand so coveted among the young elite.

Written By: Megan Gallagher (Working for The Many Sides)