There are plenty of famous queens out there. Cleopatra, of course, is famous for her dalliances with Caesar and Marc Antony (leading to its fall to Rome). Elizabeth I managed to defy everyone to transform England from a backwater protestant state to the nation that defeated the most powerful empire and religion in the world. Queen Victoria was so significant her name now represents nearly a century of world history and culture. There are, however, many other queens in history, and some of them led lives that will surprise you. Here are the top 10 surprising queens. 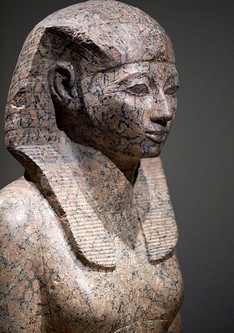 Egypt is famous for its architectural wonders, with the Pyramids still ranking as one of the most impressive civil engineering projects of all time. Hatshepsut had no involvement with their construction, being about 1,000 years too young, but she might as well have built everything else. It is likely she built more of Egypt’s famous sites than any other pharaoh in Egypt’s history.

Perhaps the most surprising thing about Queen Hatshepsut was that she didn’t actually rule as a queen. After essentially deposing her own son, Hatshepsut ruled for around 22 years as the King of Egypt, wearing men’s clothing (bare chest and all), and donning a fake beard, making her not just a powerful ruler, but the history’s most powerful cross-dresser. 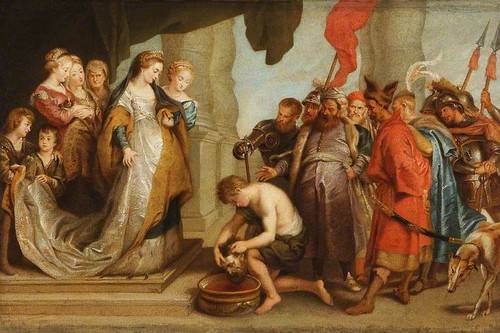 The Greeks are famous for standing up to powerful Persian emperors, but they were walking in a woman’s footsteps when they did so. Tomyris had beaten the Greeks to that whole defiance of Persians thing by a good 40 years. What’s more, she was better at it as well.

Tomyris was the queen of Massagetae, a nomadic people living in the Central Asian Steppes. When Cyrus the Great came along looking to conquer the place, he managed to capture Tomyris’ son through a dirty trick (he got his opponents drunk before the battle). This prompted her son to commit suicide.

Understandably put out by this Tomyris sent what is probably history’s first “Hacks!” message denouncing him as a cheater and daring him to a second battle. Cyrus went for it, and proceeded to get his royal rump royally kicked.

It wasn’t Cyrus’ defeat that is the real shocker of Tomyris’ life. It was what she did after. Still not satisfied with just crushing Cyrus’ army, she proceeded to behead Cyrus, crucify his body, and use his skull as a drinking cup. This, of course, means she was totally goth before it was cool. 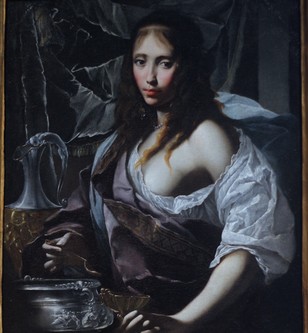 Artemisia I of Caria also had a thing about Persians, though in her case she sided with them against the Greeks, even though she herself was a Greek. When Xerxes attempted to succeed at what his father, Darius I, had failed to do (conquer Greece) Artemisia was asked to provide ships for the attempt.

Artemisia did more than she was asked for. When Caria’s five ships arrived she showed up right along with them. She then proceeded to provide him with very wise advice about how to fight the Greeks (which he ignored) then went on to prove to have the best ships and the biggest cojones of the entire Persian Navy. Her performance at the disastrous battle of Salamis stood out so much against everyone else that Xerxes lamented “My men have turned into women and my women men.”

After Xerxes withdrew back to Persia he gave Artemisia a suit of armor, his personal thanks, and direct supervision of his own heirs, making her history’s most awesome battle babysitter.

Boudica’s story is pretty much the epitome of the saying about scorned women. Her husband had been the King of the Iceni tribe in Roman Britain. When he died, Boudica took over, intending to continue his policy of being an ally to the Romans. Unfortunately the Romans didn’t feel like playing ball with a woman. They declared sovereignty over her lands, flogged her, and raped her daughters.

This proved to be a Bad Idea. Boudica turned around, stripped naked, painted herself blue, and led not just the Iceni, but several other tribes as well, in a clothing optional roaring rampage of revenge. By the time the Romans were finally able to stop her Boudica had killed around 75,000 Romans, destroyed their three largest British cities, pretty much wiped out every Roman farm and settlement in the Southeast of Britain, and destroyed two full legions of professional Roman infantry. 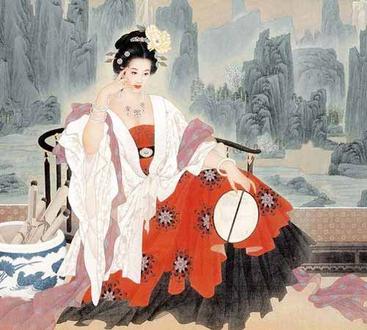 Wu Zetian was the only woman in the history of China to rule in her own right. Her reign was one known for its works of construction, advancement of the arts, and emphasis on education. It is not, however, the fact she was China’s only female emperor in name, but Wu herself that is fascinating.

Highly educated, Wu became a concubine in the Imperial court at the age of 13. She soon stood out. The Emperor had a horse that simply could not be tamed. Wu proceeded to brag that she could do the job, stating she only needed three things for it, an iron whip, a hammer for in case the whip was not enough, and a dagger to kill the horse if even the hammer would not tame it.

When the Emperor died custom demanded that she shave her head and become a nun. Wu basically gave that idea the finger. She seduced her stepson, the new emperor, became his second wife, had a few children, murdered one of them to frame the first wife, conducted a putsch to eliminate anyone at court she disliked, and then took over. During her reign she would famously have an affair with a Buddhist monk, and no one dared say “Woah, wait. You’re getting it on with a monk?”

What Wu was for the Chinese, Catherine the Great was for Russia. While her reign was considered to be a golden age for Russia, Catherine herself was a considerably colorful figure who ruled as an absolute despot.

She absolutely despised her husband, Peter III. Even though they both were, in fact, German, Catherine had thrown herself into becoming more Russian than the Russians, while Peter pretty much looked at Russia as something he could use to the benefit of Prussia. She proceeded to have an entire series of affairs, became tight with several groups opposed to Peter, and plotted his downfall. Six months after his becoming Tsar, he was dead and Catherine was happily seated on the throne.

While her reign would prove very beneficial for Russia, it would also be quite the soap opera. She had a large number of lovers, many of whom wound up being given positions of power or state pensions. Some would even be required to select her next lover when the affair was ended. Her proclivities were so well known that it was rumored that they even involved her favorite horse. Two of her three children were the result of these affairs. (Not with the horse.)

Many people tend to forget that Hawai’i was a kingdom long before it became a U.S. territory. Queen Lili’uokalani was its last reigning monarch. Hawai’i was one of the few nations to choose its monarchs from amongst all of the qualified heirs and an electoral process in the legislature.

Though everyone who remembers her as Lili’uokalani, that was not the name she was born by. She was born “Lydia Paki” and adopted. At the time the king’s wife was suffering from a painful eye infection and, for some reason, gave Lydia a name that reflected this, Liliʻu Loloku Walania Kamakaʻeha (“sore, burning, tearful eyes”). When her brother was declared king, he declared her to be a princess and named her Liliʻuokalani. This means her full legal name was Lydia Liliʻu Loloku Walania Wewehi Kamakaʻeha-a-Kapaʻakea.

After being overthrown by Americans in Hawai’i Lili’uokalani would become an accomplished writer and singer, writing down many of the stories of the Hawai’ian culture as well as composing one of Hawai’i’s most famous songs, Aloha Oe. 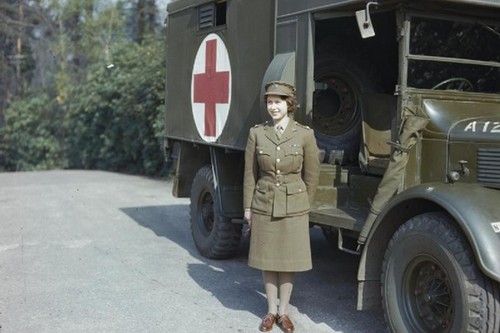 Queen Elizabeth II is Britain’s current reigning monarch. At 88 years old she is the second longest lived ruler of England in history. She is also set to become England’s longest ruling monarch later this year, on the 9th of September.

For the British Royal Family active military service has continued to be a tradition in a time when most royal families have taken symbolic positions or stayed away completely. Elizabeth’s grandchildren, William and Henry, both have served on active duty, with Prince Henry serving two deployments in combat in Afghanistan. What many people likely do not realize is that Elizabeth herself is an army veteran.

Quite the looker, Princess Elizabeth turned 18 on February 6th, 1945. World War II was still very much a going concern at the time, and Elizabeth join the Auxiliary Territorial Service, the women’s auxiliary for the British Army. She was trained as a truck driver and mechanic. She would serve the remainder of the war in Number 1 ‘Beaufront’ Company, ATS. She would be mustered out at the end of the war with the rank of Junior Commander. Rationing still being in play, she would go on to save up enough rationing coupons to pay for her wedding dress with them. 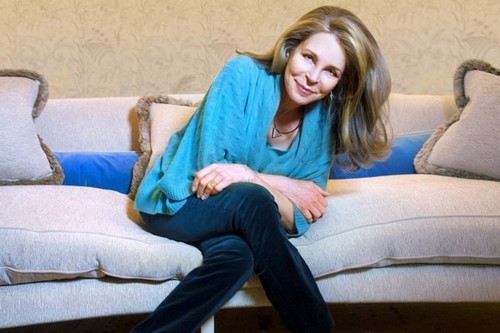 Queen Noor of Jordan is one of only a handful of American queens. Her father was Deputy Assistant Secretary of Defense under President Truman and served as the Head of the FAA under Kennedy. Born Elizabeth Najeeb Halaby, she received a BA in Architecture and Urban Planning from Princeton.

After working in the U.S., Australia, and Iran, Halaby accepted a job in the airline her father had started, Arab Air Services. There she was to become the Director of Facilities Planning and Design. As part of this work she became involved in the design of the Queen Alia International Airport south of Amman, Jordan. King Hussein of Jordan had named the airport after his previous wife, who had died in a helicopter accident earlier that year, and took a direct interest in the airport’s development.

Halaby became Queen Noor of Jordan in 1978 as a result of the friendship that formed with the King during the airport’s planning. Widowed in 1999, she would be an outspoken supporter of Jordan and become actively involved in international relations, a role she continues to play to this day. 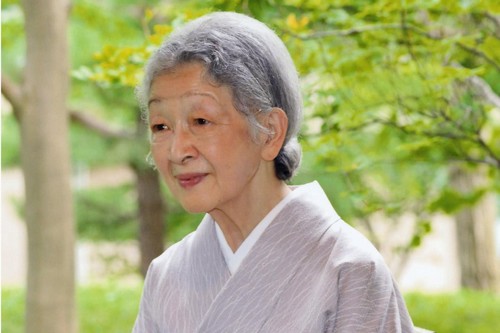 Empress Michiko was rather a surprise to Japan. When word came down that the royal family was seeking a bride for crown prince Tsugunomiya Akihito (now Emperor Akihito) everyone expected that his future consort would be a very traditional girl from within the extended royal family. What they got was commoner Shoda Michiko, a Roman Catholic with a BA in English Literature and the nickname of “Temple-chan” because of the resemblance of her curly, red-tinted hair to that of Shirley Temple.

Michiko had met the crown prince in 1957 on a tennis court. Akihito’s mother did not approve of the young woman, and a number of influential politicians and members of the court were opposed to any wedding between a commoner and Japan’s heir presumptive. Michiko won over the hearts of the masses however, with the romantic overtones of the “romance of the tennis court”.

Michiko has been a shocker to the royal traditions ever since. Breaking with royal tradition, she has since directly raised all three of her children (even breast feeding them), written books for adults and children alike, made frequent trips throughout Japan to meet with everyday people, and visited dozens of nations. Her most shocking habit of all? She, her husband, and her son, Crown Prince Naruhito have formed a household band. She’s the pianist.