Now, we all know that we should not expect rocket science form celebrities. But, sometimes, these celebrities even make us feel guilty of the fact that we expected them to have common sense. Here is a list countdowning 10 of the Most Dumbest Celebrity Statements. Get ready to be amazed!

“I think that gay marriage is something that should be between a man and a woman.”
Yes, that’s what 67 year old Austrian-born American actor, filmmaker, activist, businessman, investor, writer, philanthropist, former professional bodybuilder, and politician Arnold Schwarzenegger said about gay marriage. Like really? Vow! Although I doubt whether Arnold mistook the word gay for a synonym of happy. But, enough of giving these celebrities benefit of doubt. It’s just that they are dumb, and they are happy about it. 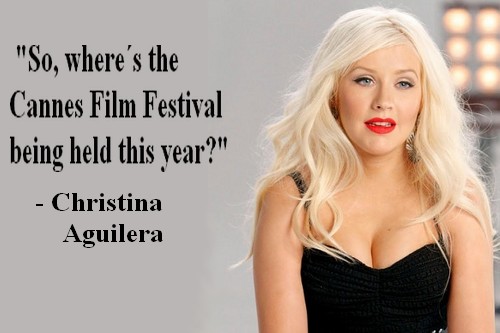 “So, where´s the Cannes Film Festival being held this year?”
33 year old American singer, songwriter, and actress Christina Aguilera had this awesome question in her mind. Now, it is possible that you don’t know anything about everything in the world, but isn’t it better to shut your mouth, and more so, in a public place? The PR team Aguilera, you are not working guys!

“Is this chicken, what I have, or is this fish? I know it’s tuna, but it says ‘Chicken of the Sea.’ ”
34 year old American singer, songwriter, actress, and fashion designer had this query while filming for her TV show, which she asked her husband, which left him amazed! Now, as we said before, it is absolutely ok for you to not know things, many people who are not acquainted with the food, probably would ask the same question. But Simpson, when you ask for your life to be filmed for a TV show, you got to be careful of such issues. And also, you belong to a country where these food are almost staple. You may also like; 10 Celebs who were cheerleaders.

“I definitely want Brooklyn to be christened, but I don’t know into what religion yet.”
39 year old English footballer, apparently has more skills than just the balls to amaze people. When asked about his new born son Brooklyn, Beckham had this huge dilemma into his mind. Well, we can only hope for the sake of his son, that he got his answer correct. And, not to forget, he became father to three more children after tis. So, we wonder what happened to their religion. You may also like; Top 10 Most Stylish Athletes.

“Smoking Kills. If you’re killed, you’ve lost a very important part of your life”
49 year old American actress, model and former child star had this ‘intellectual’ advice for all smoker in the world. Now after this, we are not sure whether they quit smoking or not, but they definitely had a cerebral attack after hearing this. You may also like; 10 Not So-Dumb Hollywood Celebs.

“What’s Wal-Mart? Do they sell, like, wall stuff?
33 year old American socialite and actress had this query, which we all hope somebody has answered her. Now, why can’t you access the internet before going out in the public and giving away such scandalising statements, like really? They are to die for! Even if you don’t know about it, why do you need to make out a answer like you did here by saying “Wall Stuff”. It only will add feathers to your already fooled personality. Here’s another great list; 10 Hollywood Celebs with Traumatic Past.

“I can’t really remember the names of the clubs that we went to.”
Now, this statement, when read alone, does not sound strange or dumb, but as we all know, looks can be deceptive. This is actually an answer to a question as to whether he had visited the Parthenon during his visit to Greece. So, 42 year old American retired basketball player, former rapper, actor and current analyst on the television program Shaquille O’Neal gave this reply. Well, that speaks volume about what you did there on your trip, boy! Another list, you might like it; 10 Greatest NBA Players of all time.

“I’ve never really wanted to go to Japan. Simply because I don’t like eating fish. And I know that’s very popular out there in Africa.”
32 year old American recording artist Britney Spears really taught with this statement that we all must take our geography classes much sincerely than we do.

“Food is an important part of a balanced diet.”
64 year old American author and public speaker Fran Lebowitz made jaw-dropping statement. Vow! Lebowitz! Thank you, for educating and enlightening our thoughts. We would have never known if not for your super intelligent statements. You might like this list; 10 Most Bizarre Authors in the World.

“I have this weird thing that if I sleep with someone, they’re going to take my creativity from me through my vagina”. – Lady Gaga

Here are some other great lists, you may like them; 10 Most Bizarre University Courses. And the Top 10 Richest Celebs, How they got there?