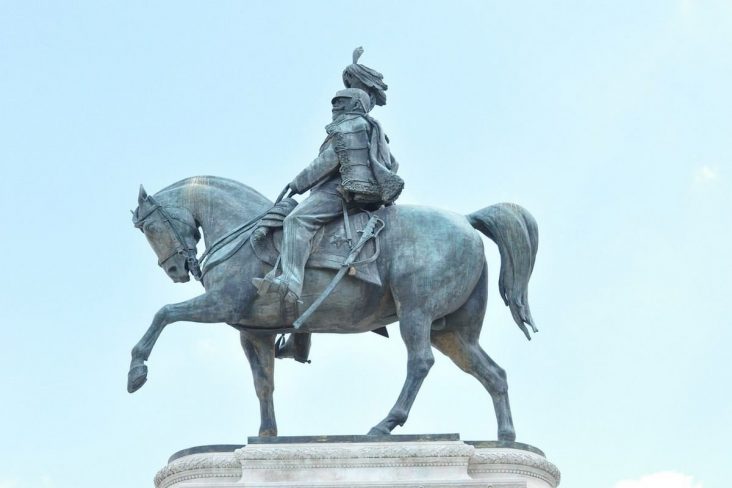 Horses had been faithful companions to Man for a long time. Most of them who found distinguished places in history were undoubtedly racehorses. However, there are a fair few which became famous for their undulating loyalty and service to renowned warriors and militaries in history. They witnessed and took part in many battles, carrying their masters to their success or failures. Here are ten famous war horses whose names could not be forgotten by the history.

TOP 10 most famous war horses, whose stories deserve far more attention than they typically get.

Chetak was the horse of Maharana Pratap, the king of Rajputs of North India. The stallion was killed from an injury it suffered in the Battle of Haldighati, on 21 June 1576. The battle was fought between the Rajputs and the Mughals. Pratap built a monument for his horse at Haldighati, where Chetak fell. It is located in Rajsamand district in Rajasthan. Chetak appears in many ballads and folk tales of the locals. He is mentioned as ‘blue horse’ in many poems, due to the blue tinge it had on its coat.

Bucephalus is perhaps the first celebrity horse in history. The stallion was the favorite of Alexander the Great, one of the greatest warriors ever. Described by the historians as a massive creature, Bucephalus was acquired by Alexander at the age of 13, according to legends. It accompanied its master in numerous battles. The horse was killed from the fatal injuries it gained in the Battle of Hydaspes fought between Alexander and Indian king Porus in 326 BC. In the memory of his favorite horse, Alexander built a city named Bucephala on the banks of the river Jhelum. It is situated in the modern-day Pakistan. The Pak town Phalia is also named after the historical horse where it is believed to have died.

Traveller was the favourite horse of General Robert E. Lee, commanding officer of the Confederates Army during the American Civil War. A grey American Saddlebred, he was born in 1857 and was originally named Greenbier. He was bought by Lee in 1862. The horse was known for its speed, strength and courage in combat. He carried the General in many battles and after the war, accompanied him. In 1871, Traveller developed tetanus and was shot to death to relieve its pain because there was no treatment.

Kasztanka was the famous horse which belonged to Polish war hero Marshal Jozef Pilsudski. Her name means chestnut in Polish, a fact that attributes to her colour. She had been owned by Ludwik Popiel, and came under the ownership of Pilsudski in 1914. She carried her master in many battles of Polish Legions at the side of Austro-Hungary and Germany during the First World War. Pilsudski rode Kasztanka for the final time on 11 November 1927, at the Polish Independence Day parade on Saxon Square, Warsaw. Kasztanka died on 23 November 1927.

Marengo is one of the most famous war horses ever, owned by the former French emperor Napoleon Bonaparte. The stallion was named to honour the Battle of Marengo fought between France and Austria, where it displayed amazing capabilities and carried the emperor safely. Marengo was actually an Egyptian breed, exported to France in 1799. He accompanied Napoleon in his many campaigns, including the Battle of Waterloo in 1815, where Napoleon was defeated by the British forces. Marengo was captured in the war by the British officer Lord Petre, and would go on to live in England till its death in 1831. Its skeleton is now exhibited at the National Army Museum in Chelsea.

Palomo was the horse of Simon Bolivar, the ‘liberator’ of Latin America. He was a present to Bolivar from an elder peasant woman named Casilda who, according to the local lore, dreamed of gifting a horse to a great general. Palomo is described as a tall white horse with a long tail. Since their meeting in 1819, Bolivar rode him on many campaigns during the liberation struggle. Palomo died after a long march, while under the care of one of Bolivar’s officers. Its horseshoes are displayed at the Museum of Mulaló.

Copenhagen was the famous war horse of Lord Arthur Wellesly, the Duke of Wellington. Born in 1808, he was bred by General Grosvenor, and took part in a few races. He was named in honour of the British victory at the Second Battle of Copenhagen. Lord Wellington acquired him in 1813 and rode him in a number of military campaigns. Copenhagen accompanied the general in the Battle of Waterloo of 1815, where he defeated Napoleon Bonaparte. It retired after the battle and spent later years at the stable of the Duke. The horse died on 12 February 1836.

Cincinnati was one of the three famous war horses owned by American Civil war general and later President Ulysses S. Grant. He was the son of Lexington, one of the fastest horses in America that time. A gift to Grant from an admirer during the American Civil War, Cincinnati accompanied the General in a number of campaigns, and was his favourite. Grant is depicted riding Cincinnati in most of his memorials. The legendary Abraham Lincoln was also an admirer of Cincinnati, whom he used to ride every day. The horse died in 1878 at the farm of Admiral Daniel Ammen, located in Maryland.

Comanche was a famous war horse owned by the US Army, known for being the survivor of the Battle of Little Bighorn. The horse was bought by the army in 1868 and it was ridden by Captain Myles Keogh of 7th Cavalry. He was named for his bravery and loyalty in the fight against Comanche, where he carried Keogh even after he was wounded. Comanche carried Keogh in the Battle of Little Bighorn in 1876, in which none of the soldiers survived. Comanche was cited as the lone survivor, though many other horses were found to have survived. He was made a honorary Second Commanding Officer’ of the 7th Cavalry in 1887. Comanche died in 1891. He was given a military funeral, one of the only two horses to receive it.

One of the most famous war horses ever, Reckless was a horse of Mongolian breed, owned by US military. She was bought in 1952 and trained by the United States Marine Corps. The horse was used to carry supplies and weapons and evacuate wounded soldiers during the Korean War. She was known for her intelligence and ability to take solo trips. During the Battle for Outpost Vegas in 1953, she made 51 solo trips in a single day. She was made a sergeant in 1954 and retired. Reckless was once selected as one of the 100 All-time American Heroes by Life Magazine. She died in 1968.