We normally associate flowers with their beauty and sweet fragrance. But there are quite a few species of flowers those are visually appealing but repulsive in fragrance. Some of them are even ornamental flowers. The foul smell they emit is usually to attract pollinators. Here is a list of Top 10 Foul Smelling Flowers – flowers with worst smell. 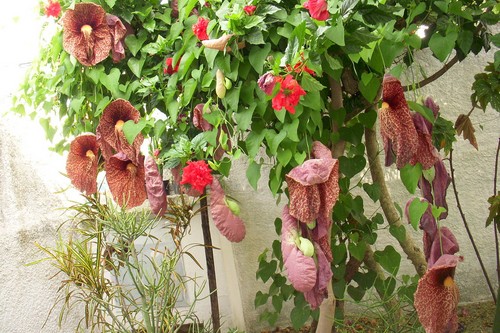 Known in the names of Brazilian Dutchman’s Pipe and Giant Pelican Flower, this is an ornamental plant native to Brazil. Its red-coloured flower emits a smell like faeces which invites bees and other insects, effectively facilitating its pollination. The glossy texture provides further mode of attraction. It has a structure similar to the host plants of Pipevine Swallowtail butterflies, where they lay eggs. Since the caterpillars can’t survive on it, the plant is a general threat to the butterfly. 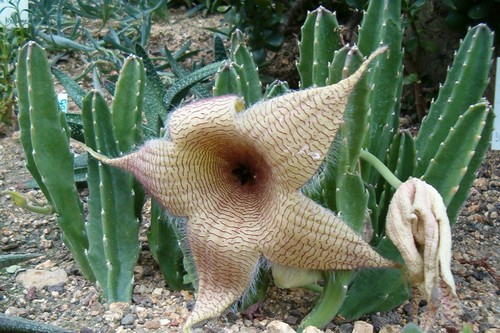 Native to south eastern Africa, this flower plant is also known as toad plant. It disseminates an odor of rotting flesh, mainly to attract the insects who help in pollination. Stapelia Gigantea is a large flower, growing upto 35 cm in diameter, in colour variations of yellow and red. It is often grown as a houseplant despite its bad smell.

Although it is one of the foul smelling flowers, but because of its tender nature and intolerance of extended freezing, it is usually grown as a houseplant. You may also like to see the list; 10 Most Beautiful but Strange Flowers.

8. Jack in the Pulpit 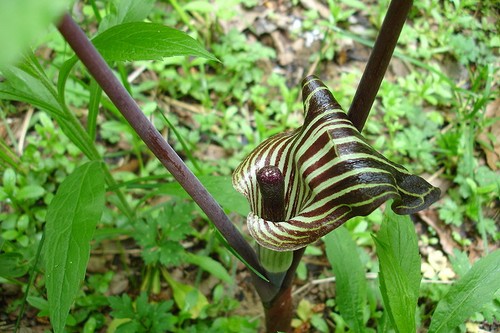 It may be known in various names like snakeshead, adder’s root, wild arum, starch root etc. But, no one will have different opinions about its smell that resembles that of faeces. Jack the Pulpit (Arum maculatum), distributed all over Europe and Turkey, is commonly found in woodlands. The plant attracts the insects with its odor and thermogenity along with the purple spadix. There is a temporary insect-trapping mechanism to aid the pollination. The plant is allergic to humans.

In addition, it is eatable! If the plant is properly dried or cooked it can be eaten as a root vegetable. But keep in mind the oxalic acid in jack-in-the-pulpit is poisonous if ingested. See Also; World’s 10 Most Beautiful Gardens. 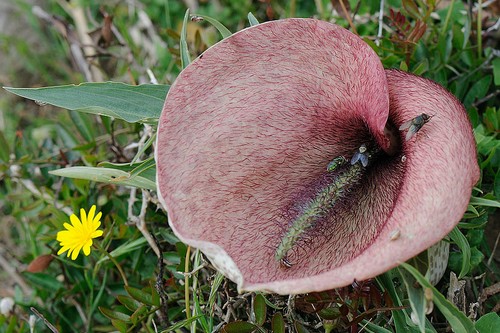 One of the foulest smelling flowers in the world, the Dead Horse Arum Lily (Helicodiceros muscivorus) might have been named after both its appearance and smell. Native to Corsica and the Balearic Islands, it is the lone species of the genus Helicodiceros. The flower emits the odor of rotten meat. It is a thermogenic plant, being able to raise its temperature by thermogenesis, a feature that attracts pollinating insects, along with the dark spathe and the odor. 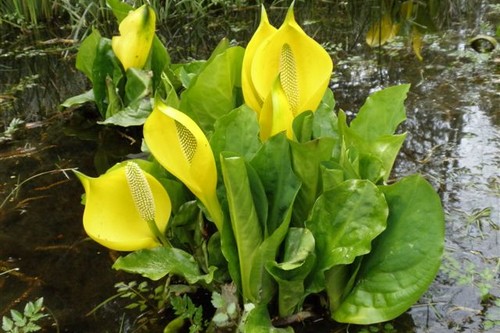 Also known as Swamp Lantern, the Western Skunk Cabbage (Lysichiton americanus) is found in swamps and wetlands, mostly of Pacific. With a large green spathe, its flower gives off a repulsive smell at the time of blooming. The smell stays for a long time, even after the flower is dried. The odor acts as a luring agent for insects that help in pollination. It has various foul smelling relatives like Eastern skunk cabbage as well. 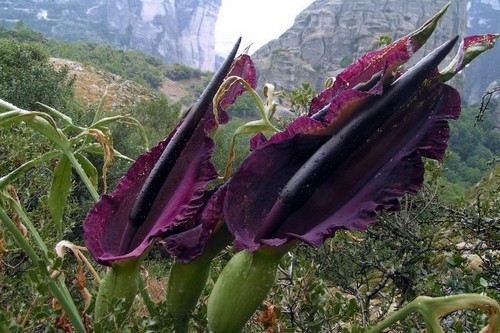 Popular in numerous names like black arum, voodoo lily, snake lily, stink lily and dragon arum, this flower is native to the Balkans and parts of Turkey. It is beautiful, with a mixture of purple and red, but is known to present an umpleasant olfactory experience. The flower gives off a rotten smell, though attracts pollinators, would repulse humans. Nevertheless, it has found its way into northern America and is extending its presence there. 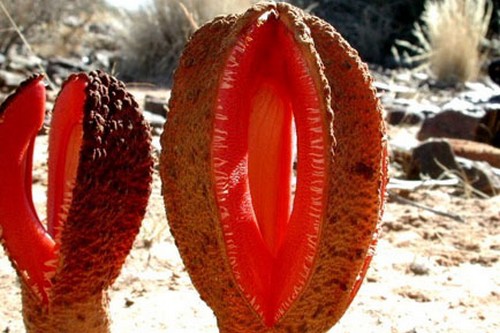 Hydnora africana is a parasitic plant native to southern Africa. Having no chlorophyll, it grows underground except for its flower. The flower emits the smell of faeces which attracts pollinators, and traps them for a short period to ease the pollination. The foul smell is generated by Osmophores, a spongy area in the flower petals. The plant produces a fruit that grows underground and takes almost two years to ripen. 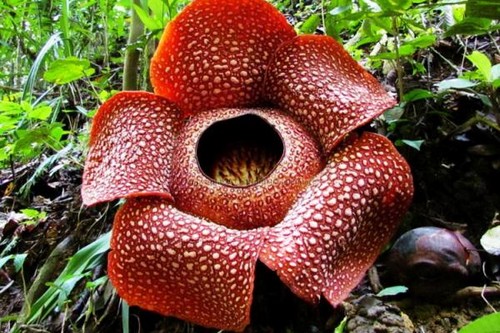 The largest individual flower in the world is also one of the foulest smelling flowers. Rafflesia is good to look at, but less appealing for the olfactory senses. A resident of the rainforests of Indonesia, this flower weighs around 10 kg and usually has a diameter of three feet. The flower is parasitic, and has no roots, leaves, or stems. Refflesia gives of a putrid smell, not unlike that of a decaying body, and is categorised into the carrion flowers. Like the others of its genus, the flower-plant tricks the flies into pollinating it. 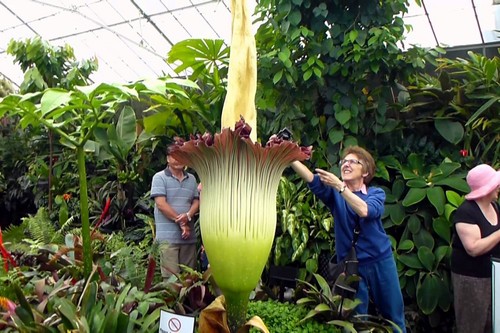 Also known as the Corpse flower, Titan Arum (Amorphophallus Titanum) is native to the rainforests of Sumatra, Indonesia. Having the largest unbranched inflorescence in the world, the flowers are of a deep red colour. The frequency of blooming varies from one to ten years, with the flowers staying for almost a day. It produces a horrible stench while blooming, like the smell of caracass of a mammal. It has been classified as a carrion flower for the same reason. 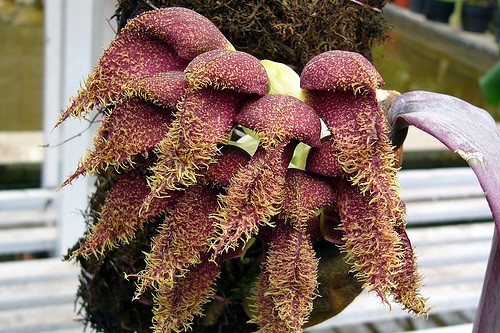 The top position in the list of foul smelling flowers is occupied by Bulbophyllum Phalaenopsis. Native to the island of New Guinea, this flower is a variety of orchids. Found in colours like white, cream, red and purple, the flower emits the odor of rotten meat which attracts flies who aid in pollination. The plant is one of the largest in the genus, with a leaf span of around 4 feet. Despite its foul smell, it is a widely cultivated flower.

The listed above ore Top 10 worst smelling flower in the world. These are some beautiful flower that smells really bad crossword. Also, these are some of the bad smelling plants in the world. If you want smelly flowers for garden, then this list of foul smelling shrub is for you.