In wonderslist, we strive to explore, educate, entertain and generally put a smile on our readers face. It’s therefore safe to say; we’re the Jack of all trades and masters of domain. It’s a common sense ‘’all work and no play make Jack a dull boy’’. Here, we uphold the equilibrium and keep the fires burning; to keep jack in the frame of mind. In our previous articles, we’ve all covered lists. So, I thought it wise to compile ‘’Top 10 Historic Photos You’ve Probably Never Seen’’ to deviate from the monotonous lists you’ve been fed so long. 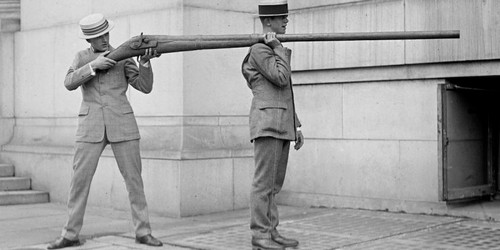 In this photo, two men are seen aiming a ‘’Punt Gun’’. Used in late 19th and early 20th Century, this mechanized shot gun with devastating rounds was probably sufficient to scare an enemy into a quick submission. Equipped with an intimidating looks and high explosive power, these weapons of gore however saw no significant grim battle. Instead they were used to unleash terror on pretty harmless stuff; ducks. High demand for waterfowl and feathers for the eccentric women fashion put a strain on the hunters who in turn opted for the Punt guns. They were right. These death-spitting contraptions would kill over 50 fowl in a single volley. The roosting fowl eventually found reprieve after concerned authorities banned the punts altogether. Reason; the watery stocks were quickly running out. (Imagine what one will do to your head!) 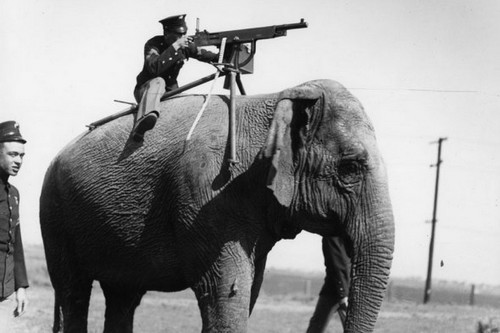 Animals played a vital role in the World Wars and they are one of man’s most venerated friend. To tame these monsters, we had to venture past our fear of gore to transform an elephant into a death merchant. In this publicity snap taken in 1914, an American corporal is seen aiming his M1895Colt-Browning machine gun atop an elephant. Though elephants were a valued possession during wars, pulling a real life stunt was extremely risky as the barreling blast of the gun wouldn’t sit well with the proximity to the jumbo’s sensitive ears. A single shot would probably drive one mad and send it careening to unintended direction altogether. There closer counterparts; horses, didn’t do fare any better. In the grim nature of combats, animals were extremely goofy, bulky and vulnerable. A single shot would disenable the horse leaving the gallantries to dash for cover across the battlefield if they were lucky to avoid sniper bullets. In the mayhem of World War I, approximately 8 million horses were killed.

8. A Soldier On A Mountain Of Shells 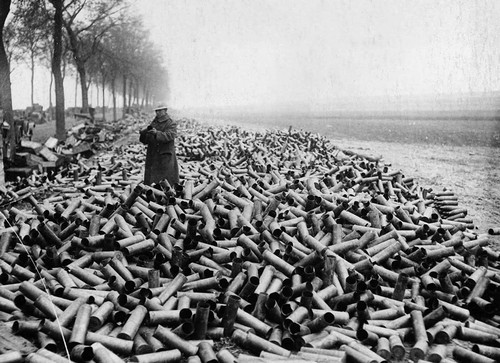 World War I is one the most vicious battle ever fought in history of humanity. What started as a normal outing for Archduke Franz Ferdinand and his wife, an erroneous turn by the driver and sheer coincidence of stumbling upon Gavrilo Princip on a street corner led to the fatal assassination that ultimately sparked a series of events that subsequently led to the outbreak of the war. As countries swiftly donned the mantle of death and opened their armories; men, women and children suddenly found themselves in the thick of a bitter scuffle for nothing in particular and as more mechanized death machines rolled in, the war took a whole new level. In this snap, a lone British soldier is seen standing on a mountain of shells. The infamous photo taken by Tom Aitken shows the sheer firing power used to force defeat down the throat of adversaries. Imagine how catastrophic these rounds were to the enemy formations. 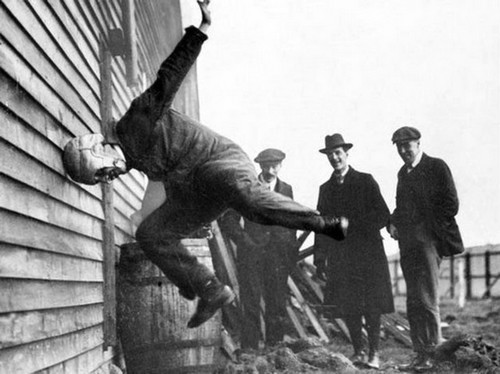 Prior to the age of computer simulators, men had to test things they way they saw fit. In this hilariously-brutal yet justified photo snapped in 1912. An unnamed man is seen ramming head first into a wooden structure to test the strength of the primitive helmets. Prior to the helmets, the late 18th and early 19th Century players protected their ears and head using leather straps lased with cotton. They weren’t strong enough. This test which required agility was extremely dangerous as one had to pick up speed before going ‘’hammer and thongs’’ into nearby structures. Due to the recklessness of the test, injuries to the neck were surprisingly common. 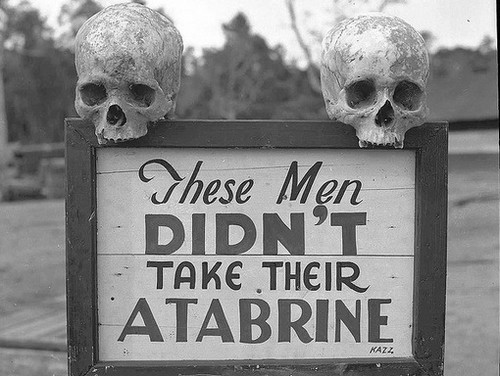 When fear of death and insecurity combine on hysterical masses, few unscrupulous business-minded men are bound to whistle all the way to the bank. In this historical photo of killing two birds with a single stone, two human skulls are used as both fear and marketing technique. From this grim photo that violates the dead, an anti malarial (Atabrine) is advertised in a draconian and carefree fashion. What haunts most is the poster in question was strategically placed in 363rd Station Hospital. I bet it worked. From the poster, a doomster message is all but inscribed with the ‘’ take and live or leave and perish’’ attitude that would most likely send the hysteria buying the drugs en masse (nobody wants to die anyway). Fast forward today, Authorities would come knocking on your door when using the remains of the dead as a strategic marketing tool. Oh, instead of using the skulls, you can try this out. 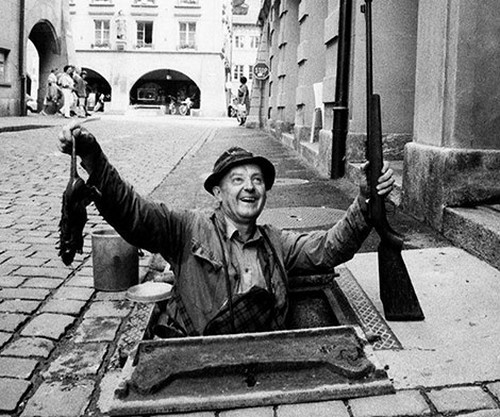 You’ve all heard of rat-catchers. A group of penniless and despised citizens employed to chase and kill rats in a bid to tame their sporadic sprouting across the cities. Still reeling in shock and frenzy of the black and bubonic plague, authorities went to extreme lengths to keep them ‘’death merchants’’ under wraps. These rodent-timers spent hours toiling in the belly of the earth; sewers and cellars as mice shun open areas. Due to their hazardous Modula operandi, they occasionally suffered bites and bruises in the sewers which when came in contact with the frothy fecal waters, the resulting infections meant high fever or certain death. From the photo, a jubilant hunter flaunts his latest catch. 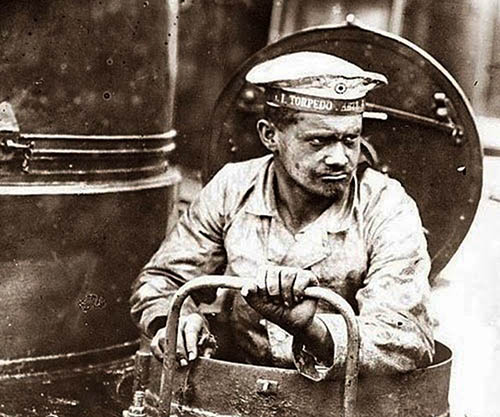 In this photo that sums the rascal natures of combat, a German U-boat crewman is seen totally unpleased with the state of affairs. As a crew of the dreaded U-boat, the patrol took weeks or months. During those ‘’red-set-tape’’ period in the belly of the mechanized death machines, they had to be on guard against enemy submarines as well as spy radars, all while avoiding catastrophic collision with mines in addition to watching the skies for bombers. Any detection would lead to their watery graves, deep in the open and unforgiving seas. Owing to the herculean nature of the job, the crew had little to no time for showers, shaving or changing clothes. Living in extremely cramped conditions didn’t do the matters any better. 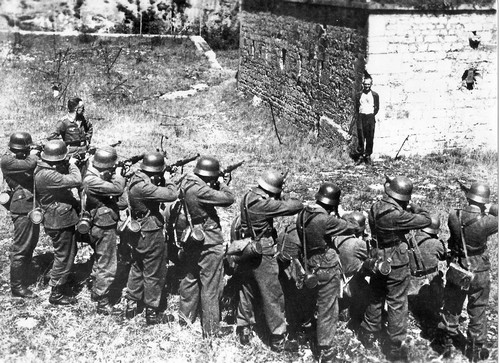 While most of us would freeze at the sight of a gun, George Blind was a different one altogether. Equipped with nerves of steel, George took the bull by the horn by literally smiling on the face of his supposed executioners. After being arrested on suspicion of being a French partisan; accusations that didn’t seat well with the third Reich, he was promptly whisked to interrogation chambers but amazingly failed to crack. Not ones to give up, the ego-full Nazis resort to intimidation tactics that nevertheless backfired as well. Fortunately, the grim exercise turned out to be a mock execution but they did eventually kill him in the concentration camps.

2. NASA Board Of Calculations 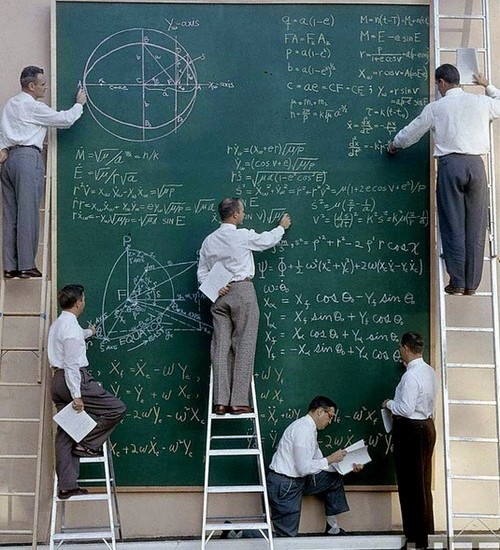 NASA is one of worlds most advanced space program where photos from space voyagers are analyzed by bored scientists before released to the uneducated eyes who marvel at the complexity and immensity of our universe. However, the pre-computer NASA was a different one. Complex spacecraft trajectories, navigation and orbits of spacecrafts were often calculated on the board and this notable photo snapped in their offices attest to that. These tedious job, to top up with constant risk of fall required accurate calculation to avoid messing the whole thing up. Thankful, they were only posing for the camera. The board was their reference point. 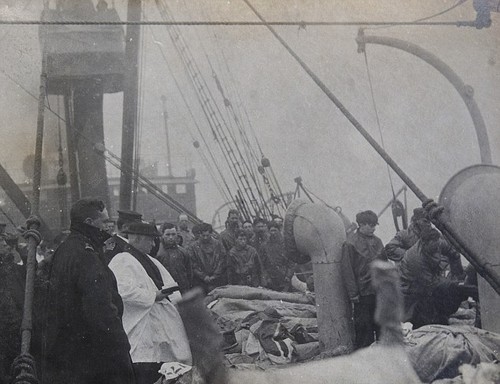 We all know Titanic was one of the most luxurious ship made in the early 1900’s. Needless to say, the operators swiftly criss-crossed the ship and right away branded her ‘’unsinkable’’. To the masses, she was a dream come true. However, we know nothing goes according to plan when you poke your proverbial middle finger in the face of doom and nature taught us the hard way. Titanic would later strike an ice-burg and send 1500 passengers to the icy watery graves. In this historical snap of its time, a catholic priest is seen holding a mass for the damned aboard Mackay Bennett in 1912 before being buried at sea.