For the Hollywood divas, the red carpet is where they show off their beauty and style. Every media house has a camera set upon the ladies, scanning them from top to bottom. From hairstyle to shoe brand: nothing goes unnoticed. Each star spends quite a fortune for her one-of-a-kind dress, shoe, hairstyle, and of course, jewellery. The jewellery that the Hollywood ladies place upon them are well chosen to be not just beautiful but also handsomely priced, because, let’s face it: when it comes to red carpet, price tag matters. Here is a list of 10 Celebrities Wearing the Most Expensive Jewellery on the Red Carpet. Let’s take a look at 10 Most Expensive Red Carpet Jewelries Ever Worn. 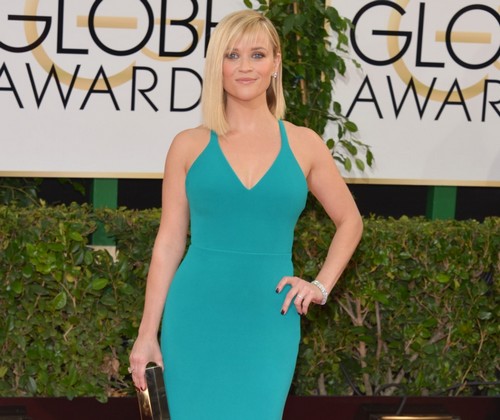 Reese Witherspoon opted for a sleek, turquoise dress in the 2014 Golden Globes, which was rather simple. But, the bling factor of her look was the jewellery she wore. She had three stacked diamond bracelets, an emerald-cut 10-carat diamond ring, and a pair of 4-carat diamond earrings on, together valued at $3.7 million. These were the works of Harry Winston, the revolutionary jeweller based in New York since 1932, and was actually the first jeweller whose designs were seen on the red carpet. 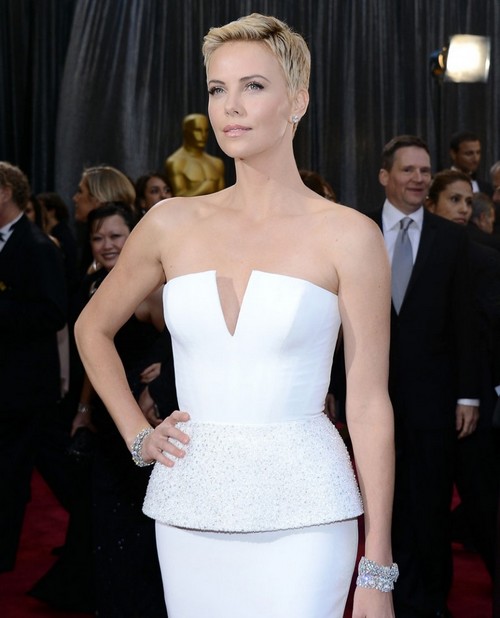 Charlize Theron has been noted to give credits to her styling team for the incredible, almost regal, look, as she dazzled the 2013 Oscars in a white Dior Haute Couture peplum dress, and a fabulous pixie cut. To match the look, she threw in diamond earrings, a diamond finger ring, and three diamond bracelets, in platinum setting. Together valued $4.5 million, these jewellery pieces were also designed by Harry Winston. No wonder, one of the finest red carpet jewellery came from him. 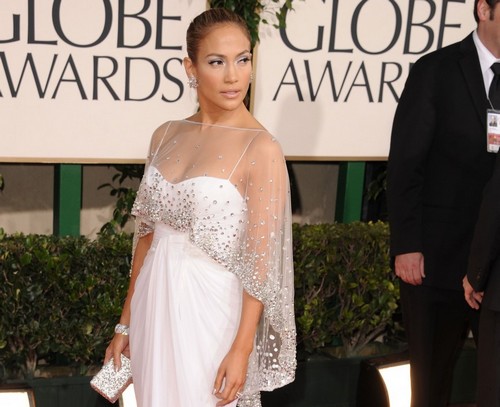 At the 2011 Golden Globe, Jennifer Lopez stole the thunder with the classic combination of white and diamonds. Her sharp, white dress, and embellished shrug was a Zuhair Murad collection. But, the gorgeousness of the dress was taken over by the diamond galore she wore that night. She had a pair of diamond cluster earrings, a 7-carat diamond rind and a bracelet that dazzled with over 600 diamonds. Together, these were of $5 million. But, like a true diva, Lopez made no big deal out of it. 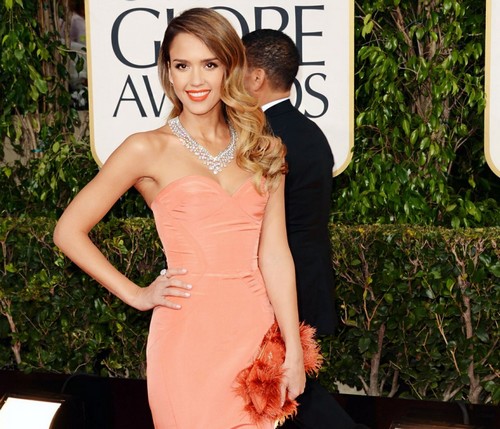 At the 2013 Golden Globes, Jessica Alba was the perfect showstopper, in a peach dress with a plunging neckline that highlighted a Harry Winston necklace. The $5.8 million diamond piece was a loan from Mrs. Winston. She spent another $.2 million on the diamond ring and earrings, both set in platinum. Alba had to bring security guards, just for the necklace. With $6 million worth of jewellery, she is one of the celebrities wearing the most expensive jewellery pieces on the red carpet. 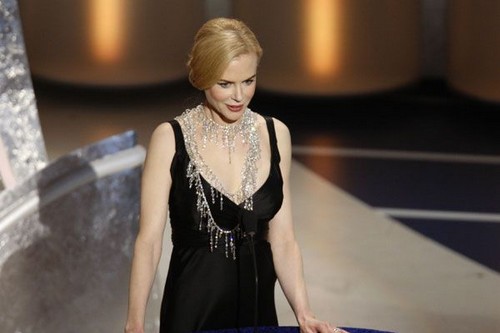 At the 2008 Oscars, Nicole Kidman appeared as a flawless embodiment of beauty, as she wore a simple but glamorous LBD by Balenciaga. But what really made her ensemble stand out was her elaborate necklace by L’Wren Scott. It was studded with over 7,600 diamonds, and took 6,200 long and arduous hours, which sums up to 258 straight days, to complete the piece, custom-made for Kidman. The extravagant piece cost her a whopping $7 million, and it looked the part, as well. 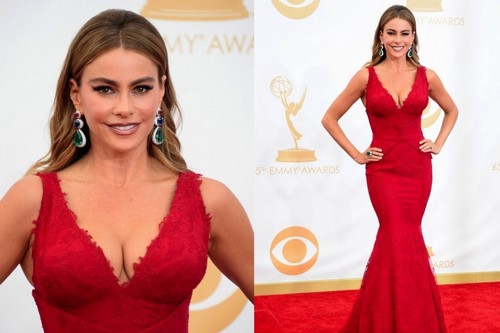 At the 2013 Emmys, Sofia Vergara redefined the phrase, “red hot”, in her red, plunging mermaid gown, which was a Vera Wang design. To complete the look, she put on a pair of dangling earrings studded with ruby, sapphire and emerald gems of enormous size, while her two cocktail rings comprised a 210carat diamond ring and a 40-carat emerald and diamond ring, from Lorraine Schwartz. The jewellery pieces together were priced $7 million, as Vergara tied with Nicole Kidman. 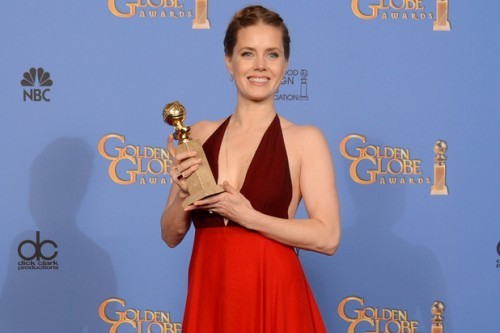 At the 2014 Golden Globes, Amy Adams walked away with the Critic’s Choice Award as the Best Actress for American Hustle, but it was not her only claim to all the spotlight she received. Her deep cut Valentino gown in two different shades of red made her look stunning, along with the $8 million worth of Lorraine Schwartz pieces she showed off. These consisted of 10-carat diamond earrings, a 12-carat diamond ring and a 30-carat diamond pendant, which together cost a massive $8 million. 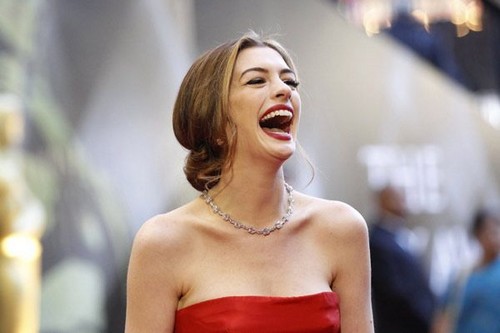 Red gowns are a classic favourite for stars walking the red carpet, especially when teamed with expensive jewellery, as displayed by Anne Hathaway. She teamed her shiny red gown with $10 million worth of sparkling charms. She wore a 94-carat diamond necklace, a 10-carat diamond dangling earrings and a diamond ring, all of which came from Tiffany & Co. However, Anne didn’t pay for these. Tiffany & Co., on the other, hand, paid her $750,000 to wear the set to the event. 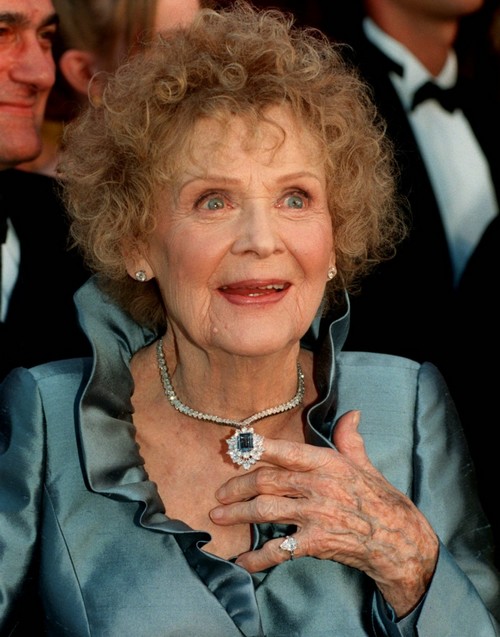 Gloria Stuart was at the 1998 Oscars, nominated as the Best Supporting Actress for her role as the 100 year old Rose in Titanic, dressed in teal silk, and had the honour of wearing the replica of the Heart of the Ocean necklace portrayed in the movie. The neck piece was made by none other than Harry Winton and was valued at a shocking $20 million. The diamond necklace had a centrepiece of a huge sapphire, surrounded by more diamonds. She glorified the piece with her timeless charm. 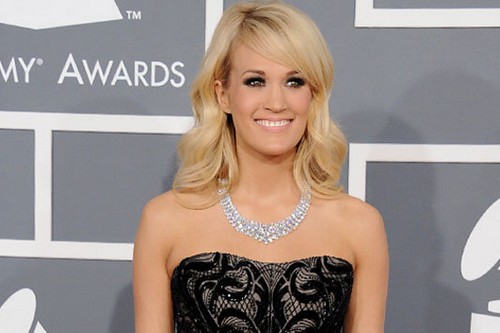 At the 2013 Grammys, won herself a Grammy and the position at the top of the list of 10 Most Expensive Red Carpet Jewelries. She was seen in a black strapless mermaid Roberto Cavalli dress with glittery undertones which went perfectly with the Jonathan Arndt diamond necklace. The piece that showed off her millions of dollars had 381-carats of diamonds, and was priced $31 million. When asked its price, she said, “It’s worth more than me!”

While the most important aspect of the attire of a celebrity on the red carpet is her dress, jewellery is the accessory that completes the ensemble. However much the cost of the dress be, it can never beat the price of the shiny, glittery piece she is wearing, which captures time and attention. It seems that the celebrities wearing the most expensive jewellery pieces on the red carpet made sure that their pieces remain divas and celebrities in their own rights. With 2015’s award shows still to be hosted through the year, we are left to wonder: Who will be the next on Most Expensive Red Carpet Jewelries list?