Nuclear war is not science fiction anymore! Ever since the atomic bombings of Hiroshima and Nagasaki in 1945, nuclear weapons have been more advanced and more deadly than ever before. With the new tensions rising between countries, the bombs can start dropping in any moment and could end up turning our precious earth into a god-forsaken wasteland. Many people will die, but the question is, will you? After following my tips and suggestions for surviving the nuclear wasteland, you too can not only survive, but thrive in this new world that has been handed to us! 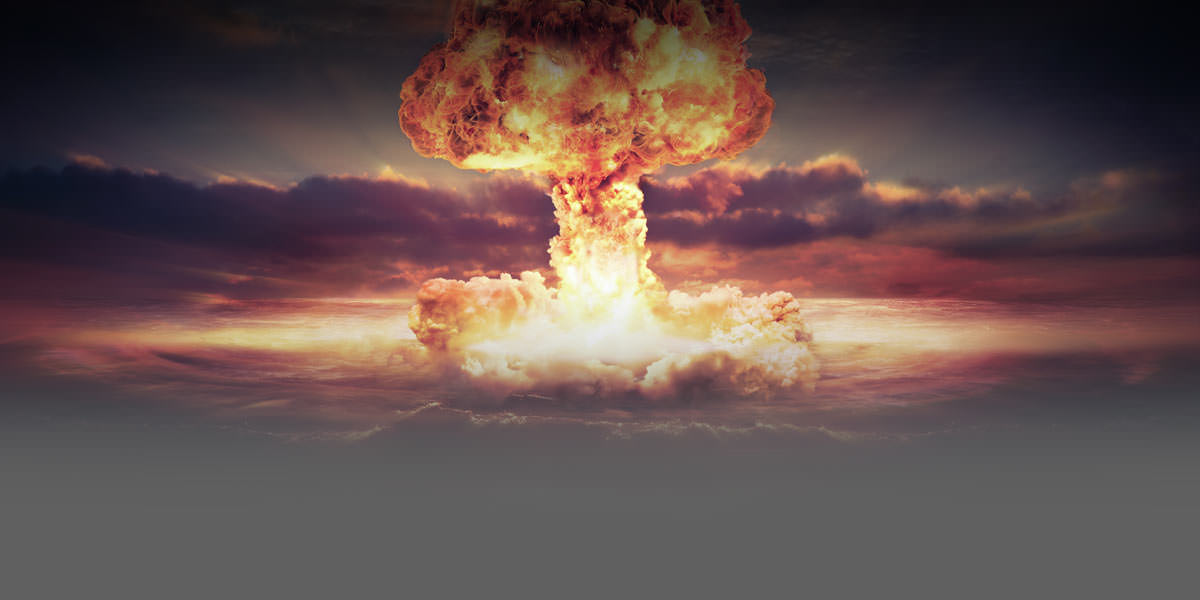 When spotting the big mushroom cloud we all dread, you have only one option; run and hide! You may have heard of the “Rule of Thumb”, which is where you stick your thumb out in front of you and aim it at the cloud. If your thumb is bigger than the cloud, you are in a safe zone, but the cloud is larger, expect your hair to start falling out very, very soon. The rule, however, is not effective and should not be depended on, due to the many factors in a nuclear explosion. Your best option is stabbing your fellow neighbor at the second you see the cloud of doom and take his or her car, drive as far away from the blast as you can, and seek refuge in a basement. Staying in a building above ground can lead to you having radiation sickness, which is not fun.

Congratulations! You have successfully made it to the safety of your shelter, now stay there for 2 weeks. That may seem unreasonable, but to avoid dying of radiation, it’s best to stay away from the surface until the radiation levels outside calm down. The problem with this is that staying underground means that you can’t go up and resupply when you run out of, well, supplies. While you can go 3 weeks without food, you can only go a couple of days without water, so you can forget about your stomach growling, because you’ve got bigger problems now. You may be lucky and have bottles of water in your shelter, but if you don’t you’re only chance is drinking from the water heater in the corner. It’s safe to drink straight up, but if you want to be careful, drop ¼ of a teaspoon of bleach into each gallon water and wait for an hour. After the hour, your water is completely clean.

Now that 2 weeks have past, it’s time for you to now brave the nuclear wasteland! But hold your horses! If you think you’re going to go out there with shorts and a tank-top, you’ve got another thing coming! You’re probably not going to find a hazmat suit out in ruins of society, so what should you do to keep the radiation away? Answer is, you really can’t. What you can do, however, is limit your body’s exposure to your environment. Wear a durable and jeans with thick fabric, also make sure to grab a pair of hiking boots. Not only will these clothes cover most of your skin and not tear easily, you’ll look fashionable while running away from dangerous raiders! Speaking of raiders…

When in the wasteland, you shouldn’t worry about Super Mutants or Death-claws, you should worry about other humans. That maybe a sigh of relief for some of you, but you shouldn’t underestimate a desperate man that wants your stuff, and that is willing to kill you for it. So what do you do? Give them what they want and run away. You may have survived a nuclear explosion, but you’re still human. In a world without doctors, you shouldn’t risk yourself getting hurt over a can of tomato paste. When in violent situations, always try to go with a peaceful option. However, sometimes you can’t run away or reason with a psychopath, what do you do then?

If you can’t afford to lose that can of tomato paste, don’t be afraid to fight back. Peace doesn’t always work and if you want to survive in this new world, you must be able to fight when needed. You may think that blasting the raider away with a gun if your best option, I’m here to tell that you’re wrong. Guns may seem to be extremely effective in movies, but in real-life, you need rigorous training to be able to use the gun properly. They require ammo, can jam, and can also attract more raiders towards your location when firing it. The best self-defense weapon you can get is a knife. They are silent, don’t need much training or ammo, and are more discrete. Though a knife is useful, if you happen to spot a gun, grab it. You may not be able to shoot it very well, but if you aim it at someone who’s trying to take what you have, you’re most likely going to scare them off.

Now that those raiders are off your back, it’s time to start scavenging for food and water. Make sure you bring a large book-bag when going out to resupply, for obvious reasons. If you want to find these supplies, your best option to find this is a grocery store and stock up there. However, these grocery stores can often be occupied by other people, who may be friendly or not. If they are friendly, try to convince them to offer you some supplies. If they decline, try getting on your knees and begging. If you start crying, they’re sure to throw some supplies your way to get you to leave. If you find a store full of raiders, however, it’s best to just walk away and avoid conflict. If you manage to find a store, stock up on canned good and bottles of water. While you may want some cold cuts at the nearby butcher, don’t bother. It has been at least 2 weeks since the explosion, so most perishable foods at this point are gone. Canned goods are the ultimate survival food, due to their long expiration dates.

While it may not come to mind, it’s a good idea to stock up on medical supplies as well. You never know when you might hurt yourself or get sick with a disease. Raid a nearby pharmacy for these supplies, and if you’re worried about having to deal with people who’ve already taken the place for themselves, don’t. Most people wouldn’t think to try to raid pharmacies, so for the most part, you’re good to go! While you should probably grab a lot of pain killers and aspirin for the road ahead, a first aid kit and antibiotics are a must have. You can disinfect and close up wounds with the first aid kit and use the antibiotics to fight off infections and cure common illnesses. You should also grab a bottle of Potassium Iodine pills. These pills will keep your thyroid from absorbing the radiation around you, preventing you from getting thyroid cancer in the future.

After returning to your shelter from your long journey in the wasteland, it’s an absolute must to shower before entering so you don’t spread radiation into the only place you’re safe it. Clean your entire body thoroughly with soap and water to completely rid yourself of the radiation. If you have a wound that is wrapped up or bandaged, do not remove it. If you do, you’ll allow radiation to enter the wound. Make sure to also take those clothes you’ve worn on the surface and lock them inside a sealed bag, ensuring that they don’t spread radiation into your shelter. After that, put on some nice, clean clothes and rest up; it’s been a long day. If you don’t have clean clothes, you can shake and brush the clothes you’ve worn outside in the surface and wear those instead.

Before you start stuffing your face with those cans of ravioli, don’t! If you want to survive in the wasteland for as long as you can, you must get your body in shape. Avoid overeating; this will cause you build up fat and end up slowing you down. Do daily cardio exercises to burn the fat you already have, as well as build up your speed and endurance when running. Train your muscles 3 to 5 days a week to build up strength for carrying supplies. The most simplest way to train to to use weights, since it’s simple to track your progress and doesn’t need complicated movements. If you don’t have weights at your disposal, you could try a body weight training plan, which requires very little to no equipment.

Whether you like it or not, the world’s changed. Most people on earth are now ash, and since you are one of the lucky survivors, it’s up to you to rebuild. Yes, you can easily survive on your own, but is that really how you would like humanity to act in this new world? No, you don’t. That’s why you need to set an example for the people around you, and the people who are unfortunate enough to be born in this hellhole. How do you do that, you might ask? Help your neighbors when they need it. Not only will they most likely help you in the future, they also might help others.