Nowadays, when most of us think of the word God, what springs to mind is a sensible humane God or spirit worshiped by the devotees of one of the major religions. However, if you delve a little deeper into anthropology or history, you are bound to find a great number of highly unusual gods that are still worshiped or have been worshiped in the past. Below is a list of ten such curious, crazy gods and deities. 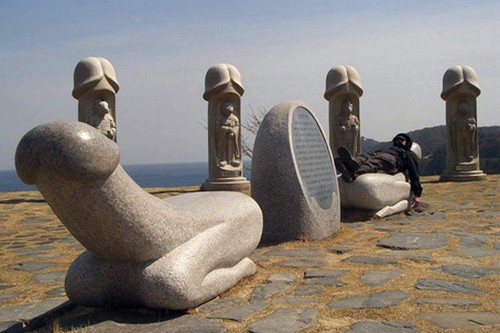 Mutunus Tutunus was a Roman fertility deity symbolised as a giant penis. It is believed that the deity had a sanctuary in ancient Rome which was visited by veiled women. Mutunus Tutunus played a significant part in every marriage ceremony.

It is said that previous to marriage rites brides straddled the phallus god as a way of making the first offering of their virginity. This also apparently prepared the brides for intercourse and taught them not to be embarrassed by sex.

A model of the god’s phallus was kept in most Roman bedrooms. The poor usually had only a stone or clay representation of the phallus whereas the middle class and the rich could afford finer representations made from marble or bronze. 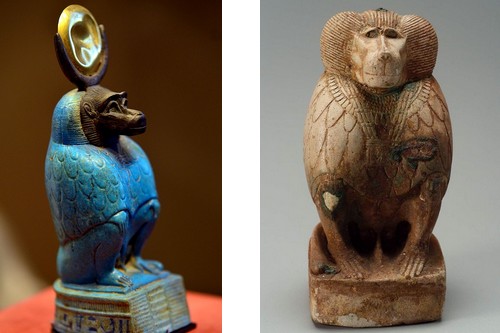 Babi was a fierce, blood-thirsty baboon god worshiped in Ancient Egypt. As early as the Old Kingdom Babi represented supernatural aggression to which the monarch aspired.

Babi had full control of the darkness and had the power to open up the sky for monarchs because his phallus was the bolt on the doors of heaven. Also, the ferryboat of the underworld used Babi’s phallus as its mast.

The terrifying god was said to live on human entrails and thus protection spells were necessary to protect oneself against him, especially during the weighing of the heart ceremony in the Hall of the Two Truths where a person’s suitability for Paradise was determined. 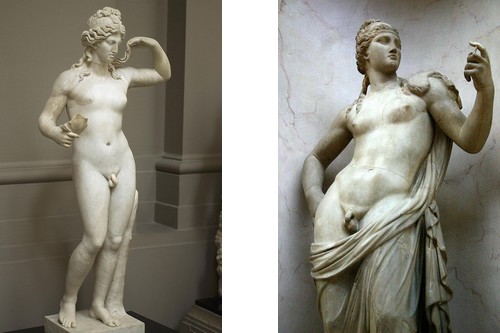 Aphroditus (or Aphroditos) was a god worshiped in Greece. He was worshiped as both male and female and was portrayed as having a female form and Aphrodite’s clothing but also the beard and sexual organs of a man.

To celebrate Aphroditus men and women routinely exchanged clothing and assumed alternate sexual roles. It is also believed that during these rituals women assumed a penetrative role while men celebrated the “passive” sexual experience. 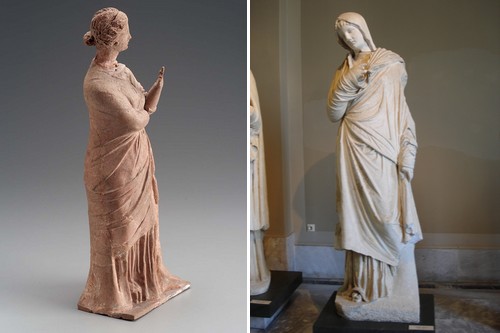 In fact, women who were content with one marriage were honoured with the crown of Pudicitia as it was believed that the mind of a woman was uncorrupted and loyal only when she “did not know how to leave the bed on which her virginity had been laid down.”

The value of Pudicitia, as well as the worship of the goddess Pudicitia declined after the founding of the Roman Empire. 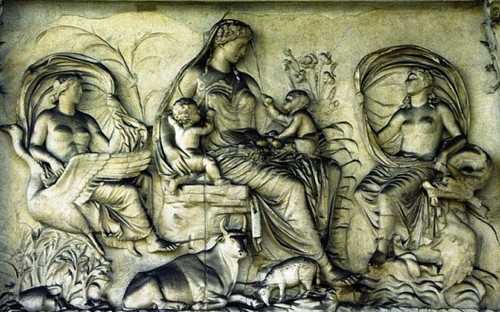 The Bona Dea, or the “Good Goddess”, was a Roman goddess of women and healing who was worshipped exclusively by women. Her true name is said to be Fauna, which means “She Who Wishes Well.” However, Fauna was believed to be her secret name, not to be spoken aloud, especially by men.

The Bona Dea was an earth goddess who protected women, and who watched over virgins and matrons especially. She was also believed to have oracular powers which she revealed only to women.

The Bona Dea had a secret festival celebrated only by women during which neither wine nor myrtle were to be mentioned by name. According to one legend this was because one night Bona Dea’s husband Faunus, the god of the wild, came home to find that she had drunk an entire jar of wine. Enraged, he beat her to death with a myrtle scourge. Thus, during the secret festival myrtle was forbidden and wine had to be referred to as “milk.” 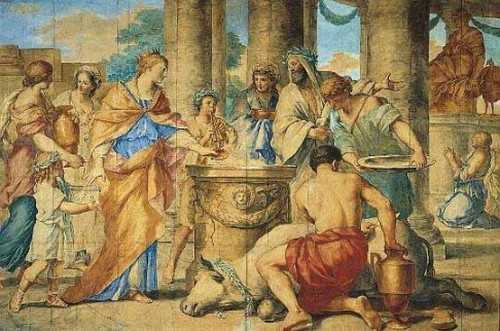 Juno Viriplaca also known as “Man-Placater” or “The Goddess who Soothes the Anger of Man”, was a Roman goddess who restored peace between a married couple.

Often, the husband and wife would visit the sanctuary together. While there, each would speak their mind until their argument was settled at which point they would return home in harmony. 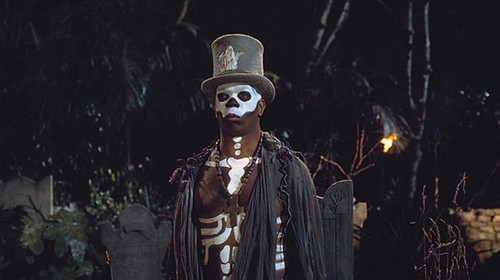 Baron Samedi is a Haitian Vodou deity. He is often depicted with a skull-like face, wearing a black top hat, a long black coat and glasses or sunglasses. He also carries with him a cane that is adorned with an erect phallus.

Baron Samedi is said to preside over cemeteries and crossroads as well as the spirits of the dead. He possesses his followers at parties and rituals and makes the possessed individuals dance lewdly, make crude comments in a high-pitched nasal voice, mime sexual intercourse, eat gluttonously, drink heavily and smoke.

However, despite his vulgar behaviour, Baron Samedi is taken very seriously as he can give his devotees helpful advice on a wide range of problems, from romantic difficulties to employment issues. He can tell his followers when they are under the influence of witchcraft and he can also wreak revenge on his follower’s enemies. Baron Samedi is a deity often invoked in witchcraft and black magic.

It is said that Ungud, with the help of the Milky Way, made the world and created natural species by dreaming itself into their various shapes. Ungud also created clones of itself, known as “wonjina”, and placed them in various places but particularly in waterholes.

It is believed that these clones generated human spirits which then entered women and became babies. Thus, Ungud is seen as an archetype of life itself as opposed to a Father-God or a Mother-God. 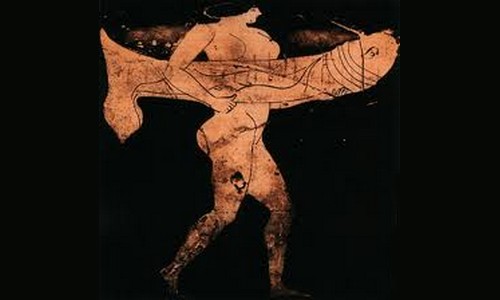 Liber was a Roman god of male fertility, viniculture and freedom. A public festival of Liberalia was celebrated on the 17th of March in his honour. The festival was celebrated with sacrifices, processions, and bawdy songs.

It is said that the god Liber was especially celebrated with the worship of the male organ. During the festival, statues of phalluses were set up on little carts and, with great honour, were first displayed at rural crossroads and then brought into the city.

In the town of Lavinium, a whole month was dedicated to god Liber. During that month everyone used the most indecent language until the phallus was carried through the forum and brought to rest in its own dedicated spot. It was a tradition to have the most respectful matron to place a crown on top of the phallus.

Furthermore, to make sure that god Liber was appeased and evil spirits were ward of the fields, the matron was “forced to do in public what not even a prostitute would have been allowed to do in the theatre”. 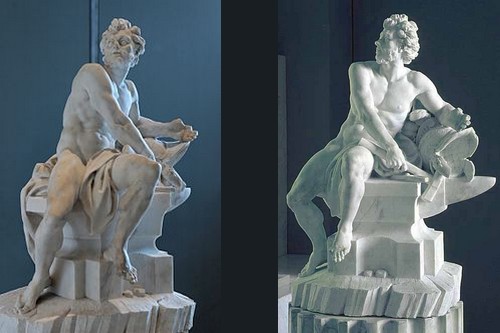 Hephaestus was the Greek god of blacksmiths, sculptors, metallurgy, fire and volcanoes. He is most commonly symbolised with a hammer, an anvil and a pair of tongs.

Hephaestus was a talented craftsman and was well known for the wonderful weapons he made. He also made wheelchairs that moved on their own, and golden servants that helped him move about. As well as that, he created Pandora, a clay statue to whom Athena gave life, thus creating the first woman.

While Hephaestus was a great craftsman (he even built remarkable palaces for the gods atop Mount Olympus), his love life was not very successful (his wife had an affair with the god of war.)