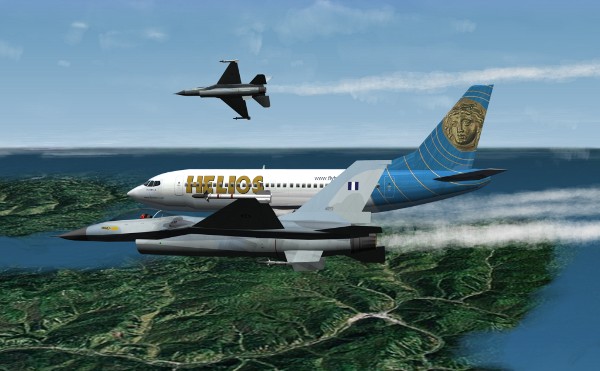 With the recent disappearances of the Malaysian flight MH370 and EgyptAir flight MS804, I’m sure you, as I, have started to wonder what makes these aircrafts vanish into thin air. With a little time and research, I’ve found that there are several other aviation mysteries that are as strange and mysterious as the next. This has led me to create a list of ten and cover some of the bizarre moments of aviation history. Some of them are more unsettling than we’d like it to be.

On January 30th 1979, a Boeing 707-323C went missing over the Pacific Ocean about 30 minutes after take-off from Tokyo. The aircraft was operating on a flight from Tokyo to Rio de Janeiro – Galeão international airport and was transporting a six person crew with 1.4 million USD worth of paintings. No traces of the aircraft, crew or the paintings have been found to this day.

Human error is believed to be the cause that initiated the crash of Helios Airways flight 522. The plane flew on cruise control for two hours before it went plunging down and crashed in Greece. A Greek fighter jet was scrambled around half an hour before the flight started descending, but it was all too late by then. The loss of oxygen and cabin pressure in the aircraft caused the 121 passengers on board to lose consciousness. It is known as the haunted aircraft.

A Flying Tiger Line Lockheed L-1049 Super Constellation carrying 93 US soldiers and 3 South Vietnamese from Travis Air Force Base, disappeared on March 16, 1962 and was never to be seen again. Eighty minutes after the aircraft had taken to air, the pilot radioed a routine transmission report. Another one was due an hour later, but the transmission never came. Eye witnesses have reported seeing an explosion. However, no debris was found, even after an eight day search of 200,000 square miles. It prompted one of the largest air and sea searches in the history of the Pacific.

A B-47 heavy bomber was one of the four scheduled flights for deployment to an overseas airbase. The aircraft carrying two nuclear capsules disappeared over the Mediterranean Sea in 1956. An extensive search was carried out, but their efforts were in vain. Even to this day, the plane, the crew nor the two nuclear capsules have been recovered.

A Boeing 727-223 entered a runway without clearance and took off southwest with its lights turned off. It headed over the Atlantic Ocean. A mechanic and a flight engineer were on-board making repairs at the time the aircraft departed. The aircraft and the men were never seen again. Theories suggest that someone was waiting inside the plane, while others suggest that something had happened to make one of the men take the desperate chance.

TWA’s 800, a Boeing 747 was taking off from JFK airport on its way to Paris. Just as it received clearance to climb altitude, without any warning, the aircraft exploded. Thousands of pounds of kerosene, along with 230 people on-board were ignited in mid-air. The strangest part was the lack of evidence of a criminal act found. Who shot the aircraft down? It remains a mystery.

In 1947, a British airliner vanished with 11 people on board with no trace. To make matters stranger, a final transmission was sent from the aircraft before it went off radar. It was a mysterious Morse code message which was concluded with the phrase “STENDEC”. Although wreckage of the aircraft was found 50 years later, the message has yet to be solved.

The disappearance of Amelia Earhart is one of the most well known aviation mysteries to this day. She was one of America’s favourite pilots, and was praised all around the world. The Lockheed Electra disappeared over the Pacific Ocean in 1937 with Amelia and her navigator Noonan on board. Following the news of her disappearance, the U.S Navy and Coast guard launched one of the largest air and sea search in US history. However, their efforts failed and came back empty handed with no leads as to where the aircraft had gone. (history.com)

In 1971, a man known only as “DB Cooper” managed to hijack a Boeing and leap out of it with a staggering $200,000 of bank notes with a parachute on his back. No traces have been found, but FBI investigators have claimed that “Cooper” could not have survived the jump. Certain theories suggest that the man was a grocery store manager before the hijacking.

1. Disappearance of the Panair Do Brasil

One of the greatest aviation mysteries was the disappearance of the Panair Do Brasil in 1946. Sounds pretty basic, doesn’t it? We haven’t got to the strangest part yet. The very same aircraft landed on the airport of Bogoto in Colombia 47 years later with human skeletons, warm cup of coffee and a dated newspaper. What happened to the aircraft back in 1946? Who was behind all this?