Most animals find a home for themselves by taking shelter in caves, trees, underground, or hollows. Some opt for parasitic arrangements. But, we also know of certain animals like the birds, ants, bees etc. that make for themselves private places like nests, hives or colonies to rest, mate and nurture offspring. There are also some animals that build themselves elaborate living places, and are, in fact, some of the best architects. So let are look at some of the best animal architects and their constructions. 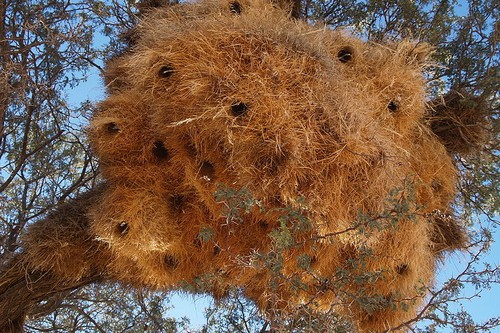 This bird is found in South Africa, as well as Namibia and Botswana. They build permanent communal nests on tall trees or other erect objects like telephone poles with sticks and grass. The nests are the largest built by any bird, and are capable of housing several generations each of as many as a hundred pairs of birds. There are many separate rooms. The central chambers can retain heat and are for night-time roosting, while the outer ones are for daytime shade, as the temperature maintained can be about 7-8°C, when it is about 16-33°C outside. These sky-condominiums look like haystacks, with spiky straws for security system at the entrances which are at the bottom. 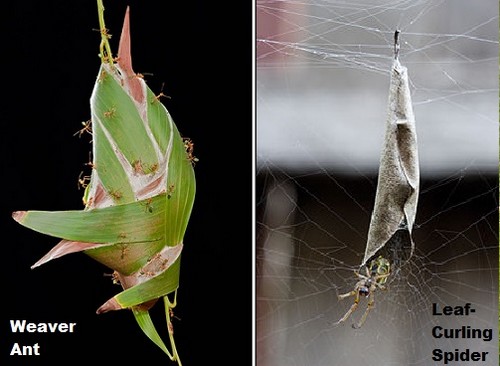 Generally, ants are known to build colonies inside anthills, and one of the most remarkable anthills is made by the European red wood ants who build interlinked mounds to switch between. But, the weaver ant of Central Africa and South-East Asia has gained ecological success by building capacious nests from living leaves which are held together by their larval silk. They put together concerted efforts as they build large colonies. The nests are impermeable to water. Something similar is done by the leaf-curling spider of Australia, except it uses a dead leaf, and curls it to form a cosy shelter hung in the centre of the web. They in in pairs at an early age here, and later use it as a nursery. 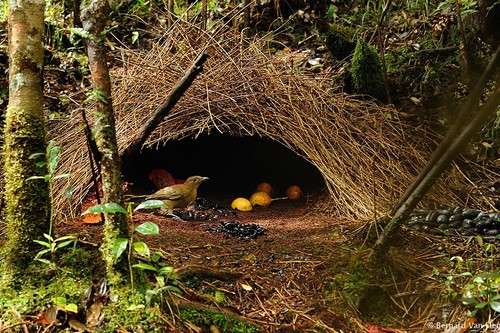 The bowerbird lives in Vogelkop Peninsula of Indonesia. Using grass and sticks, the male bowerbirds build bowers on the ground, which look like small pygmy huts. These bowers are their way to attract female mates. Building the bowers is not all: they also design the interiors by artistically arranging berries, flowers, beetles and other eye-catching ornamental objects, as each bird makes the best effort to outdo his neighbour. The female birds visit the nests, and if they like what they see, they mate with the host. The female birds probably do so to just check the capability and sense of responsibility of the male, since these bowers play no par in nesting and raising of the young. 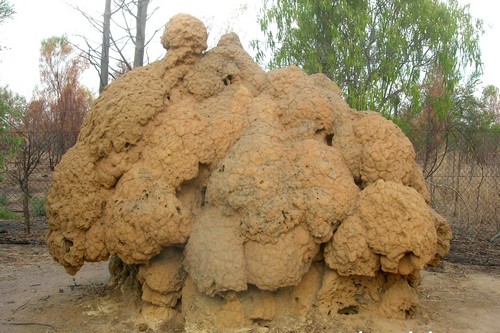 The termites that live in our houses are the lazy little pests, but, out in the wilderness of Australia’s Northwest Territory live the self-sufficient Cathedral termites. Using mud, chewed wood, their own saliva and feces, they build self-sustaining mounds towering up to 30 feet, which are centrally air-conditioned, enhanced by the north-to-south construction and tunnels that run throughout the mound for temperature and air regulation. Water also collects as condensation. Beneath the sprawling megacity of skyscrapers, the underground colony spreads over acres, and is complete with fungi gardens where plant matter is cultivated. There are even small motel-rooms, for mating. 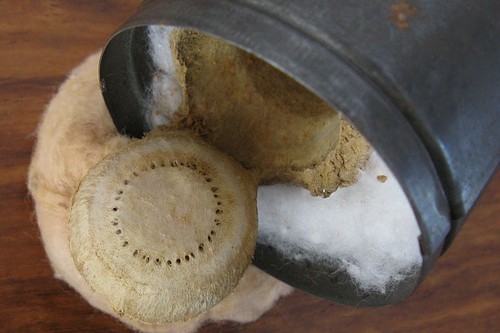 Spiders are known for making their webs, and some of them definitely go an extra mile, like the leaf-curling spider, or the isolated cases in the humid areas of Texas or Canada where spider communities build webs together over many hectares of land. But the trapdoor spiders are different. They live underground, in burrows that they dig out. Using soil, vegetation and silk, they construct doors for their houses. These doors can open and close at hinges which they make out of spider silk. Thus, the door is completely hidden when sealed, making it the perfect trapdoor. They make a complex system tripwires with their webbing, to attack and trap unsuspecting victims. 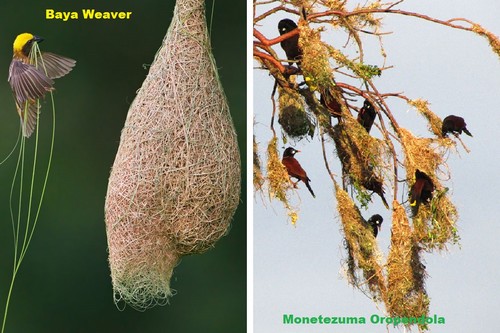 The baya weaverbird is found in the Indian subcontinent and Southeast Asia. It is well-known for its elegant retort-shaped hanging nest, built from leaves in colonies. But isolated nests are not unusual. Far away in the Caribbean coastal lowlands, the Montezuma Oropendola, a New World tropical icterid bird, builds a similar kind of nest out of grass and small vines, hanging from trees in colonies of about 30 birds. They build their nest in high trees in the forest canopy, edges or plantations, unlike the baya weaverbirds whose nests are built on thorny trees, near or over water. 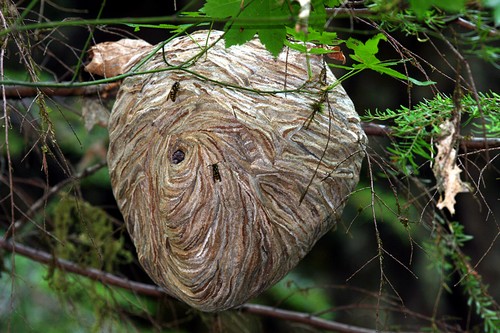 While most wasps do not build nests or opt for parasitic arrangements, the paper wasps build elegant nests. The different species use materials like fibers of chewed plants, dead wood or stems, to build their nests with. The materials are bound together with resin and their own saliva or silk. Some species also use mud. The nests have open combs with cells, like in the beehives. The internal honeycomb tiers have a paper wrapping that surrounds them. The nests also have a petiole or constricted stalk, to anchor the nest. The wasps spread a chemical that they secrete around the base of the anchor to repel ants and prevent loss of eggs. The nests are usually built in sheltered areas. 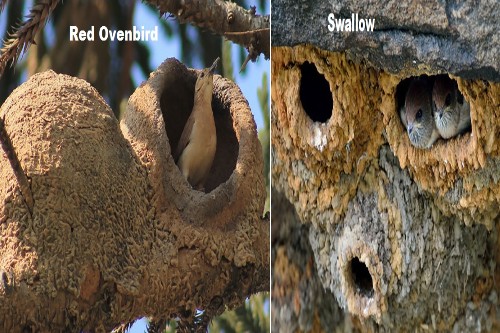 The Rufous hornero or red ovenbird uses mud or dung as the main material to build earthen bowls, constructed on top of high tree limbs, poles, posts, etc., where these get baked by the sun, creating a hardened shelter where the birds lay eggs. The nests face away from prevailing winds. Thus, these are perfect for the incubation of eggs, and are a home for the nestlings and their parents in all kinds of weather. Many species of swallows, too, build mud nests. Swallow nests can also be made out of the birds’ saliva. These nests, built in colonies, are considered delicacy by some people. The evolution of nest construction is thought to be associated with the clutch size of a swallow species. 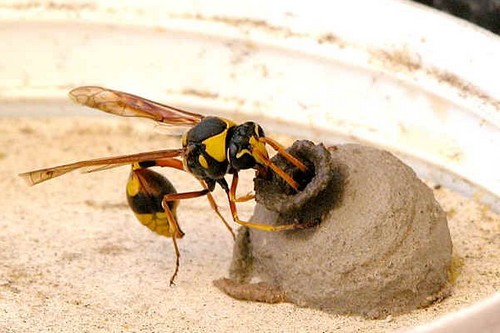 Mud daubers build themselves elegant nests out of mud, and sometimes, their own vomit. The organ pipe mud dauber’s nest is in the shape of a cylindrical tube, like an organ pipe or pan flute, and these are built on the horizontal or vertical faces of bridges, walls, cliffs, shelter cliffs, or other such structures, while the black and yellow mud dauber nest may be simple, one-celled and urn-shaped, which are then clumped together and plastered with mud. The mud dauber’s den contains many cells, not just to house the eggs but also to serve as asylums to keep the prisoners, i.e. spiders, in a paralyzed state so that they cannot escape, and can be devoured by the wasps and their larvae. 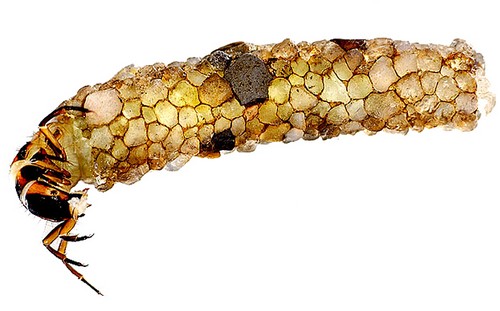 The Caddisfly is an underwater architect of its own kind. In the larva state, the immature caddisflies toil hard in streams, ponds and other fresh-water bodies they inhabit, and cover themselves in bits of sand, plants or anything they find, to build an array of cases and retreats. It secretes a sticky silk from its modified salivary glands, which it uses to spin together pebbles, sands, and other detritus. The larva grows in the ornate, unique make-shift home, in a protected environment that offers camouflage and stability in currents, and also ensures efficiency in feeding and respiration. Some build net-like chambers in front of the retreat, spread silken mazes, etc. to catch food.

There a few other animals that deserve to be mentioned for their architectural skills. Beavers, for instance, are excellent woodworkers and weather-proofers, and build massive dams to create still ponds and flood woodland areas to a desired depth, and the dams are complete with submerged entrances to the internal winter lodges, kept warm and safe with coats of mud. The ants, too, are some of the best animal architects, capable of building elaborate ant colonies underground, without a blueprint or any light, and display amazing skill in gauging depth from the surface. Gophers and prairie dogs build burrows that are actually called towns, since they spread across hundreds of acres, housing thousands of rodents. Honeybees have their entire lives revolving around their beehives made of wax, where there are perfectly hexagonal cells that together form the combs to store honey and breed the young. The trapdoor spider, which lives underground, manages to build a door for its house which opens and closes at the hinge made of spider silk, and they also have a complex system of tripwires to pounce upon unsuspecting preys. There are many such masterminds at work all the time in the nature, and though we humans might have mastered the art of architecture with science, it is safe to say that the animals learnt to hang out in safe and cosy housing estates and farmed their own resources in the colonies, thus making great contribution to the environment and ecology in the process, when the humans were still in the first stages of figuring it all out for themselves.