Horror movies play on the viewers’ fears and nightmares. They are designed to scare you and leave you sleeping with an eye open. They captivate you from the start to the finish. Most of the time, you will realize that these movies are not true, making you breathe a sigh of relief. But what happens when you find out that these movies were based on true stories? Here are 10 frightening true stories behind horror movies. 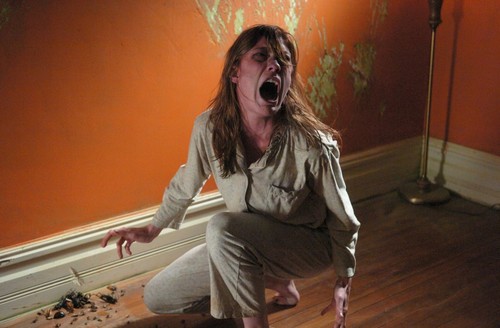 The Exorcism of Emily Rose is a horror movie that was produced in 2005 starring Laura Linney and Tom Wilkinson. The horror movie is based on the story of Anneliese Michel , a German woman born on the 21st of September 1952.

Anneliese Michel began to experience convulsions when she was just 17 years old. She was diagnosed with temporal lobe epilepsy and soon enough, she suffering from depression and considered suicide. It was also believed that she heard devilish voices, damning her while she was praying. The treatment at the psychiatric hospital did not help her hallucination. Being the religious person she was, she attributed it to demonic possession.

An older woman, who accompanied Anneliese, noticed that she would avoid walking by images of Jesus. She also avoided drinking Holy Water. Her family asked a priest for an exorcism, but he declined their request, informing them that an exorcism required the bishop’s permission.

Annaliese’s case worsened from aggression and self injury. She would lick her own urine and eat flies. 67 exorcism sessions were performed on her, each lasting up to four hours, over the course of ten months.

On July 1st 1976, Michel died in her home. The autopsy showed that she had suffered from severe dehydration and malnourishment, as well as Pneumonia and fever. Prior to her death, she refused to eat, believing that it would get rid of Satan’s influence on her. She weighed 68 pounds at the time of her death, and suffered from broken knees. Her last words were, “Mother, I’m afraid.” 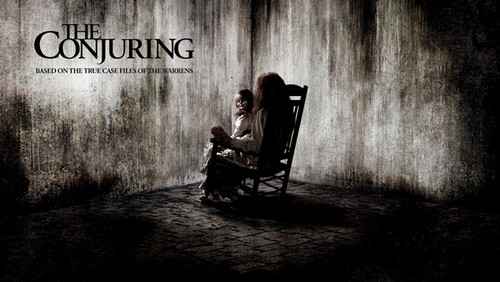 The conjuring is an American supernatural horror movie produced in 2013. It is based of the story of Roger Perron and his wife Carolyn, who moved into their Rhode Island home in 1970. They had five daughters; Andrea, Nancy, Christine, Cynthia and April.

On the first day on living in their new home, they experienced bizarre occurrences such as furniture moving or whispers throughout the house. The ghosts were harmless to them, except for one, Bathsheba Thayer.

Thayer was born in Rhode Island in 1812. On March 10th 1844, she married Judson Sherman. They both had a son, Herbert L.Sherman, who was born when Bathsheba was 37 years old. It was believed that she had three other children, none of whom did not survive and died at a young age. Suspicion grew when one of her babies died. When the baby was examined, the cause of death was due to a large needle that had been impaled at the base of the baby’s skull. The people in her town believed that she was sacrificing her children to the devil. Bathsheba died of old age on May 25, 1885.

The Perron’s were convinced that the spirit of Bathsheba was haunting their house. They had encountered her a few times. Her attention was mainly on Carolyn, the wife. She also had a thing for Roger, touching him inappropriately when he was alone. The Perron’s asked for help from Ed and Lorraine Warren, who were paranormal investigators.

In 1980, The Perron’s finally sold their home and moved away. Their daughter, Andrea, wrote a book about their experience. To this day, the house still stands. 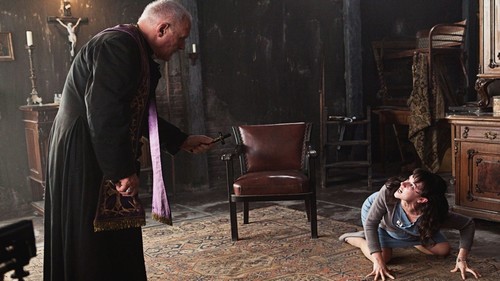 The Rite is a 2011 horror thriller movie based off Baglio’s book The Rite: The Making of a Modern Exorcist. Father Gary Thomas, who is portrayed by actor Colin O’Donoghue in the movie, attended exorcism classes after he arrived in Rome in 2005.

Father Thomas recalls the case of a married woman named ‘Lisa’. She was in her 20s and was brought to Father Thomas’s office by her family members. They claimed that she was suffering from unexplainable violent outbursts. Thomas felt a presence in the room when she arrived, and when he began to pray, her face started to become distorted. Lisa then spoke in a unrecognizable language. She had a serpentine look in her eyes, which he recognized as demonic possession. She screamed when he laid his crucifix on her. 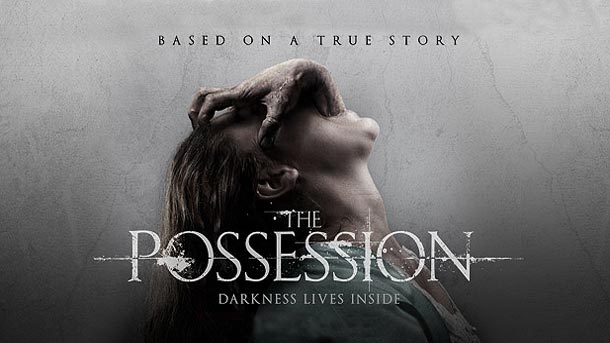 The Possession was another movie inspired by real life events. The movie, released in 2012, is based on the haunted dybbuk box.

The original story starts with the listing of an old wine box on eBay for $1.00. It ended up selling for 300$ by a buyer called Kevin Mannis. The box belonged to a Holocaust survivor who was the only person in her family to survive.

Mannis decided to give the box as a gift for his mother for her birthday. After receiving the box, she had a stroke and lost the ability to speak. Kevin Mannis tried gifting the box to any of his friends or family, but they all ended up giving it back to him. They claimed that they noticed the smell of cat urine and Jasmine while owning the box.

All people who were gifted the box, including Kevin himself suffered from the same nightmare where their friends would turn into a demon and beat them to a pulp.

Currently, the box is in the hands of a university museum curator. 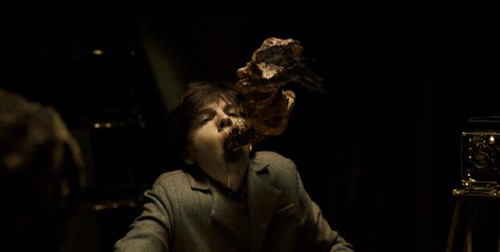 The haunting in Connecticut follows the story of the Snedeker family. Novelist Ray Garton shed light on their story in his 1992 book “In a Dark Place: The Story of a True Haunting”.

Their eldest son, Philip Snedeker, had cancer of the immune system. The family had to move to a house near the hospital for their son’s treatment. They soon discovered that the house was a former funeral home, and Philip started seeing ghosts and visions. Soon enough, the whole family began to experience bizarre events. According to the mother, she claimed that as she was cleaning, the mop water turned a deep red color. Also, Philip recalled that the dishes put themselves away, making him think he was crazy.

The Snedekers have told their story many times on national talk shows and on Discovery channel TV show. In 2012, cancer claimed Philip’s life. He had four children and worked as a trucker. 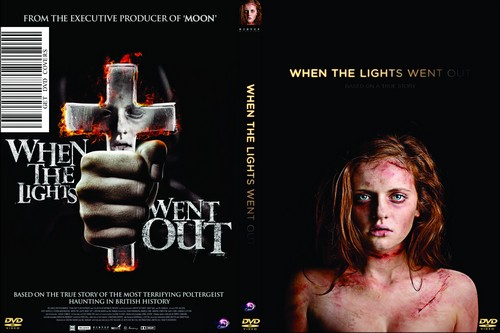 When the lights went out is a 2012 horror film. The movie’s story is loosely based on a poltergeist haunting known as the Black Monk of Pontefract. Pat Holden, the director of the movie, used to hear his mother’s stories about her encounters with the poltergeist.

Rene Holden, Pat’s mother, was known among her friends for her psychic abilities. She was interested in anything supernatural. When her sister in law told her about the supernatural occurring in Pontefract council house, she was determined to see the paranormal activities.

Pat Holden recalls that the poltergeist would throw things around, make noises and create water puddles.

Once night, they carried out an experiment to test its powers. They placed eggs in a wooden box and someone, these eggs started flying and smashing on the floor.

The Pontefract poltergeist, also known as the Black Monk, became a cause celebre among poltergeist chasers. 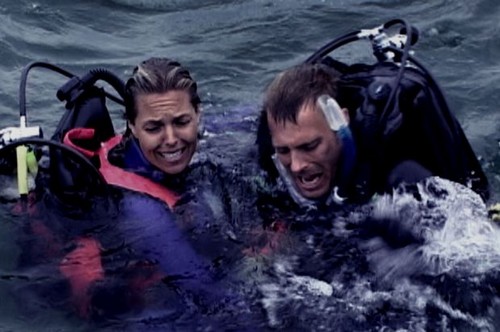 The 2003 psychological horror film is loosely based on the true story of Tom and Eileen Lonergan who were stranded in the Coral Sea. The couple had decided to join a scuba diving tour on January 25, 1998. The boat which transported the group of divers to the diving site departed before the Lonergans returned from the water. Two days later, they noticed the belongings of the couple on the ship.

Air and sea search took place three days after the incident. The bodies of Tom and Eileen were never found. A diver’s slate was found, it reportedly read: We have been abandoned on A[gin]court Reef by MV Outer Edge 25 Jan 98 3pm. Please help us [come] to rescue us before we die. Help!” 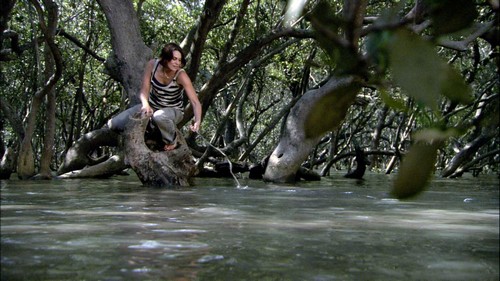 The 2007 British-Austrlian film is inspired by the true story of a crocodile attack in December 2003.

Three friends, Brett, Shaun and Ashley arrived at their usual racing site, on the edge of Litchfield National Park. The trio spent an enjoyable day and at 4 PM, they went down to the river to wash their clothes and boots because they were covered in mud. At that time, the water was fairly high.

Brett was washed away by the water. Shaun and Ashley went out after him to help him. After they caught up with Brett, they looked for a way to get back to the dry land. Shaun heard Ashley yelling out that there was a crocodile. He swam to the nearest tree and helped his friend. They both searched for Brett but to no avail. After a while, they spotted the crocodile with Brett in his jaws. The crocodile remained looking at them for a couple of minutes with their unmoving friend in between his jaws before swimming away. It was the last time they had seen their friend. 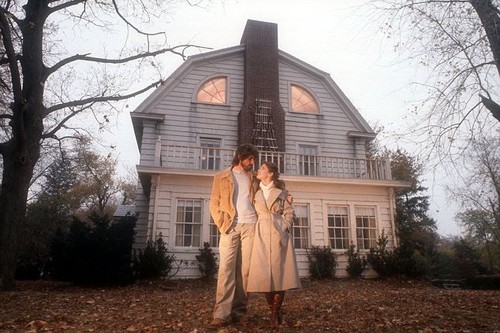 The true story of the Amityvile horror begins with the DeDeo Family, the previous owners who were murdered in the house. The DeFeo family consisted of Ronald DeFeo, his wife Louise and their four children: Ronald Jr, Dawn, Alison, Marc, and John Matthew.

Ronald DeFeo Jr, who was also known as Butch, took his father’s shotgun and killed his family, starting with his parents before moving to his siblings. He left his family’s bodies in their beds and walked to a local bar screaming that his family had been murdered.

Butch was taken in for questioning about the murders. At first, he blamed the murders on his friend Louis Falini. Eventually, he confessed to the murder of his family. He was sentenced to 25 years to life on six counts of second degree murder.

On December 18th, 1975, the Lutz family moved into their new home. As soon as they moved into the house, they started to experience supernatural phenomenon including stranger noises, foul orders and strange voices. Their daughter, Missy, had an imaginary friend who had the same name as one of the DeFeo daughters. 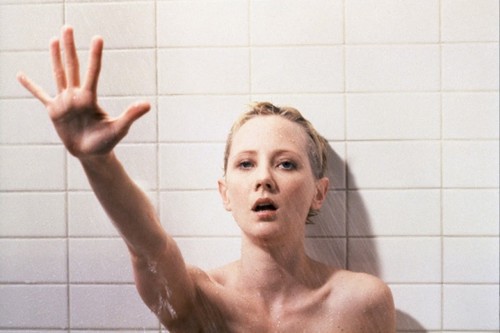 The 1998 American horror movie is inspired by the Wisconsin serial killer Ed Gein. He was born in 1906 in rural Wisconsin and was raised alongside his older brother Henry Gein. Their mother, Augusta Gein, had prohibited her sons from the outside world. Ed only left the farm to attend school. Henry Gein often spoke ill of their mother around Ed, but the younger brother always defended her.

On May 16, 1944, the farm caught on fire which drew the attention of the local fire department. After the fire, Ed reported his brother missing. He was found dead with bruises on his head.

Augusta died on December 1945 due to a stroke. After her death, he became obsessed with dead people. He admitted to exhuming 9 bodies and denied having sex with any of them. He was arraigned of first degree murder, where he pleaded not guilty by the reason of insanity. He spent the rest of his life in a mental hospital.