Human mothers aren’t the only ones to go to great lengths to ensure the health and survival of their beloved babies. The animal kingdom also boasts some pretty incredible mothers, some of whom use some strange (and sometimes disturbing) techniques to make sure their offspring will thrive. Enjoy this list of the 10 most devoted animal moms (dedicated and unusual). 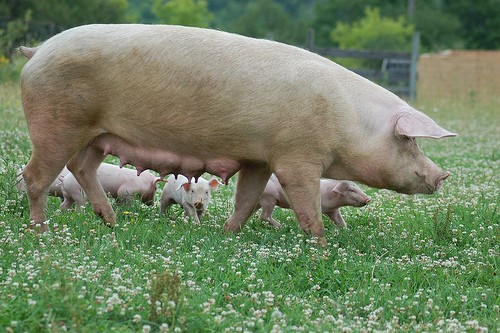 There’s nothing more comforting or nurturing than a mama singing a soft, sweet lullaby to her baby. Think human moms are the only ones to sing lullabies? Think again. Pig mamas are known to sing sweet snort-filled melodies to their precious piglets while they nurse. The song begins with the mama pig letting out a specific series of grunts to let her little ones know that it’s time to nurse and also to signal that she is about to lay down and that they must move out of the way.

Once mama pig is nestled comfortably on her side, her song changes to a tune that invites them to feed. As her babies nurse her song becomes a delightful, rhythmic song that changes tone towards the end to signal to the little ones that meal time is coming to a close. How many other moms in the animal kingdom are devoted enough to make up entire songs for their little ones?

When we think of alligators, most of us picture a perfectly designed killing machine with jaws of death. However, while alligators are certainly one of the finest and most effective predators of the animal kingdom. They’re also some of the most underrated best animal moms. Members of the reptilian order, crocodilia, are the only reptiles that care for their offspring once they have hatched.

When the baby alligators start the process of hatching, they begin making noises to alert their mother, who uncovers the nest and gently picks up the hatchlings in her strong jaws, carrying them to water. She softly shakes her head, encouraging them to swim out from her mouth and gently rolls eggs around in her mouth if the hatchling is struggling to free itself from the egg. Once the baby alligators are fully hatched and released into the water from their loving mother’s jaws, they will stay together for up to a year, being fiercely protected all the while by their strong and loving alligator mama. 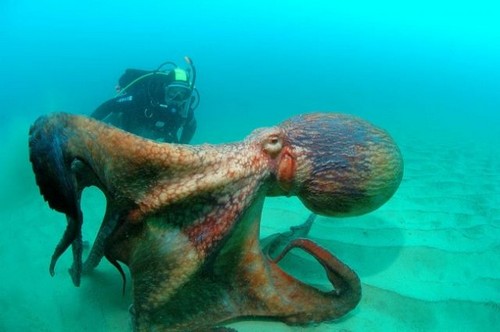 Octopus are known for their clever, and often mischievous, ways, but who would have guessed that they’re also one of the most dedicated animal moms on the planet? The giant Pacific Octopus spends 53 months (that’s almost 4.5 years!) caring for her clutch of over 50,000 eggs in her carefully guarded den before the babies are ready to be released into the depths of the Pacific ocean. She lays the eggs one by one, and then carefully braids the free floating babies together and attaches them to the walls of a small, well-hidden cave. Here in this cave she will stay for years, while the babies develop in their egg sacs.

Here’s the heartbreaking catch though- while the mama octopus selflessly guards her babies, gently brushing them with her tentacles to makes sure nothing harmful settles on them, and keeping predators away, she slowly starves to death. After years of starving, her body breaking down, her life force depleting, she uses the last of her energy to blow her babies into the ocean, and then quietly passes away. The giant Pacific octopus gives the ultimate sacrifice for her young so that they may live and flourish- what more can a mother do? 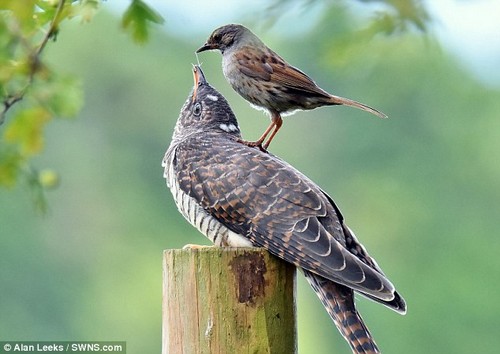 The cuckoo is a bird classified as a type of brood parasite. This mean this sneaky mom lays one of her eggs in the nest of an unsuspecting smaller bird of a different species. The cuckoo hatchling, due to its larger size, will develop faster and force the other chicks out of the nest, where they will soon die.

The tricked adoptive mama bird then raises the imposter hatchling, devoting her full attention to the undercover cuckoo baby. This strategy of the mama cuckoo laying her eggs in the nests of other small species helps ensure that her babies will have the greatest chances of survival and will not have to compete with their siblings to survive. But will only have to force out the smaller chicks of the fooled mama bird’s nest. While this scheming mama may not be the most involved mother on our list, she certainly goes to unique lengths to ensure the survival of her babies. 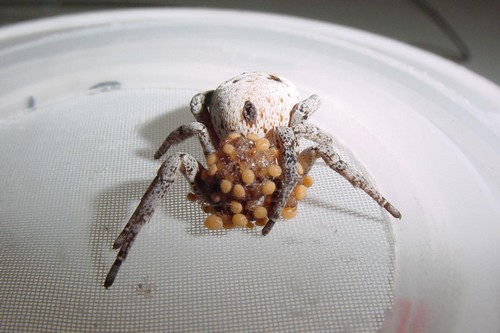 These spiders, also known as desert spiders, have some of the strangest mothering processes of the animal kingdom. Similar to the giant Pacific octopus, these spider mamas must die in order for their young to live.

In this gruesome twist on the octopus’s sad tale, the babies actively kill and eat their mama. After a month of feeding regurgitated meals to her new hatchlings, the mama spider willingly invites her murderous babies to climb over her body, where they inject her with lethal venom and digestive enzymes, and then devour her. Once they have eaten their loving mother, the murderous rampage continues as the strongest and fastest of the baby spiders cannibalize their siblings before finally leaving this web of nightmares and moving out into the world. This mama gives her life, and in one of the most gnarly ways possible, to ensure her babies can be strong enough to survive in this utterly weird world we live in. 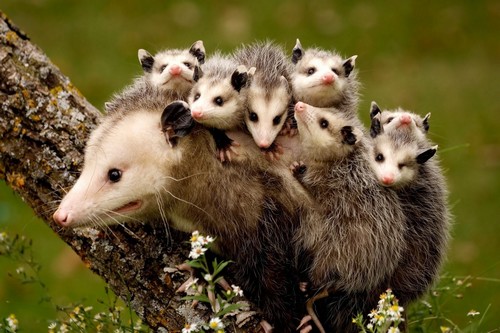 Opossum mamas are truly some of the most dedicated mothers of the animal kingdom. These marsupials carry their tiny newborns in their warm, cozy pouch for the first 2 months of their lives, nursing on their mother full-time. Once the baby opossums are able to finally venture outside of their mother’s protective and nourishing pouch, mama opossum still carries her babies like the heavy lifting, hard-working mom she is. For the next three months, this devoted mother continues to carry her many kiddos on her back, helping to ensure their safety as they becomes strong and independent enough to finally carry their own weight. The opossum mom goes to great lengths to make sure her adorable, furry offspring are taken care of, and if this means hauling around her ever-increasing-in-size-babies around on her back for months, then so be it. 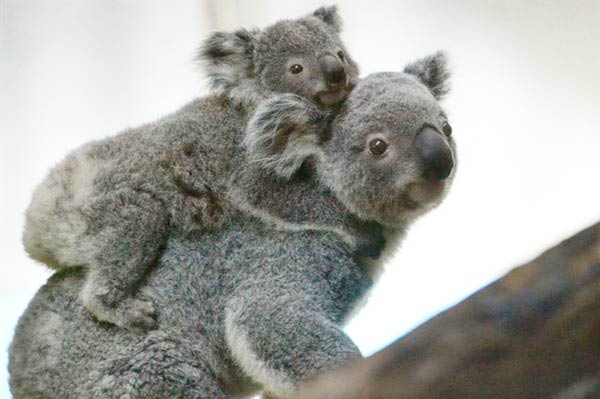 Koala moms aren’t afraid to go to some pretty gross lengths to care for their young. The diet of koalas consists of just one thing- eucalyptus leaves, which are highly poisonous. Adult koalas counteract this poison through having a digestive system lined with a specific kind of bacteria that allows them to safely digest their deadly meal.

Baby koalas, however, do not contain this crucial bacteria in their digestive system. Therefore, their mother selflessly chews her own feces, and feeds them to her young in an act of some serious mothering dedication. You’d be hard pressed to find many mothers that would go to such stomach churning lengths for their little ones. Thankfully, koala mama will do what it takes, and when the going gets tough, the tough…chew on their own feces?

With big round puppy eyes and a soft furry body, baby harp seals are perhaps the cutest newborns on this list. They also may be some of the most greedy. When baby harp seals are born, they are completely dependent on their dedicated seal mamas. The harp seal mother fiercely protects her newborn against potential predators and guards them for the first two weeks of their life in an icy nursery of other moms and pups. During this time, the mom constantly nurses the baby harp seal, while eating nothing, losing about 6 pounds a day (that’s a total of approximately 80 pounds!).

Conversely, during this time, the baby seal feasts on the highly fat-rich milk, and gains about 5 pounds a day. This dedicated mama may not commit the ultimate sacrifice like some of the other moms on this list, but she certainly goes through her own hardships to ensure the health and strength of her young one. 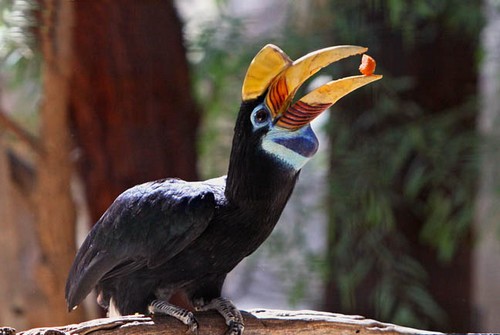 These colorful and unique birds that call the island of Sulawesi, Indonesia their home boast truly loyal mothers. Mother hornbills create nest in the holes of trees, and as such must protect their nest of eggs from many tree dwelling predators. Lizards of that region especially love to snack on hornbill eggs and the mother must stay ever vigilant to ensure that her precious eggs don’t become lizard food.

So how does she fulfill this task? For one thing, she doesn’t leave her nest a single time in the entire two-month period before the baby hornbills are ready to hatch. And her second strategy, well, let’s say she’s taken a page from the parenting book of mama koalas. That’s right- she uses her own feces. Her use of feces however, involves sealing the entrance to her nest to keep out predators. These unwavering mothers aren’t going to just let predators snatch her precious babies, no, she’ll be sure to fulfill her mothering duty. 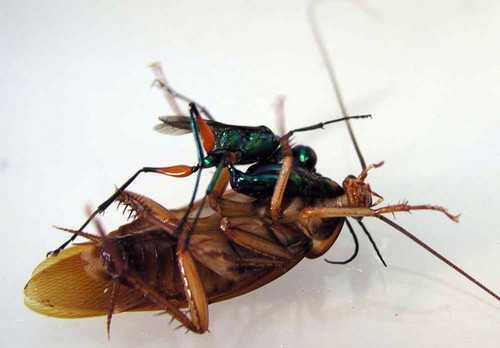 The magnificently colored wasps are not only beautiful insects, but they make dedicated mothers (in an admittedly disturbing manner). When a mother jewel wasp is ready to lay her egg she embarks on a truly disturbing journey.

First, she hunts down a cockroach, stinging it in two specific places that essentially zombifies the helpless insect. The venomous stings ensure that the cockroach is temporarily paralyzed and its escape reflex is disabled before the mama wasp pulls the unlucky roach by its antenna into a burrow where it lays its egg on the cockroach’s abdomen. The mother from hell then fills in the burrow entrance, and, after three days, the egg hatches producing a jewel wasp larva. The larva immediately begins to feed on the still living zombified roach, chewing its way into the roach’s abdomen where it lives for another 8 days.

Horrifyingly, the larva then feeds on the roach in a precise manner that ensure the poor insect will stay alive long enough for the larva to reach the pupal stage and form a cocoon inside the roach’s body-turned-house. All of this hideous process is thanks to the mother jewel wasp’s disturbing process of ensuring her baby will survive. Three cheers for moms, right?