There is only one planet that we know of that can support life and that is Earth, as you may have guessed. Throughout hundreds of years, the humankind has made remarkable leaps toward progress in science and technology but despite these progresses, there are still things that we know nothing about. Questions that we don’t have the answers to. One such question is: Are we or are we NOT alone in this universe? Do the planets beyond our solar system called exoplanets support human life as well? Astronomers are still finding the answers to these questions but through the help of NASA‘s Kepler mission, the answers don’t seem so far away. Through the kepler, over the years we have found a lot of potentially habitable planets. Exoplanets that are orbiting their host star in just the perfect proximity not too close that they are too hot to live in, yet not too far that they are too cold. This is called the habitable or “goldilocks” zone.

Water is essential to life. In order for complex life to survive, there has to be liquid water. Most of the time, water can only occur in the goldilocks zone.We narrow the planets down to the 10 most potentially habitable ones known to date based on their Earth Similarity Index (ESI) which is a standard measure of how similar to Earth another planet is. Check out the 10 potentially habitable planets: 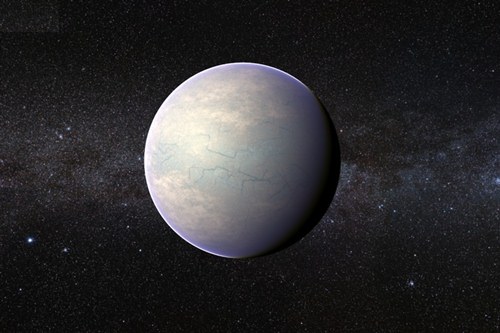 Discovered in 2012, this unconfirmed exoplanet candidate is one of the most potentially habitable planets being about four times as massive as Earth, making it a “Super Earth”. It lies just 11.905 light years from Earth and is the fourth planet of the system in distance to its star, the Tau Ceti. However, it orbits on the hot inner edge of its host star’s habitable zone. It lies somewhat closer to its star than Venus does to the sun and thus revolves faster than Earth. As a result of this, Tau Ceti e, depending on its temperature, could be a mildly hot planet suitable for life or a scorching one like Venus. If you lived there, you’d see a yellow sun in the sky, and your year would just last 168 days. 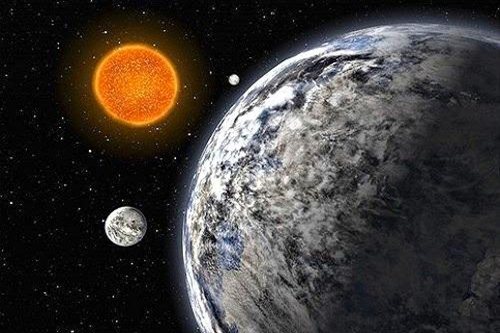 Sitting 1,743 light years from Earth down the Saggitarius arm of our galaxy, Kepler-283 c discovered in early 2014 is one of the two planets that orbit the star Kepler-283. It lies about one – third the distance from its star than Earth and is allegedly among the most potentially habitable planets. It completes one orbit every 93 days and is about 1.8 times bigger than Earth. 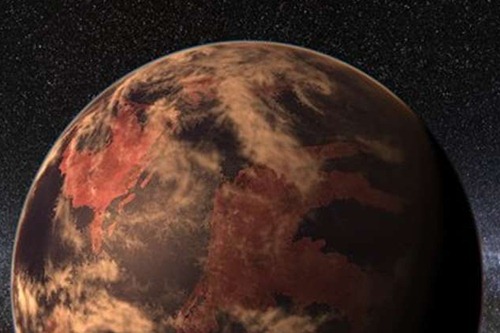 The star EPIC 201367065 (Yeah, let’s just call it EPIC), is a cool red M-dwarf about half the size and mass of our own sun, and there are three known Super-Earths orbiting around this star. Lying at a distance of 147 light years, this star ranks among the top 10 nearest stars known to have planets. Its proximity means it’s bright enough for astronomers to study the planets’ atmosphere and to determine whether it is conducive to life.

The three exoplanets orbiting EPIC are 2.1, 1.7 and 1.5 times the size of Earth. The smallest and outermost planet called EPIC 201367065 d orbits on the edge of the habitable zone, and it also orbits far enough that the levels of light it receives from its star is similar to those received by Earth from the Sun.

“The compositions of these new found planets are unknown. There is a very real possibility that the outer planet is rocky like Earth. If so, this planet could have the right temperature to support liquid water oceans,” said Erik Petigura, a graduate student at the University of California, Berkeley. 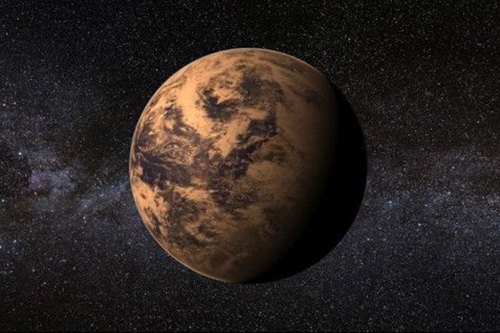 Gliese 832 c has a mass approximately 5.4 times the size of Earth and an orbital period of approximately only 36 days, this is because it lies near the inner edge of its host star’s habitable zone. Even though it orbits much closer to its star than Earth does to our Sun, it receives just the same amount of average energy as the Earth does. This is because it orbits a red dwarf. This exoplanet may also have Earth-like temperatures, albeit with large seasonal shifts as it orbits its star.

However, with a denser atmosphere that Super-Earths are expected to have, this exoplanet may well render be inhospitable because denser atmosphere could make it much hotter and more like the planet Venus, greatly reducing the chance for life. 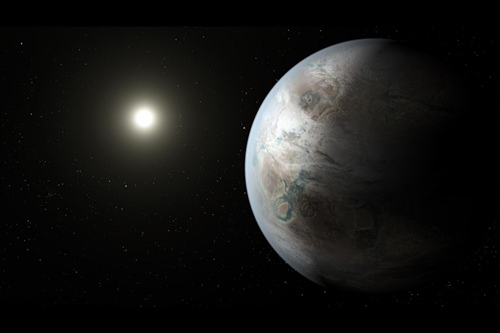 This newly discovered exoplanet is regarded as Earth’s “older cousin” or Earth 2.0. Astronomers have revealed that Kepler-452 b is the most similar planet to our own ever found with a ‘substantial opportunity’ for life. However, its days may already be numbered.

This exoplanet orbits a somewhat larger, brighter and older star around the same distance Earth does to our own and it completes one orbit every 385 days – only 20 days longer than the Earth. With a star that’s 1.5 billion years older than the sun, this exoplanet is considerably warmer than the Earth. This also means that Kepler-452 b receives 10% more energy than Earth. It is also 1.6 times larger. Because of this, the surface gravity is considerably stronger than the pull we are used to here but that’s not a thing that we need to worry about. “It might be quite challenging at first but over time, we would adapt to the conditions, and perhaps become stockier over a long period of many generations.” Jon Jenkins of NASA’s Ames Research Center in Moffett Field, California said. Researchers are still looking into whether it might be a rocky planet or not.

Be that as it may, this exoplanet is 1,400 light years away. So unless we build a spacecraft that can travel millions of kilometers per hour, reaching this planet is an impossibility. Also, because of its aging sun, Kepler-452 b might soon experience a runaway greenhouse effect, similar to the one that changed Venus from a potentially habitable world billions of years ago to the sweltering hothouse it is today. 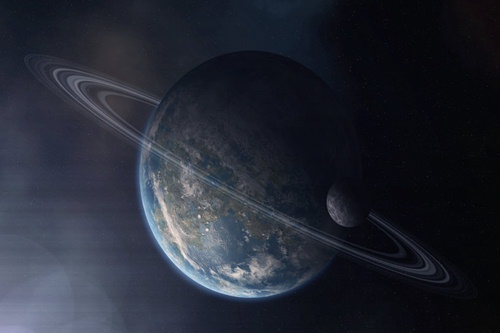 Kepler-62 e is a Super-Earth exoplanet that orbits in the inner habitable zone of its star, Kepler-62 (which is slightly smaller and cooler than our sun). This exoplanet which is believed to be a water world lies just about 1,200 light years away from us in the constellation Lyra making it one of the most potentially habitable planets. It completes one orbit every 122 days and is 1.6 times larger than Earth. 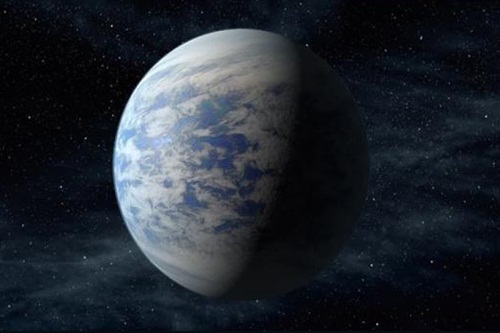 Kepler-442 b is a confirmed exoplanet which is almost the same size as Earth. It completes one orbit every 112 days in its orange dwarf star, Kepler-442. It lies about 1,120 light years away from Earth in the constellation Lyra. It has a 60% chance of being rocky and gets about two-thirds as much light as Earth. The scientists give it a 97 percent chance of being in the habitable zone making it one of the top most potentially habitable planets discovered.

A little over 23 light years away from here in the constellation Scorpius, lies Gliese 667C c which was discovered in 2011 by American and European astronomers. It is four times as massive as Earth and if it is a rocky planet, likely over half-again as large. It is also very close to its star, only less than half distance the Mercury is from our Sun. It takes only 23 days and 14 hours for it to complete one orbit around its star. Because of this, you would think that this exoplanet is not able to host life because of its close proximity to its parent star but that’s not the case here. Gliese 667C c orbits around a red dwarf star which is tiny compared to the Sun. That means that the Earth and this exoplanet are at roughly the same relative spot in their stars’ habitable zone.

However, what makes this planet possibly support human life is the narrow strip of land halfway between its hot and cold side that is just the perfect temperature to support life. Be careful not to step on the wrong side though. 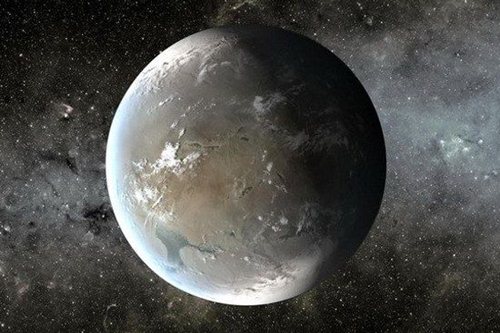 Kepler-296 e is a confirmed Earth-sized exoplanet orbiting Kepler-296 in its habitable zone. It has a radius 1.75 times that of Earth and it completes one orbit every 34.1 days. Kepler – 296 ranks second among the potentially habitable planets. 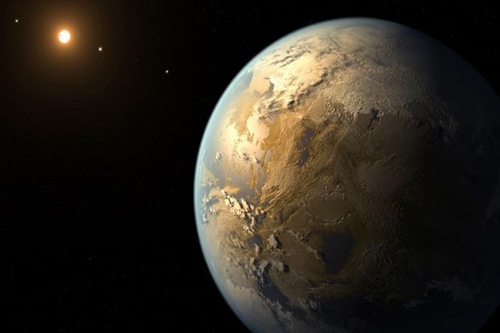 Found in the constellation of Lyra and just 470 light years away, this planet named Kepler-438 b is only 1.2 times larger than Earth. It completes an orbit every 35.2 days around an orange dwarf star and it receives 40% more heat from its star than our Earth does from the sun. Because it’s only slightly larger than Earth, the odds of this exoplanet being rocky are about 70%, researchers said.

Now, let’s clear this up. You might think, “If Kepler-452 b is the most earth-like planet ever found, why isn’t it on the number one spot?” Well, according to the Habitable Exoplanet Catalogue, at the University of Puerto Rico at Arecibo, so far, the most “Earth-like” exoplanet, based on its size, mass, distance from its star, amount of energy received, etc., is Kepler-438 b.

Kepler-452 b has the advantages of the similar star and similar orbital distance, however, its size keeps it out of the top spot. This does not mean that Kepler-452 b is less habitable than Earth, though. It only means that the planet is just 83% similar to Earth.