Professional Wrestling has always relied on celebrities to get the mainstream attention the celebrities bring along with them. In fact, if it hadn’t been for celebrity involvement, wrestling as we know it wouldn’t have become as huge as it is today.

Back in 1985, Vincent McMahon, the owner of World Wrestling Entertainment, made a gamble that would have either ruined him financially, or change the way people look at wrestling forever. He spent an insane amount of money on the first WrestleMania, booking celebrities like the late, great Muhammad Ali, Cindy Lauper and Mr.T. Hulk Hogan wrote in his autobiography that Mr. T saved the first WrestleMania by being a part of the main event, ultimately making it a big success.

Since then, there have been numerous instances when celebrities donned wrestling gear and locked horns with the absolute best in the middle of the ring. 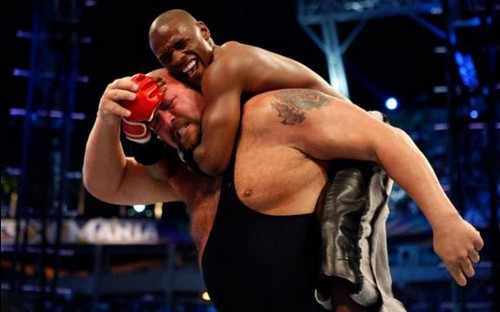 Mayweather was 39-0 in 2008 when the WWE convinced him to work a match with The Big Show at the biggest event of the year, WrestleMania. If reports are to be believed, he was paid a whopping $20 million for the bout.

Even though Mayweather was booked as a face going into the match, even saving his friend Rey Mysterio from getting beaten up by The Big Show, he was heavily booed by the 74000 plus fans inside Citrus Bowl at WrestleMania. This reaction was attributed to his arrogant “bad boy” persona in real life. With the aid of his bodyguards and a brass knuckle, Mayweather succeeded in knocking out his opponent, maintaining his unbeaten record. His appearance at Mania resulted in over a million PPV buys, which grossed $23 million in revenue.

As the “Road to WrestleMania” began in 1995, NFL Linebacker attended the WWE PPV, Royal Rumble, where he got into an altercation with one of the most hated heels at the time, Bam Bam Bigelow. This resulted in a match at the “Grandest stage of them all”.

The WWE heavily promoted this match, and gave it the main event spot over the WWE championship bout between Shawn Michaels and Diesel. The fans cheered for Taylor throughout the match, but the buy rates of the PPV told an entirely different story. WrestleMania 11 is considered as one of the worst Manias of all time, despite the media coverage it managed to gather courtesy Taylor’s involvement. Having said that, the football star put on a great show, and unlike many celebrities in the past, managed to give the fans an entertaining match with several good looking spots. 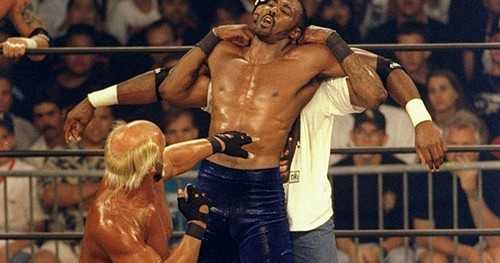 At the peak of the most exciting period in professional wrestling history, WCW was doing its best to best the WWE and put them out of business. Ted Turner’s money never stopped coming in, and the company kept bringing in celebrity after celebrity to gain media attention and PPV buys. In July 1998, DDP managed to convince his friend and NBA star, Karl Malone to wrestle a match at the “Bash at the Beach” PPV. Another star was added into the mix, when WCW brought in Dennis Rodman.

Malone teamed up with DDP against the heel team of Hollywood Hogan and Rodman. The match was poorly received and is considered one of the worst of all time, which wasn’t a surprise, considering the fact that both Malone and Rodman had never stepped foot in a ring before.

The clusterf**k of a match ran for over 23 minutes, with Malone and Rodman exchanging nthing but headlocks and clotheslines throughout the entire ordeal. 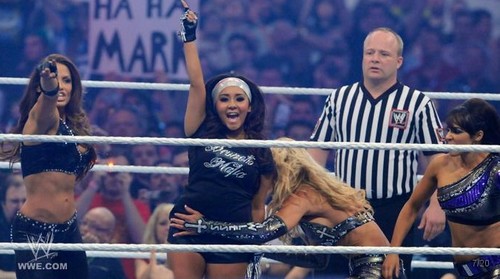 The popularity of the MTV’s hit reality show, Jersey Shore opened many doors for Snooki Pollizi. NY Times deemed her as “the breakout member of the cast”. In 2011, her mainstream fame led the WWE to sign her up for a match at, you guessed it right, WrestleMania. She made an appearance on the flagship show, Monday Night Raw, where she got into a fight with LayCool, a heel women pair at the time. This led to a mixed 6 person tag team match on the “Show of Shows”, as Snooki teamed up with popular diva Trish Stratus and John Morrison against the trio of LayCool and Dolph Ziggler.

The match was nothing to be remembered, but it was apparent that Snooki had gone through some training in the days leading up to the match. She performed some impressive wrestling moves on her opponents, including the highly lauded HurricaneRana. She was also awarded the Slammy Award the same year for her appearance at Mania. 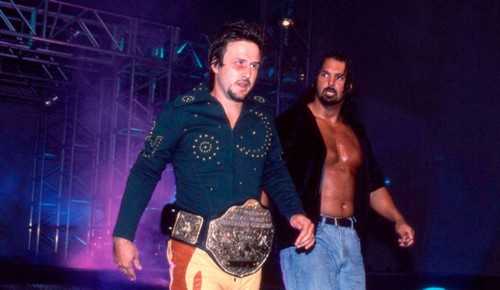 In 2000, WCW was a sinking ship, with crappy ratings and low PPV buy rates. In a desperate act to garner media attention, WCW produced “Ready to Rumble”, a movie starring Arquette and a bunch of WCW wrestlers. The movie bombed at the Box Office and WCW followed it up by bringing Arquette into the weekly storylines.

He won the World title in a tag team match on WCW’s secondary show, Thunder, by pinning Eric Bischoff. The move backfired and he kept the title for a grand total of 12 days. David Arquette’s World championship run is widely regarded as one of the biggest reasons why WCW went bankrupt. 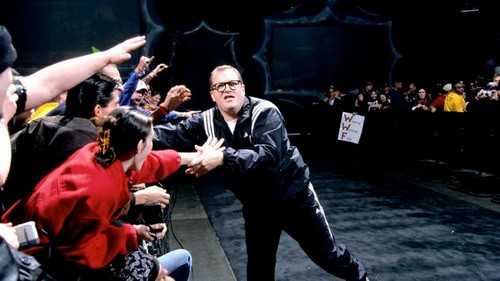 Unlike WCW, where fans used to get embarrassed watching celebrities performing cringe inducing moves in PPV main events, WWE knew how to handle their celebrities. The company always treated them as celebrities, and not refined wrestlers who could be put in the main event at a moment’s notice. The best example of this practice was Drew Carey, who made an appearance in the Royal Rumble PPV in 2001.

He entered the match after 2 wrestlers accidentally eliminated each other. Carey entered the ring and waved at the fans for a while, before the next entrant’s arrival, who turned out to be Kane.

Kane caught hold of Carey, who seemed to be freaked out at the sight of the monster, and proceeded to choke slam him. In a hilarious bit, Carey tried to offer some money to Kane, in exchange of sparing him. This received a huge pop, but Kane was adamant on slamming him. Another wrestler entered, diverting Kane’s attention and allowing Carey to eliminate himself by getting down the ring over the top rope. This one off appearance was well received by the fans and Carey was inducted into the WWE Hall of Fame in 2011 for his appearance. 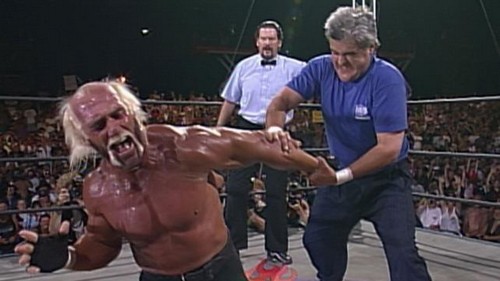 One of the most famous talk show hosts in the US, Jey Leno has not just competed in the squared circle, but has also defeated perhaps the greatest wrestling superstar of all time!

In the late 90’s WCW collaborated with Jay Leno in one of their several attempts to best the WWE by introducing as many celebrities on PPV as they possibly could. A storyline spanning several weeks saw Jay Leno and DDP teaming up against Hollywood Hogan and Eric Bischoff in the climax- the main event of the Road Wild PPV.

After a snooze fest of a match (which wasn’t a surprise considering Leno’s wrestling abilities), The duo of Leno and DDP emerged victorious. 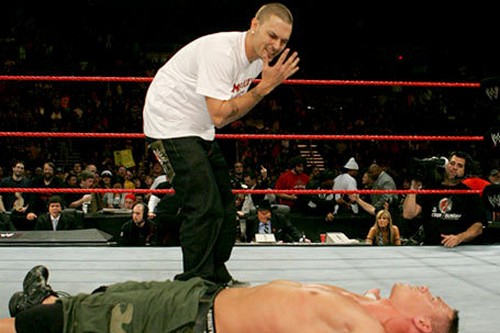 The notorious American dancer and rapper, once locked horns with the biggest superstar of this generation– John Cena!

K-Fed began appearing on WWE TV in October 2006, getting into physical altercations with the then WWE champion John Cena on several occasions. He even cost Cena his title at the Cyber Sunday PPV AGAINST King Booker and The Bigshow, following which he challenged Cena to a match on an upcoming episode of Monday Night Raw.

In one of the biggest upsets in the history of professional wrestling, Kevin Federline defeated Cena after getting aid from Umaga and Johnny Nitro. 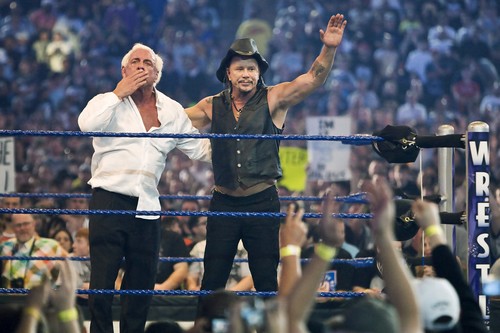 Rourke worked with WWE during WrestleMania 25 and was almost on the verge of competing in the ring against Chris Jericho, but the plans didn’t come to fruition.

Rourke was at ringside suring the PPV though, and cheered the Hall of Fame Trio of Jimmy Snuka, Roddy Piper and Ricky Steamboat, as they faced off against Chris Jericho in a 3-on-1 handicap match. After Jericho won the match, Jericho challenged Rourke to face him in the ring, to which Rourke responded by hitting him with a punch. The punch subdued Jericho and the entire arena erupted into cheers, making this one of the very few celebrity involvements that were received well by the hardcore wrestling fans. 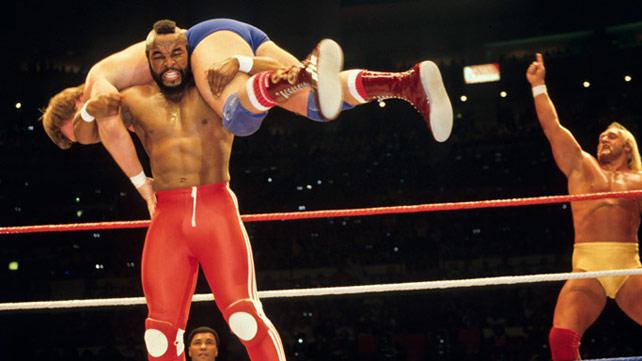 Mr. T was one of the primary reasons why wrestling became a mainstream attraction in the mid-80s. His involvement in the main event of the inaugural WrestleMania marked the peak of the Rock ‘N’ Wrestling Era, as he teamed up with Hogan to defeat the duo of Paul Orndorff and Roddy Piper. The following year, he faced off against Roddy Piper in a boxing match at WrestleMania 2. Amidst rumors of real life heat between Piper and T, the match gained coverage in the mainstream press. Mr. T defeated Piper after he was disqualified for bodyslamming T in the fourth round.

Rumors have been circulating that Dwayne ‘The Rock’ Johnson and his FF co-star Vin Diesel are going to go at it at next year’s event, inside Camping World Stadium in Orlando Florida, a match that is already being billed as the culmination to their rift on the sets of Fast & Furious.

In addition to that, it’s almost certain that The Big Show and Shaquille O’Neal would be battling at the same event. This match has been several years in the making since the 2 faced off in an episode of Monday Night Raw back in 2009 and again during a battle royal at this year’s WrestleMania.