Nothing captivates a viewer quite like the prospect of a film “based on a true story.” Stories about real people, places and events tend to add an extra element of magic to a movie. Some directors seem to believe that their artistic license enables them to venture far beyond what could be reasonably defined as “historically accurate.” Audiences then proceed to consume these historically inaccurate movies under the incorrect assumption that these movies are completely true.

Characters are added and removed, romantic interests are created, and moments are exaggerated or fabricated entirely! And sometimes they even change the dates entirely. Despite some truth bending and trickery, many of these films are widely beloved by fans, though they rarely prove to be very popular amongst historians. 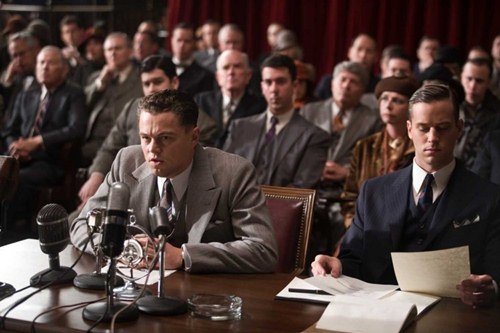 John Edgar Hoover was the founding father of FBI who was known to often overstepped his Federal jurisdiction. Though the biopic is incredibly made and acted in, the film makes large shift from the original story. And it specially skips harassment of judges, prominent Hollywood figures, artists and exaggerates certain events out of proportion. The film portrays Edgar as a tortured visionary and downplays the wrong things he’s done, justifying them as necessary for the greater good. 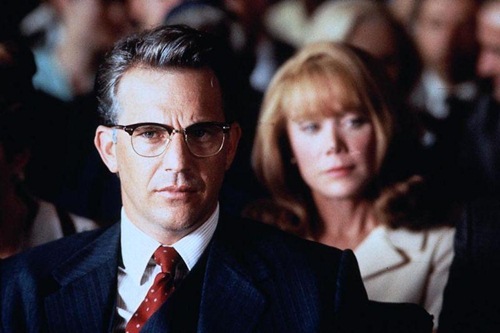 Director Oliver Stone has an obvious love for making historical films, and this thriller tracks a New Orleans District Attorney (played by Kevin Costner) who uncovers that there’s more to the Kennedy assassination than the official story. ‘JFK’ is among the most historically inaccurate movies. The opening of the film is a montage of both archived and recreated footage, giving the audience the impression the movie will take more of a documentary approach. *Spoilers* It doesn’t.  It convincingly merges truth and conspiracy, putting weight behind the popularization of ‘JFK’ conspiracies in the years since his assassination.

The conspiracy used in ‘JFK’ was based on the 1967 spoof, The Case of Jim Garrison, which was revealed to be false in 1972. In the film, key witness Perry Russo is shown freely giving his testimony, though in reality, he was drugged before his testimony. A vital scene in the movie is David Ferrie’s breakdown and confession, though that has been proven to be a figment of the director’s imagination; Ferrie has always maintained his innocence.

Stone’s thriller even managed to strongly imply that Lyndon B. Johnson, Kennedy’s successor in the White House, was a driving force behind the assassination, though very little evidence exists to support that claim. 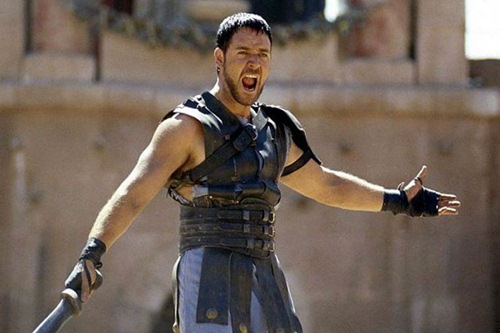 Another Best Picture winner that was a bit light on the facts, ‘Gladiator‘ is an epic historical drama directed by Ridley Scott, starring Russell Crowe as the fictional Roman General, Maximus Decimus Meridius. Maximus is betrayed and falls from General to slave, where he gains widespread respect fighting as a gladiator. While several historians were hired to consult on the film’s historical accuracy, it’s interesting to note that one left because of changes to the script making ‘Gladiator’ among the most historically inaccurate movies.

Some of the characters directly around Maximus are real historical figures, though the facts have been blurred. In the film, the Roman Emperor Marcus Aurelius is killed by his son Commodus, though in reality he died of chickenpox. Regarding Joaquin Phoenix’s snivelling, incestuous and creepy portrayal of Commodus, historical records indicate that he was nothing like this, and that he was a well-liked ruler for over a decade. He did fight in show combat, but was never murdered in the arena — in fact, he was strangled in the bath by his wrestling partner/lover Narcissus. 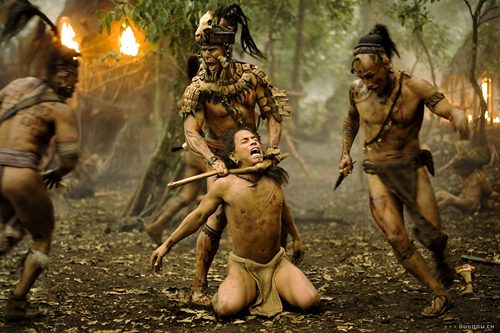 Set in the Mayan Kingdom in the face of its demise, the rulers insist the key to survival is to build more temples and offer human sacrifices. Jaguar Paw (Rudy Youngblood), one of the young men captured for sacrifice, runs away to avoid his death. The use of the real ancient Mayan language throughout director Mel Gibson’s film gives the film a true sense of authenticity, one that isn’t mirrored by its historical accuracy.

The Mayans in the film were portrayed as radical savages which were more akin to the Aztecs; the Mayans were a reasonably peaceful people. This fact alone lands ‘Apocalypto’ among the historically inaccurate movies. Mayans also rarely performed any human sacrifice. If they did, it was against treacherous elites, never common-folk. Additionally, the movie ends with the arrival of the Spaniards, which didn’t happen in Mexico until around 400 years after the Mayan collapse. 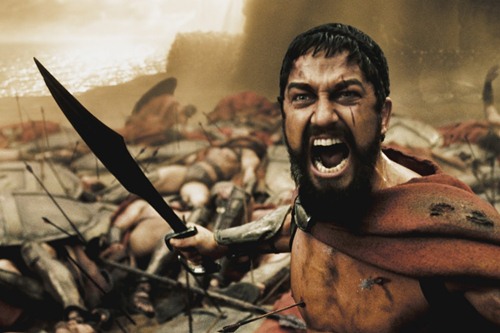 Zack Snyder’s breakout hit, ‘300’ is an adaptation of Frank Miller’s 1998 comic series, which itself is a fictionalized retelling of the Battle of Thermopylae. Although based on history, ‘300’ is among the top historically inaccurate movies. The battle is definitely one of the most one-sided efforts in recorded history, though not quite on the scale the film would lead you to believe. The 300 Spartans were unable to match their enemy and formed an alliance with other Greek city-states, pushing their ranks to around 7,000. And while their attire revealed chiseled abs that looked great on camera — and served as a source of inspiration for the Halloween costumes of fraternity brothers nationwide that year — the Spartans would have worn actual armor instead of the glorified loincloths featured in the film.

The Persian Empire were also represented inaccurately in the film. Xerxes certainly wasn’t a weird, bald giant with a deep voice and an effeminate appearance, and the Persian Empire actually prohibited slavery because of their Zoroastrian beliefs. In fact, the Spartans were one of the largest owners of slaves in Greece. Another odd inclusion is the Spartans teasing the Athenians for being “boy lovers,” when Spartans themselves weren’t all that shy about their Pederasty. 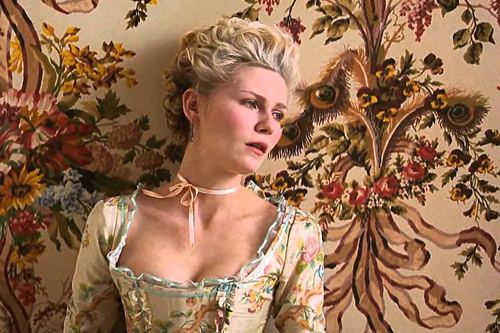 Sofia Coppola’s eye catching depiction of France in the lead up to the French Revolution is a beautiful film. The vibrancy of both color palette and costuming gave the movie a unique visual look, one that almost helped disguise the historical accuracy. The almost fantastical approach to the setting allowed Coppola to take (a bit too much) artistic liberty, resulting in the portrayal of France’s iconic Queen being more of a painting than a photograph.

Coppola’s visual style caused issues too. Clothes were dyed colors unavailable at the time, and even a pair of Converse shoes can be spotted under a dress. But the greatest liberties were taken in the storytelling department. In the film, Marie Antoinette and Louis-Auguste share a bed together, which they didn’t. Her seduction took a few months on screen. In real life, it was seven years. The main issue with the film is that there are no politics. It seems people don’t like her, but it’s not made clear why. All the time is tediously spent between shopping, eating, being fettered upon, and a sexual liaison with Count Axel Fersen — one which is historically disputed. Everything that was left out in the film makes it one of the most historically inaccurate movies. 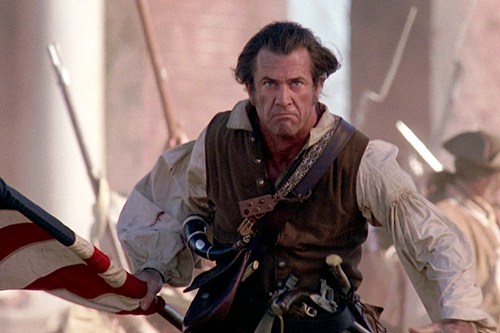 This portrayal of the American Revolution follows Benjamin Martin (Mel Gibson, in his second appearance on our list) as he leads the Colonial Militia after his son is murdered by a British officer. The film is more akin to American patriot propaganda, particularly in the unfair representation of the British Soldiers whose depiction is reminiscent of the Nazi’s in World War II. This is most prevalent in the scene where the soldiers burn the elderly, women and children to death inside a church. Jason Isaacs’ evil British colonel was based on the historical figure Col. Tarleton, and there is no evidence that he ever broke the rules of engagement, let alone by shooting a child in cold blood.

While Gibson’s character is a sympathetic father in ‘The Patriot’, it is historically recorded that the man on which his character was based, Francis “The Swamp Fox’ Marion, hunted Native Americans for sport and raped his female slaves. He also didn’t have his children until after the war — when he married his cousin. While watching this movie, definitely keep in mind that it’s almost entirely a work of fiction, albeit entertaining fiction. No fact typifies the inaccuracies in this movie quite like the final battle of Guilford Court House, where Martin defeats his nemesis. In reality, the Americans lost that skirmish. ‘The Patriot’ has ranked in the number three position in our list of historically inaccurate movies. 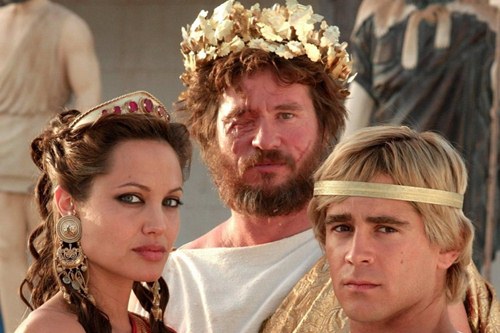 This epic about Alexander the Great’s conquest of the world has been met with controversy since its release, including a threatened lawsuit against director Oliver Stone (another repeat offender on this list) and Warner Bros. for the film’s inaccurate portrayal of history. One of the lawyers involved in the case, Yannis Varnakos, said that “the production company should make it clear to the audience that this film is pure fiction.”

Critical scrutiny from historians comes from the fact that the movie is more of a reduction and compression of Alexander’s life events, rather than an accurate biopic of the man’s achievements. The filmmakers condense several of his key life events into smaller ones, and some of his actions are even attributed to different individuals from those in history. The majority of actions and milestones depicted did in fact occur, though in different times and locations. For example, three major battles, the Battle of the Granicus, the Battle of Issus and the Battle of Gaugamela, are all merged into one. It is immensely difficult to piece together the proceedings of Alexander’s life, due to the inconsistencies of his historical records — so much so that there have been 4 Director’s Cuts since the film’s release to try and fix this issue. 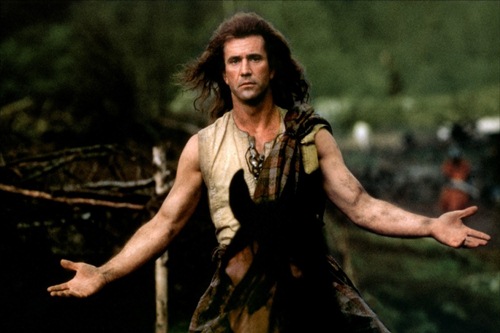 Director/star Mel Gibson’s third appearance on this list of historically inaccurate movies , ‘Braveheart’ follows William Wallace, a 13th century Scottish warrior who begins a revolt against King Edward I of England. The film dramatizes a lot, and the timeline is heavily altered, as real life historical figures’ ages simply don’t line up. Historians have taken issue with the film’s battle scenes as well, as the film depicts armies haphazardly running into the enemy rather than actual tactical warfare. The famous kilts which make the Scottish stand out against their English opponents are also being worn about 300 years too early.

The biggest inaccuracy is Wallace’s romantic interest. In the film, Wallace seduces King Edward II’s Wife, Isabella of France, and the resulting child was Edward III. According to the history books, Isabella was just 3 years old at the battle of Falkirk, and Edward III wasn’t born until 7 years after Wallace’s death. Those timeliness don’t really seem to add up. To add icing on the cake, remember the Battle of Sterling Bridge depicted in the film? It didn’t feature a bridge in real life. 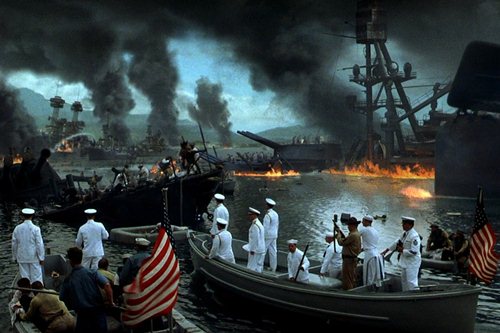 Michael Bay’s 2001 retelling of the Japanese attack on ‘Pearl Harbor’ doesn’t have much in common with reality, apart from the fact that Japan did of course bomb the United States in 1941. The movie follows fictional characters Danny and Rafe, who are stationed in Hawaii’s ‘Pearl Harbor’ during the attack, seeing them hop into planes to shoot down the enemy fighters. They live through the battle before being sent to bomb Tokyo.

Historians state that only a few Japanese fighters were ever shot down, while in the movie the number is well over 20. Also, fighter pilots would never have been sent to Tokyo to bomb targets. What’s more is that Rafe would never even have been allowed in the British squadron, as it was a violation of neutrality. The ultimate fictionalization comes when it is revealed that Rafe is not only a master aviator, but well-trained in the ancient art of Origami. An oddity, considering that Origami was only discovered by foreign troops after the war. These all pale in comparison to the moment when President Roosevelt stands up from his wheelchair to make a dramatic speech, of course.

Written by: Alex Durkee. Find him on Twitter at @alex_durkee1.