The Walt Disney Company has released somewhere around 55 animated feature length films. While some of these films, like The Lion King, are flagship marketing enterprises, other films, like The Black Cauldron, are often forgotten. Then, there is a third group of films, the concepts that Disney came up with but discarded before turning the ideas into films. What follows are those top ten unmade Disney animated films. 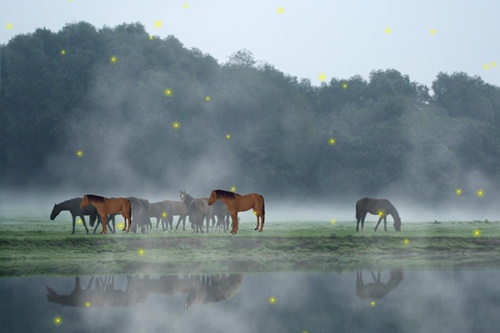 To be released in the late 90’s, Wild Life would have told the story of Ella, an elephant who after getting electrocuted is stricken with the delusion that she is a famous pop singer and quickly rises to celebrity. In addition to touches of adult humor, the film would have satirized 70’s American pop culture including figures inspired by Andy Warhol, Anna Wintour & Diana Vreeland.

Then in 2000, Roy Disney saw a rough screening of Wild Life and was disgusted by the film’s adult tone particularly one joke about gay elephants going down manholes. The film was officially shelved in 2000 and later went on to become one of the unmade Disney animated films. If Wild Life had been released, regardless of rather it was any good, the film would have predated Chicken Little as the first fully CGI produced Disney film. 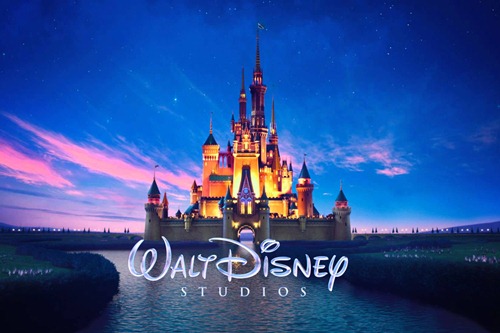 Also designed to be released in the late 90’s, My Peoples was a southern tale about two feuding families. Think the Hatfields and McCoys, only these families were called The Harpers and The McGees. A son and daughter from the feuding families fall in love. The daughter’s grandfather concocts a potion hoping to make the daughter fall out of love, only the potion ends up bringing a series of dolls to life.

Disney greenlit the film with a $45 million budget and invested several rewrites and a couple years of development into the picture. Voice actors were rumored to include Dolly Parton, Travis Tritt, Ashley Judd, Lou Rawls, Lily Tomlin, and James Carville. Disney hired Ricky Skaggs and Hank Williams III to compose music for the film. One song remains from the soundtrack to My Peoples called Tender Hearts, which details the background of the film.

Even from its inception, My Peoples seemed destined to rank among the unmade Disney animated films. Disney CEO, Michael Eisner, rejected the idea at first because he thought the story needed more conflict. When Disney’s head of animation switched from Thomas Schumacher to David Stanton, Stanton suggested retitling the film Once in a Blue Moon, Elgin’s Peoples, Angel and Her No Good Sister or A Few Good Ghosts and demanded a retool of the film’s entire plot. Stanton ultimately killed off the film by cancelling it in favor of Chicken Little because Chicken Little was a better known story. 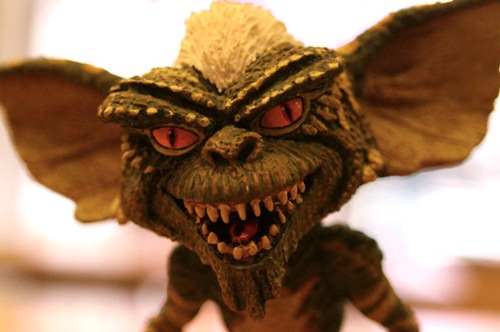 Discussed as a film project in the 1940’s, Gremlins would have combined the talents of Roald Dahl and Walt Disney. Written during his time in the Royal Air Force, Dahl’s story tells the tales of small mischievous creatures who while inclined to sabotage aircraft are re-trained by the Royal Air Force to instead fix the planes.

Disney went so far as to bring Dahl out to Disney’s Hollywood studios to work with various artists and writers to write at least two drafts of the script. The exact reason why the film was cancelled is uncertain, but here are some speculated theories: (1) Walt Disney decided audiences were tired of World War II films, and (2) Disney could never find out a way to make the audience like the Gremlins. And it remained as one of the unmade Disney animated films ever.

While the Gremlins have appeared in comics and the Epic Mickey video games, one wonders what the 1980’s Joe Dante film would have been called had Disney released Gremlins. Dahl wrote a book, which is long out of print and sought after by collectors, detailing the adventures of the Gremlins. 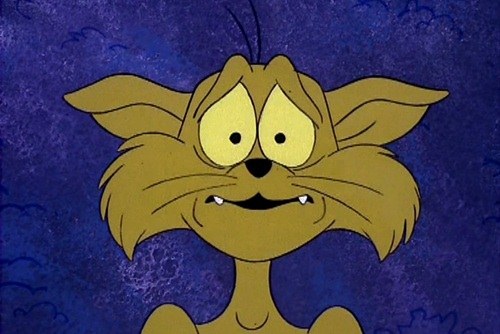 Scheduled for release in 2009, Fraidy Cat would have told the story of a London house cat who in an Alfred Hitchcock-esque twist is framed for the murder of a neighborhood canary and must clear his name.

Despite receiving much buzz around Disney studios, the film was never green lit allegedly because Disney executives felt the film’s plot was too obscure. Much concept art was drawn for Fraidy Cat, however, revealing a noirish tone.

The film was cancelled in 2005 and became one of the unmade Disney animated films. Maybe if Fraidy Cat had been released, there would have been a sudden demand for Alfred Hitchcock related merchandise. Instead, Disney played it much safer in 2009 and did the Disney version of the classic tale, The Princess and the Frog.

6. The Hero from Otherwhere 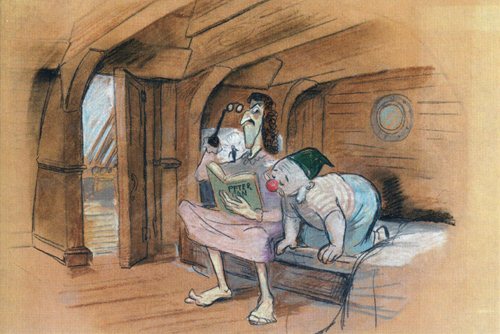 Scheduled for release in 1977, The Hero from Otherwhere told the story of two school age boys who were sentenced to the principal’s office and ended up on an endangered planet called Gwyliath.

The film was designed to combine live-action with cartoons. Several drawings for the film exist as crafted by Mel Shaw, a Disney legend who worked on numerous films from Bambi to The Lion King. Precious little is known about the history of the film other than the production was plagued with problems along the way including exorbitant costs to combine live-action with cartoons.

In 1983, a book of the same title was released by Jay Williams, a children’s author who has written numerous fantasy stories. Two years later, in 1985, Disney would adapt the children’s series, The Chronicles of Prydain, into the commercial disaster, The Black Cauldron. Those looking to get their fix of live action mixed with animation would have to wait until 1988’s Who Framed Roger Rabbit. While The Hero from Otherwhere, till dates remains as the one of the unmade Disney animated films. 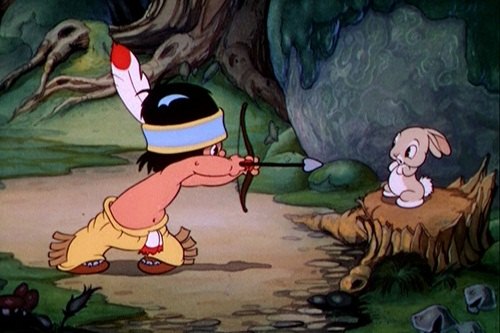 Predating Pocahontas by nearly fifty years, Disney planned to release Hiawatha in 1949. The film would have told the story of Hiawatha and how the great man united the Iroquois tribe as depicted in the Longfellow poem.

Rumors abounded that the film was to be drawn in a manner similar to Fantasia. Disney went so far as to send one of Disney’s chief artists to sketch and document the Great Lakes Region as research for the film. Although newspapers report the project as still active as late as 1951, the project was abandoned in 1949. Making Hiawata among the unmade Disney animated movies. Although unconfirmed, the exact reason the film was shelved was likely strong debate of the depiction of Native Americans. Rather than exist as a serious, animated character, the only depiction Disney release of Hiawatha is as a cherub-like character in Silly Symphonies.

Based on T.H. White’s 1946 novel about a girl who discovers a group of Liliputians, Disney working on developed an animated version of Mistress Masham’s Repose in the mid 1980’s. In addition to the story as told in the novel, all that exists of the film is a series of sketches.

Disney’s animation head at the time, Jeffrey Katzenberg, appears to have been the one who shelved Mistress Masham’s Repose. While Roy Disney kept renewing options for the film, Katzenberg continued to put the film down. The animators involved with Mistress Masham’s Repose were then hired to work on an idea by Disney’s new CEO, Michael Eisner. This idea was Catch in the Rye with animals depicting the main characters. 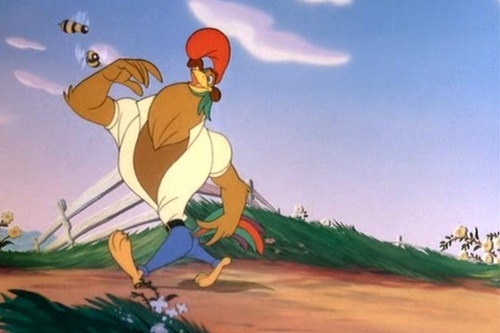 Based on the French play, Chanticleer spent twenty years in development at Disney from the 1940’s to the 1960’s. The film tells the tale of a group of “Night Creatures” who visit a farm bringing chaos and disorder to the animals who live there.

The story of Chanticleer first came to Walt Disney’s attention in 1943 upon which he instructed his workers to flesh out the material. Disney animators, however, were unsure of how to make the film’s main character, a rooster, appear sympathetic. Walt responded by combining the story with the tale of Reynard the Fox. The project was then shelved during World War II only to be revived again in the 1960’s. After visiting the Disney Animation Archive Library, Disney animators came across the early Chanticleer drawings and at the suggestion of Walt Disney continued the project. When forced to decide between Sword and the Stone or Chanticleer to save money to go towards Disney’s developing theme parks, Walt Disney chose Sword and the Stone because it was cheaper to animate humans than animals, leaving the Chanticleer among the unmade Disney animated films.

Chanticleer was officially shelved in 1991 when former Disney animator Don Bluth released Rock-a-Doodle, which covered much of the same territory. Bluth’s film was a commercial failure so maybe it is a good thing Disney did not go forward with finishing the film. 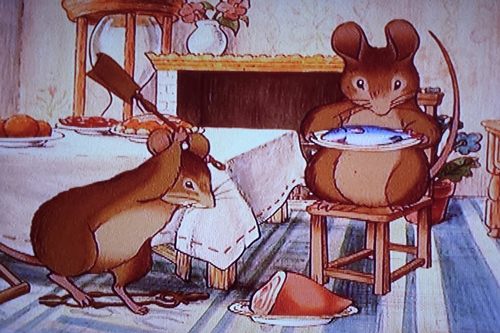 Most likely the longest developed but not released film in Disney history, Tale of a Mouse was to be a full length adaptation of Aesop’s fable The Town Mouse and the Country Mouse and a spiritual successor to Disney’s 1936 short, The Country Cousin.

Developed immediately after the death of Walt Disney, Tale of a Mouse was introduced at a time when Walt Disney Studios had lost its creative direction. At the time the studio chose to breathe life into several films discussed during Disney’s final years: The Sorcerer’s Apprentice, The Rescuers, and Pete’s Dragon. Forced to choose between two mice movies, Tale of a Mouse and The Rescuers, Disney chose The Rescuers because the story was based on the acclaimed children’s books by Margery Sharp. All that is left of the film is a series of drawing by Mel Shaw and a name that ranks among unmade Disney animated films. 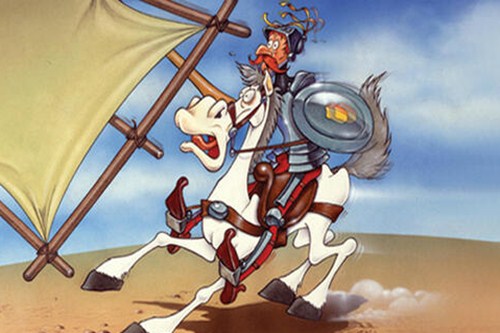 While many film directors including most noticeably Terry Gilliam have floundered in attempting to create a film of Don Quixote, the WaltDisney Company has struggled with the project since the 1940’s.

Intended as a follow up to Fantasia and Bambi, Don Quixote tells the tale of Alonso Quixano, a delusional retire country gentleman who sets out on a journey to become a knight. In the 1940’s, the Walt Disney Company did a series of watercolors of situations and characters, many inspired by Spanish artists.

Don Quixote, however, was derailed by World War II and cut backs at the Walt Disney Company following the commercial failures of Pinocchio and Fantasia. While a crew returned to work on the film in 1946 and drew enough rough storyboards for an entire film, the project was again quickly shelved for unknown reasons. Today it remains as one of the unmade Disney animated films.

As recent as 2012, though, Disney still had plans to film Don Quixote, only as a live action movie starring Johnny Depp. Disney’s most infamous incarnation of the 1605 Spanish novel, however, is the studio’s 1940’s version of the film.