The concept of time and space which are being so firmly followed in our regular humdrum lives was first challenged by the Theory of General Relativity propounded by Einstein.  Since then art forms of all kind have been on a mission to bend time and space.  Here’s a list of movies that tried to do exactly that. Check out these movies that question time: 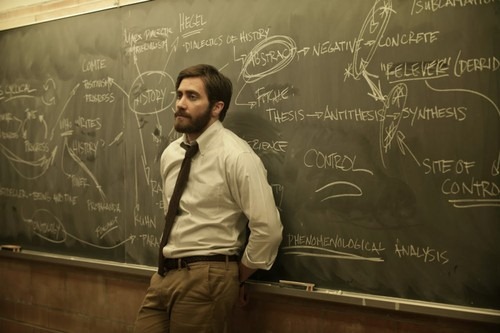 Who is more likely to be your enemy: a man totally different from you or one just like you? Enemy is a story about a man who finds his doppelganger in a movie he watches. Becoming obsessed with this lookalike, the protagonist breaches the other’s privacy. The events that follow take place in a world where nothing is ever complete. The film was adapted from Jose Saramago’s novel The Double. Temporal perplexity is depicted by editing the order of the scenes in such a manner that has modified the linearity of the story.

Similar to the animal references made in Lars Von Tier’s Antichrist, this film too uses a spider as a major animal semiotic. The orientation of dictatorship in the film is also a tip to get hold of the disorder. Enemy is directed by David Villeneuve whose previous film ‘Prisoners’ was also highly praised. Even if one can decipher the chaos within the film a dilemma still persists. 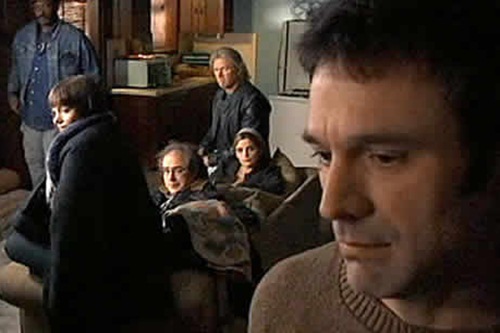 This film is based on a short story written by Jerome Bixby and deals mostly with philosophical issues of morality, empiricism, religious beliefs, existentialism and other cerebral notions, The Man from Earth is one of the movies that question time. The film fictionalizes the life of a man who claims to have walked the earth for 14,000 years. The man is a professor, on the verge of leaving his present home after quitting his job. He is visited by colleagues who listen to his story and spend the rest of the evening conceiving and evaluating him. The extraordinary philosophical treatment given to the film would make anyone question their beliefs.

The movie was totally shot in a room and can be considered to be a science fiction film without the use of any form of visual effects. The engrossing elements are the intense conversations made throughout the film that hold high intellectualism. The story is Bixby’s best work and was completed in his deathbed. 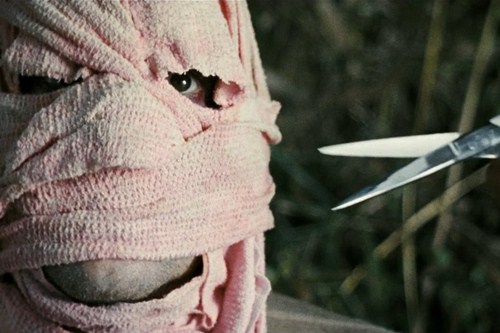 Start by secretly watching a girl undressing herself in the woods, then escaping from a masked man who’s trying to kill you and while doing that, accidentally enter a time machine to hide yourself. All hell breaks loose. This happened to a man named Hector. Timecrimes is one of those movies that question time, a Spanish movie which is considered to be one of the time-bending masterpieces.

The time-bending idea in the film is manufactured by a time loop plot device, in which certain periods of time recur and are re-experienced by the characters repeatedly. Generally in fiction, time loops are portrayed in an optimistic fashion where the character most definitely escapes the horrific loop, but the time loop concept forbids 8 out of 10 escapes and locks them into a persisting trap of repetition and the story remains inconclusive. 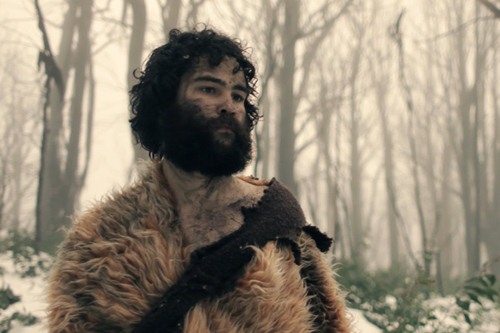 41 is an absolutely independent film and among those movies that question time. It focuses on a guy who finds a hole in a motel bathroom floor that guides to yesterday. The bathroom is in a room that is numbered 41 and so the name of the film. The guy uses the hole to go to the past and change certain things, like the death of his grandfather and his ex-girlfriend.

The storyline shows a striking violation of the famous grandfather paradox where one travels to the past to prevent one’s grandparents from meeting thus preventing the birth of the time traveler which is considered impossible because if it was true then there wouldn’t be the need for the time travel. The idea that the film delivers is that when one travels time, the person actually brings space near to him rather than time itself. Thus one can influence the past to change the future but not intervene. 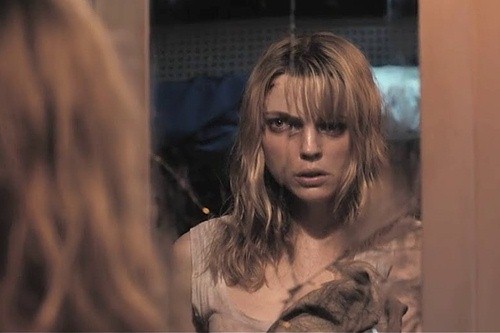 This film reminds one of the term “pulling yourself by your bootstraps”, a term that was popularized by Robert Heinlein in one of his stories. Triangle is an account of a woman called Jess, a single mother, who goes on a yacht trip with her friends. During the trip they have to abandon their vessel due to a storm and take shelter in a deserted ocean liner where they become certain that they are being stalked by an unseen stranger. Sounds simple? Not if one watches it. In the liner Jess realizes that she has been there before. Déjà vu shit just gets real.

The film uses the reference of causality loop also known as the bootstrap/predestination paradox of time travel and so the above mentioned term. This loop means that cause and effect are independent of one another and can change their roles anytime. Triangle came at number 6 in the list of movies that question time. 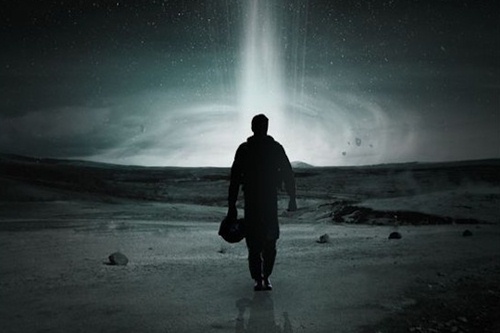 Kip Thorne, the acclaimed astrophysicist who theoretically conceptualized the worm-hole enigma and time travel, is the not just the major inspiration for Interstellar but he also served as one of the executive producers of the film. Interstellar is the latest talk of the town placed into light by the never so simple Christopher Nolan. The film provides a very sensible reason for earth’s future apocalypse that is constituted by a global crop blight and dusty air. To ensure humanity’s survival and to look for a habitable planet to start a new life, a team of explorers travel through a worm-hole in space.

The film uses theories of interstellar voyage and twin paradox to radiate the complexities of actual sci-fi. With an incredible use of visual effects, Interstellar puts forward the most theoretical suggestion of time travel by stating not just the result but also the process leading to it. 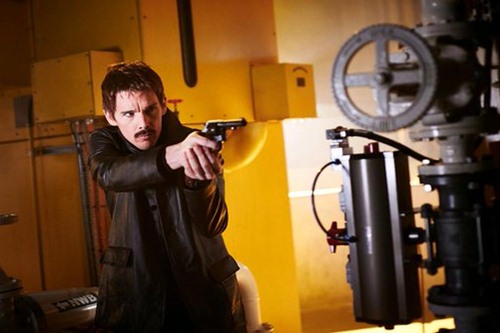 Heard of the snake eating its own tail? The Ouroboros is a Greek symbol that gives the essence of a past which is engulfed by reality thus vanishing but still existing. Ranked among movies that question time, this film describes the myth of the ‘Ouroboros’ by a telling the story of a temporal agent sent on a final mission to kill a bomber who took the lives of thousands without feeling anything. All this agent has to do is to make backward jumps in time and get hold of this eluding terrorist.

Based on the 1959 short story called All You Zombies written by Robert Heinlein, Predestination is quite like Oedipus Rex with elements of time travel incorporated. The concept of predestination paradox is a major weapon of the film altering the notion of cause and effect relationship. Led by Ethan Hawke in one of his best roles, Predestination is a tale of a being, resurrecting through time and space.

Comprised entirely of black and white photographs, Chris Marker’s La Jetée is a film that describes time in a way that has never been perceived. The film is a tale of a man who narrates his condition from a prison after the end of the Third World War and a nuclear disaster. This man is sent back and forth in time in search for the answer to save mankind from the depleting conditions of earth like scarcity of food, medicines and energies. The man’s story revolves around a lone woman, a child, and questions of life and death.

This photo novel’s totality gives the impression of the illusion of space time in every aspect that includes photography, soundtracks, editing, dissolves, and also a live action sequence within the 28 minute long film. Due to the lack of resources, Chris Marker could hire a video camera for a day only and that resulted to the single live action scene in the film. 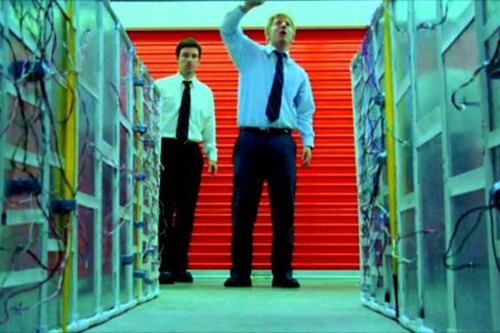 Shane Carruth, the auteur who made the inconceivable film Primer, is a mathematician by training and has worked as a software engineer. Regarded as one of those movies that question time, Carruth says that the average audience will only comprehend 70 percent of Primer in the first viewing.

Primer is a story about four friends who are small-time entrepreneurs dealing with error-checking technology. Two of them in their leisure get involved in quirky experiments and one of these experiments leads to the accidental building of a machine that has the capacity to travel time. After enhancing the machine to hold a human inside, the two friends embark on a journey in and out of time to become successful; but their realities hold something else as consequences of their acts.

The film was made with $7000 and till date it can be considered as one of the most realistic sci-fi films ever made. Mike D’Angelo from the Esquire says that if someone claims to have understood the film at once is either a savant or a liar. 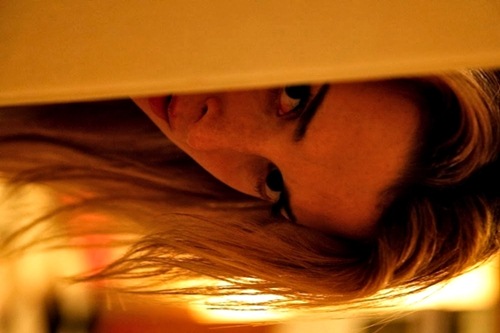 Based on the thought experiment by Schrodinger’s Cat and Many-world’s Interpretation, Coherence is James Ward Byrkit’s debut film. The film shows eight friends, joined for dinner, who start facing anomalies when a comet passes by. The effects include repetition of events and characters, resulting in an uncertainty. As explained in the Uncertainty Principle given by Werner Heisenberg that not everything is guided by cause and effect, Coherence follows somewhat a similar line up of events surely making one ask about space-time more than once. The whole film is quintessentially a bank of quantum mechanics and also draws reference from the theory of decoherence.  Coherence encompasses around the passing of the Miller’s comet which in reality have caused strange occurrences on earth earlier.

The film despite being made on extremely low budget, it’s one of those movies that question time. It takes place entirely inside a house that belongs to the director in real life. The movie stars Emily Baldoni as its lead.