There are over 7 billion people living on the planet. This means that the chances that you’ll bump into your favorite celebrity are extremely slim. So, instead of waiting things to happen, it’s better to start visiting places where your favorite celebs hang around. To help you along, we have decided to create a list with 10 Best Hotels to Spot Your Favorite Celebrities!

Located in the very heart of New York City, the Trump International Hotel a 52-storey high skyscraper, situated between the Broadway and the Central Park. Although the construction of the building started in the late 60s, it was in the mid-90s when Donald Trump got involved. The current President-elect wanted to make the skyscraper a residential building, but due to the zoning laws, only about 200 units could be sold as condominiums. The rest became a part of the Trump Hotel.

Staying at the Trump International Hotel & Tower New York is not cheap, but you get an impressive amount of comfort instead. In fact, every room in the hotel features a free Wi-Fi, iPod docks and 55-inch flat-screen TVs. The only bad news is that you probably won’t spot too many A-list Hollywood celebrities since Trump got into a feud with most of them. Those include Beyonce and Jay-Z, both of whom actively supported Trump’s archenemy, Hillary Clinton, during the 2016 Presidential Election.

Speaking of the famous couple, they are known to like spending winter holidays at one of Colorado’s 5-star resorts. The Little Nell in Aspen is among the best hotels on the planet when it comes to the service, which is why it’s not a surprise that celebrities like staying there. Apart from Jay-Z and Beyonce, the hotel also welcomed Canadian superstar, Justin Bieber on a couple occasions.

According to the Daily Mail, a number of celebrities spent the 2017 New Year’ Eve at the Little Nell, including a supermodel Bela Hadid and the actress Kate Hudson. This winter, Kourtney Kardashian was also spotted in Aspen, accompanied by her partner, Scott Disick. 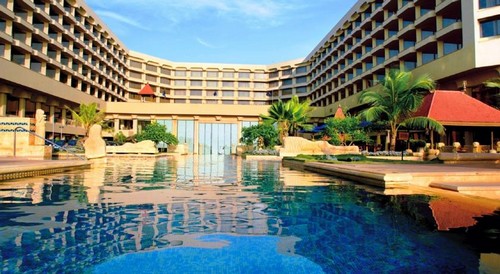 If winter is not your favorite time of the year, maybe you should go for a celebrity-hunt in some warmer parts of the planet. Mumbai is the center of the Indian film industry, the so-called, Bollywood. Speaking of it, one of the biggest Bollywood stars is Salman Khan, an actor who is often spotted at the JW Marriott Mumbai Juhu hotel.

JW Marriott has its own private beach, but what brings a number of celebs to the 5-star hotel is the level of excellence it has to offer. In fact, this is one of the most luxurious hotels on the planet. The best thing about it is that it’s actually pretty affordable, especially when compared to other 5-star hotel. You can find a room for two at JW Marriott Mumbai Juhu for less than $200 a night!

The fans of soccer have a chance to stay at the same hotel as one of the legendary managers, Jose Mourinho. Since he became the manager of Manchester United, Mourinho has been staying at the Lowry Hotel. The 5-star hotel is situated in the part of Manchester called Chapel Wharf, less than 3 miles away from the Old Trafford.

It seems that the Lowry Hotel is a favorite place of soccer players as the whole squad of Barcelona, including Leo Messi, stayed here when they played against Manchester City in the Champions League. Another thing that is interesting about this luxury hotel is that it’s fairly affordable. In fact, the Lowry Hotel is one of the cheapest 5-star hotels in the UK! 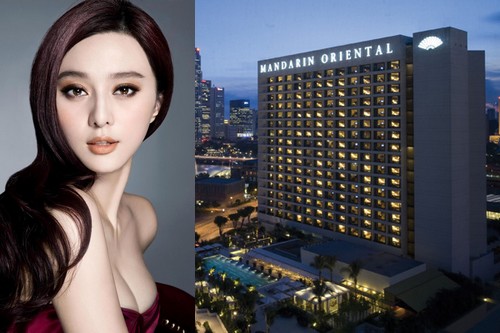 Overlooking the Victoria Harbour, this upscale hotel is the place to be if you want to meet celebrities. In fact, there probably is not an A-list Asian celebrity that hasn’t, at least, visited one of four gourmet restaurants in the 5-star Mandarin Oriental Hong Kong hotel.

One of the regular visitors is Fan Bingbing, a famous Chinese actress who played in a number of blockbusters, including Cell Phone and X-Men: Days of Future Past. Apart from Fan Bingbing, other celebrity fans of Mandarin Oriental include Lucy Liu, Dame Helen Mirren, Vanessa Mae, etc.

Hotel Hassler is one of many luxury hotels in the Eternal City. What makes Hassler a favorite among celebrities is its location, in the very heart of Rome. The hotel is located next to the Spanish Steps, one of the biggest attractions of Italy’s capital. A number of important historical sites are also nearby, including the Trevi Fountain and the Colosseum.

The Hassler Hotel is often visited by celebrities from all around the world, but the Beckhams seem to like it the most. Victoria and David were spotted staying her on a couple of occasions. Apart from the celebrity couple, Gwyneth Paltrow, Tom Cruise, and Jennifer Lopez also stayed at the Hassler in the past. 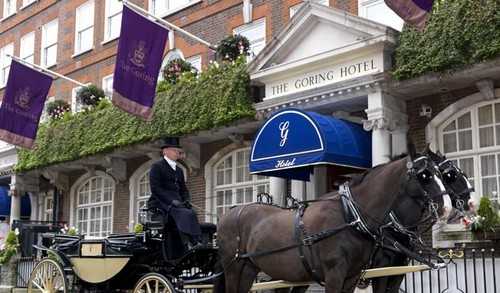 The Goring is one of the most prestigious hotels in the United Kingdom. It was awarded with 5 stars by the Forbes Travel Guide for the level of luxury it provides to the guests. However, it’s not all about extravagance when it comes to the Goring hotel. Its fame has a lot to do with hotel’s history.

Built in 1910 in one of the most vibrant parts of London, the boutique hotel quickly became a favorite of the British aristocracy. The Goring was one of the favorite places of the Queen Mother. In fact, this hotel was the place where she made her last public appearance before her death in 2002. Among other historical figures who had stayed at the Goring are the US President Woodrow Wilson and Lady Randolph Churchill, the mother of Winston Churchill.

These days, the Goring is once again the right place for spotting the royals. In 2011, Kate Middleton and her family stayed here prior to the Royal Wedding. If you want to do the same, you will need to pay about $515 a night.

Plaza Athénée is one of the most iconic hotels in Paris. The thing that makes it stand out from other Parisian hotels is its location. You can see the Eiffel Tower from most of the rooms at the Hotel Plaza Athénée. Other historical landmarks close to the hotel include the burial site of Napoleon Bonaparte, Les Invalides. City of Paris’ Museum of Modern Art is also a couple of blocks away from the hotel, same as the Gardens of the Trocadero.

Apart from the location, Hotel Plaza Athénée is also famous for the level of service it provides to the guests. In fact, that is the reason why the Forbes Travel Guide awarded the hotel with 5 stars. Johnny Depp was one of the celebrities who was a regular at Plaza Athénée in the past, while in the recent couple of years, most notable celebrity sightings include Britney Spears, Natalie Portman, Mila Kunis, etc. 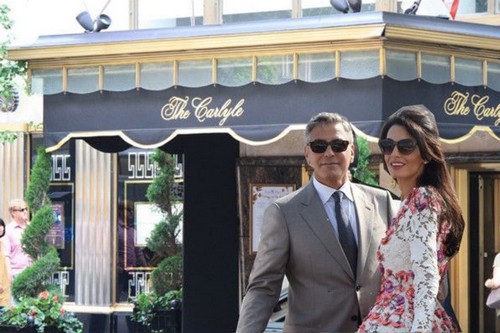 The Carlyle has always been the favorite New York City hotel for a number of celebrities. It all started back in the 1960s, when President John F. Kennedy owned an apartment in the hotel building. It seems that since there aren’t many celebrities who haven’t stayed at this hotel or at least attended one of the famous jazz performances, including the Woody Allen & the Eddy Davis New Orleans Jazz Band, which plays every week at the Carlyle Hotel.

For some reason, the hotel has a cult status in the British culture, with a number of famous people from the UK staying here when visiting the United States. The Rolling Stones are among those people, but the British Royal family was also spotted here, same as the Beckhams.

It seems that Hotel Beverly Hills is the best place in the world to meeting celebrities. It has been that since the early days of Hollywood. Located on the famous Sunset Boulevard, the 5-star hotel was the favorite stay for some of the biggest movie stars in history, including Charlie Chaplin, Rudolph Valentino, and Marlene Dietrich.

Even today, the hotel is often packed with celebrities, although the 2014 boycott definitely hurt the hotel’s reputation. A number of A-list celebs decided to stop coming to the hotel as a way of protesting the anti-LGBT stances of the hotel’s owner, the Sultan of Brunei. Prior to the boycott, Robert De Niro was seen having a breakfast at the Beverly Hills Hotel almost on a daily basis.