The flamboyant frontman for Aerosmith, one of America’s most successful rock bands (having sold more than 66.5 million units), Steven Tyler, the self-proclaimed “Daemon of Screamin’,” is best known for his impressive vocal chops, bluesy harmonica skills, and being one half of the “Toxic Twins” alongside bandmate Joe Perry. Stepping away from Aerosmith here and there, he’s recorded with many other artists throughout the decades, producing some popular as well as some more obscure collaboration. Here are ten worth visiting. 10 Steven Tyler Collaborations You Must Know – 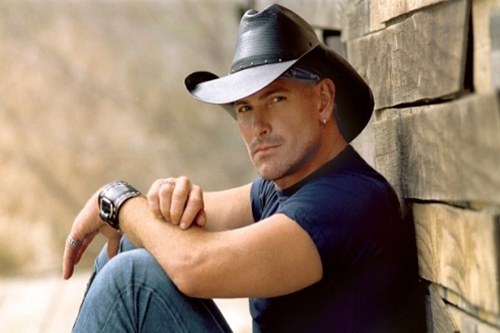 Featured on Anderson’s 2005 debut album of the same name, Tyler appears on a remix version of this song. It was intended for release as a single but never came to light. Steven can be heard mostly singing along with Keith, howling here and there, and shining mostly toward the song’s end when he whips out the trusty harmonica for a few bars. You can check out the video here. Most importantly, this reminded folks of Steven’s deep love and appreciation of country music. Spending much of his childhood at Lake Sunapee in New Hampshire, Tyler became and continues to be an avid outdoorsman. Tyler has been seen in recent years tapping into his country roots, performing with superstar Carrie Underwood at the ACM Awards and on CMT’s Crossroads (she also sang on “Can’t Stop Lovin’ You” from Aerosmith’s 2012 Music From Another Dimension), as well as making a cameo appearance with Underwood and Brad Paisley at the 2014 CMA Awards. In addition, Tyler has recently moved to Nashville and is set to sign with Big Machine Label Group to begin work on a country album. Will it flop, or will Tyler once again unexpectedly achieve success by crossing genres? 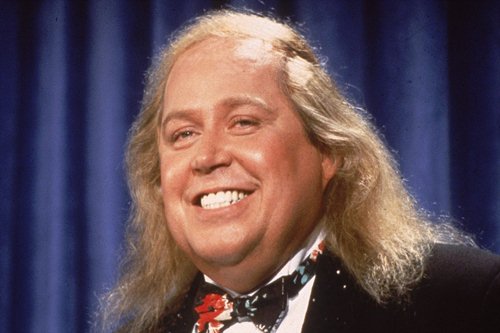 Originally recorded by The Wild Ones in 1965 (the most popular version being recorded by The Troggs), stand-up comedian and actor Sam Kinison recorded his own take in 1988 for his album Have You Seen Me Lately? The over-the-top “singer” gathered friends who matched his personality, including fellow comedian Rodney Dangerfield, the likes of rockers such as Tyler, Jon Bon Jovi, Billy Idol, Slash, Steve Vai, Tommy Lee, as well as 80’s model, actress, and then girlfriend Jessica Hahn (remember televangelist Jim Bakker?) for the famous floor mat scene.  A raucous video, which can be seen here, the song was an MTV hit during the video era. Tyler, fresh from rehab and enjoying successful career resurgence with Aerosmith, can be heard and seen with Perry being the true “Bad Boys from Boston” and proving to their younger counterparts they were still relevant to mainstream music and video. “Wild Things” ranked ninth in the list of 10 Steven Tyler collaborations you must know of. 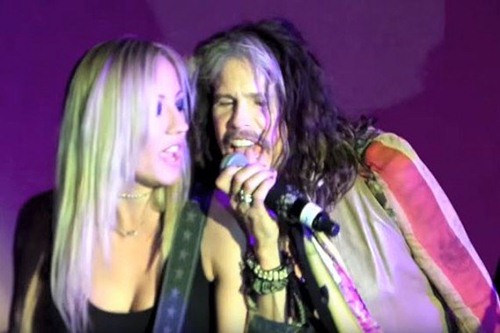 From his 1989 Trash album, Cooper’s “Only My Heart Talkin’” is a power ballad written primarily by the “Godfather of Shock Rock” himself. Tyler and Cooper being longtime friends helped form the guest appearance, but it didn’t hurt Desmond Child was the single’s producer. Child was slowing entering his way into the Aerosmith catalog—a move many devoted Aerosmith fans from the previous decade saw as trading the band’s dirty, bluesy sound for a more pop-rock approach for mainstream audience appeal. Though Steven never appears in the video personally, the woman who leaves Alice is seen exiting in a white car with a “Steven” license plate. It seems, once again, Steven gets the girl and solidifies his “rock god” status. The song closes with a howling match—possible victory cries for Tyler and angst-ridden damnation by Cooper. Of course, Cooper was known for having snakes on stage during his performances . . . maybe he left one in the car as a gift for Tyler. You can view the video of “Only My Heart Talkin'” here. This song is a must in any list of great Steven Tyler collaborations. 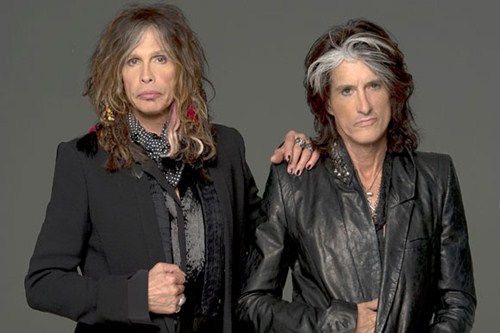 Recorded for the 1999 Bob Marley remix album Chant Down Babylon, this infectious reggae tune gets a rock-inspired facelift with Perry’s guitar work while still honoring Marley’s legacy. “Roots, Rock, Reggae” is one of the greatest Steven Tyler Collaborations ever. Though not released as a single, this song was the only cover to include rock musicians, let alone anyone of Tyler and Perry’s stature. Covered 18 years after Marley’s death due to cancer, the song hears Tyler swapping lines with Marley, creating a truly rock and reggae ode to one of music’s greatest pioneers. Marley, a famous follower of Rastafarianism, was known for mixing spiritualism with his lyrics and music. In this song, Marley writes “Feel like dancing, dance ‘cause we are free”. A perfect tribute, Tyler and Perry, like other artists on the rest of the album, are able to remind listeners that now Marley is able to rejoice in Babylon. You can view the one-of-a-kind remix here. 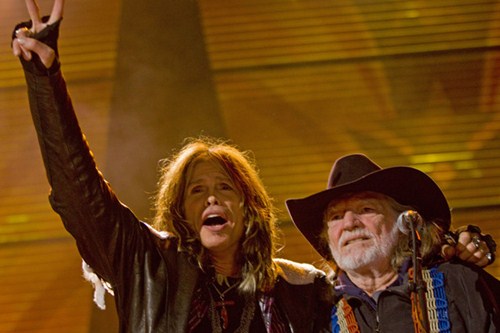 Written by Tyler and Richard Supa, the song was originally meant for Aerosmith’s 1987 comeback album Permanent Vacation. It didn’t make the cut, but it did find its way into existence as a b-side. Years later, it was re-recorded with country outlaw legend Willie Nelson. Nelson himself is known for spanning all genres, having recorded nearly 70 studio albums containing country, blues, pop, reggae, standards, etc. Already having a strong country flavor, “Once is Enough” became even more of a cross-over recording when the Red Headed Stranger joined forces and added his recognizable twang to the song. Again, like with Marley’s “Roots, Rock, Reggae,” and with others which appear later on this list, we see Tyler’s ability to transcend musical boundaries and consistently mix and mingle with various genres. Performing another of his famed “Willie Nelson & Friends” concerts, the Texas-Maui duo can be seen in action here at the Beacon Theatre in 2003. Thus far, the two have yet to pair up again, meaning that maybe once is enough. “Once is Enough” came at number six in the list of 10 greatest Steven Tyler collaborations. 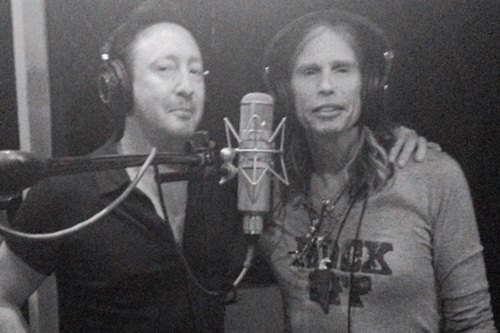 Written by the two along with Mark Spiro, this song appeared as a bonus track on the international release of Lennon’s 2011 album Everything Changes. Julian (Paul McCartney wrote “Hey Jude” for him), the only child of Beatle John Lennon and his first wife Cynthia Powell, can’t help but remind listeners of his father’s legacy with this song. Wishing to collaborate with Tyler, Julian contacted the rocker and the two paired up to create this hidden gem which promotes world peace, harmony, unity, and love by kickstarting the tune with Eastern melodic sounds. Lennon, a notable philanthropist in his own right, created the White Feather Foundation (promoting “environmental and humanitarian issues”) and plays an active role in the Whaledreamers Organization (focusing on aboriginal tribes, whales, dolphins, and humanity). Tyler, like most other musicians to precede The Beatles, was influenced by The Fab Four growing up and their ever-present message of love. Fittingly, he was able to work with Julian on a song containing themes consistent with Liverpool’s finest songbook. “Someday” is definitely one of the best Steven Tyler collaborations out there. 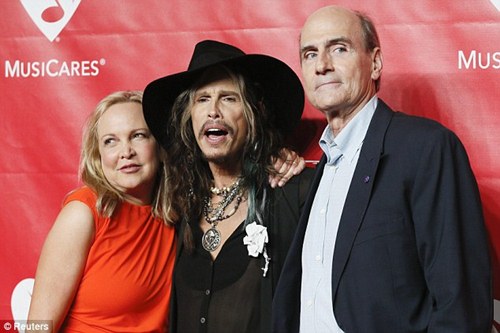 Recorded for Carole King’s 2001 album Love Makes the World, Tyler provides backing vocals for the legendary singer-songwriter throughout this fun, rollicking tune. “Monday Without You” is one of the top 10 Steven Tyler collaborations ever. Aerosmith was riding a high at this time with hit single “Jaded” from their successful album Just Push Play.Keeping in touch with artists their own age, it made sense for King and Tyler to join forces and show everyone the elderly statesman and woman still had the necessary chops to provide listeners with an enjoyable song. They were appealing to younger audiences, due, in part, to the Rock n’ Roller Coaster opening only a few years previously at the Walt Disney World Resort in Florida.The high-speed coaster features Tyler and company rushing to a show to avoid being late, all the while blasting Aero tunes along the way. In 1997, another all-star collaboration occurred for this song: The Wilsons (sisters Carnie and Wendy) alongside father, Brian Wilson, legendary frontman for the Beach Boys. 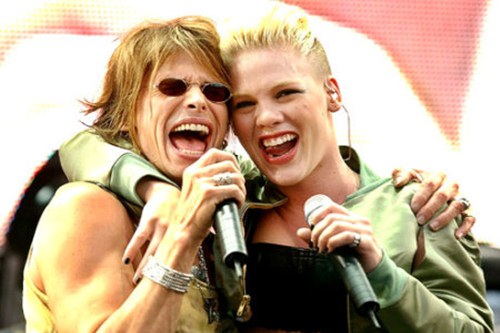 2001 was a busy year for Tyler and company. A new album, videos, and a tour to boot would be enough to keep anyone busy; however, Steven continued his streak of duets and appearances with this gem which only further placed both Aerosmith and Tyler in the spotlight at the turn of the new millennium. Written by longtime Aerosmith collaborators Marti Fredricksen and Richie Supa, “Misery” appears on P!nk’s 2001 sophomore effort Missundaztood. The album warranted P!nk her first taste of major commercial success and “Misery” allowed her to display her gravely, bluesy vocals by trading licks with one of the best. Like most blues songs, the lyrics include a heartbroken, lonely nobody who pines away at the moon over a lost love. Yet, the pair breathe new life into the classic approach. The two performed the song together at various VH1 Awards Shows, always to rave ovations. Of course, the original recording gains a nice boost, starring Bon Jovi guitarist and fellow rocker, Richie Sambora. “Misery” ranked third in the list of top 10 Steven Tyler collaborations that you must know. 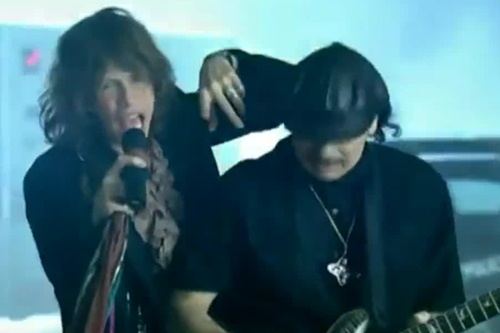 What does Carlos Santana, the most famous Latin-American rock guitarist, who is worshiped as a Mexican god, do for fun? Well, pretty much anything he wants. So, that’s exactly what he did for his 19th studio album, All That I Am, released in 2005. Experiencing a career resurgence, thanks mostly in part to 1999’s Supernatural (which snagged him 8 Grammys), 2005 saw Santana collaborating with many younger artists such as Michelle Branch, will.i.am., and Mary J. Blige. Yet, none on the list contained the generation-spanning star power of Tyler. The legendary partnership was also a commercial success, warranting a top ten hit in Australia and gaining an APRA (Australasian Performing Right Association) 2007 award for “Most Performed Foreign Work”. Some 35 years into his career, Tyler was proving he was still a presence to be reckoned with on the charts, better yet, even on a global scale. Listen to “Just Feel Better” here, that came at number two among the best Steven Tyler collaborations. 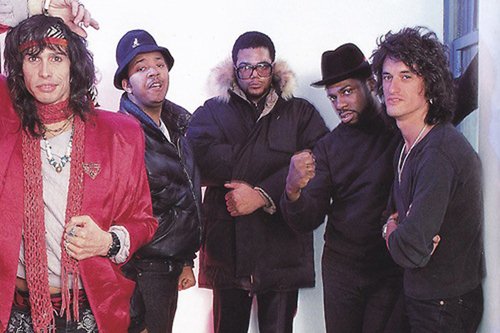 Among the best Steven Tyler collaborations is the song “Walk This Way” Aerosmith successfully solidified their place in rock history in one decade. Throughout the 1970s, fans saw classics produced such as “Dream On”, “Sweet Emotion”, “Toys in the Attic”, “Back in the Saddle”, and the original “Walk This Way”, only to name a few. Albums such as Rocks and Toys in the Attic found their way into any classic rocker’s collection. Yet, by the mid-80s, drugs and alcohol had destroyed the band. Joe Perry and fellow guitarist Brad Whitford had left to begin their own projects. Steven remained, along with bassist Tom Hamilton and drummer Joey Kramer, and the others were replaced, but it just didn’t click. Finally, after rehab and conversations, the original members reconvened to produce 1985’s Done with Mirrors. While a hit to some diehard fans, the album was a commercial letdown, further dampening the bad boys’ chances at a major comeback. But then, Run-DMC, a rap group, came along, with desires to remake the 70’s smash “Walk This Way”. Tyler and Perry joined in the effort and the end result was a major success. Raising Hell, completed in 1986, hit number one on Billboard’s Top R&B Albums chart, and number six on the Billboard 200. The “Walk This Way” remake hit number four on the Hot 100, and has since become the landmark rock/rap collaboration. Interestingly enough, before Tyler and Perry were called in, Run-DMC members had no clue who Aerosmith even were. The mash up placed the Boston rockers back on mainstream television and led to a string of highly commercially successful albums for the next fifteen years. The ultimate example of Tyler’s musicianship, Run-DMC’s version of “Walk This Way” exhibits how “The Daemon of Screamin’” has always found a way to cleverly place himself in the right place at the right time. Check out the video here.

10 Steven Tyler Collaborations You Must Know