It’s a widely known fact that comics aren’t taken seriously. Moet people imagine comic are cheap entertainment meant for kids. What most people fail to understand is that comics are also a form of storytelling. The stories are told by drawing instead of just words. Her I am going to discuss 10 comics that could pass for literature. 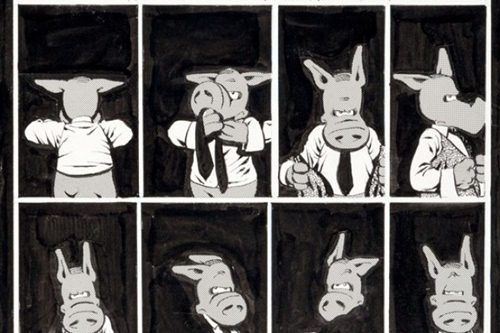 Cerebus is a very interesting comic, one of such comics that could pass for literature. You’d know if you read it. It ran for 300 issues (1977-2004), and was written and (mostly) illustrated by Dave Sim. Often considered one of the most significant comics in the history of self-published comics, it is about a barbarian aardvark named Cerebus. In the first twenty-five issues it was mainly a Conan parody. As it grew it expanded into any topic that Sim wanted to explore. Sim drew controversy from many people over some of the personal philosophies he espoused in Cerebus. So why is it literature?

It used the comic medium to its fullest extent. The art is absolutely beautiful and not just something on the side. Cerebus plays with narrative structure and talks about some heady themes. As well as creating a fascinating character. I will say this though. I don’t think all of it is particularly literary. I think that the “High Society” arc was the most literary. The rest are very good though.

9. The Unwritten by Mike Carey 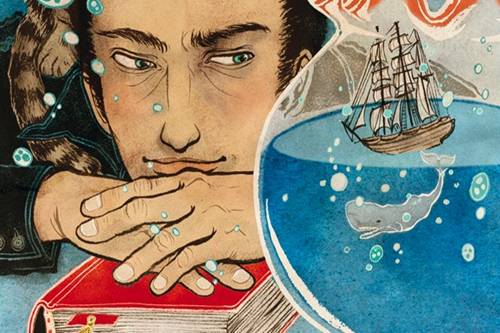 The Unwritten is a comic about a man named Tom Taylor who is the son of a very famous author named Wilson Taylor. Wilson Taylor wrote a series of books about a young wizard with the same name as his son. Wilson Taylor has been missing for many years. Tom Taylor lives off of his father’s fame for a while until a series of strange things start happening. At first a pretty typical thriller plot but it quickly talks about some very heady themes.

The Unwritten is a great series filled with numerous literary references and themes. Ideas about fiction and stories themselves are present. The comic tackles themes such as fame, childhood, and the relation between fiction and reality. It helps to be familiar with some of the great literary works and the ideas behind those works. About half-way through the series it crossed over with the popular comic book series Fables which in itself has some literary merit. However I didn’t find these moments to be very good. ‘The Unwritten’ came at number nine in comics that could pass for literature. 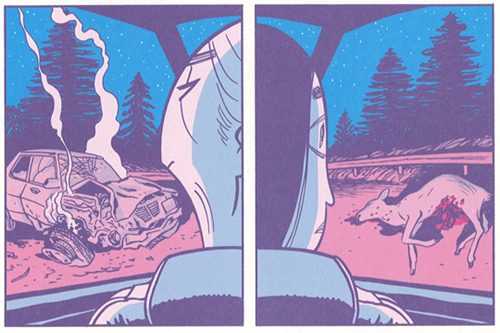 Asterios Polyp is an existential tale about an architect and professor named Asterios and is certainly one those comics that could pass for literature. One thing I’ve noticed about comics is that they often tend to have characters that are larger than life. Instead of a “larger than life” protagonist we have a character that most people can relate to in one way or another. A “lost soul” struggling with a broken marriage and the inability to relate to others, David Mazzuchelli uses the art to not just enhance the story, but tell the story. The art is used to showcase the personality types of the various characters. It makes the characters look a lot stranger, visually, but it is an effective technique that communicates a lot without having to use exposition.

Literary references abound. Greek myths, architectural styles and ideas such as fate and destiny are all explored in this work. These references and themes aren’t just for show. They are part of what makes this story work.

Essex County is a series of short stories about the lives of the people living in the small town of Essex County. The stories detail not just the lives of these people but also their hopes and dreams. We as humans, tend to have various hopes and dreams in our life. Some of these dream we accomplish some of them we don’t. It’s a part of life. Themes like this are universal and make the comic very relatable and allow us to feel empathy for the people that haven’t accomplished, or reached their dreams. 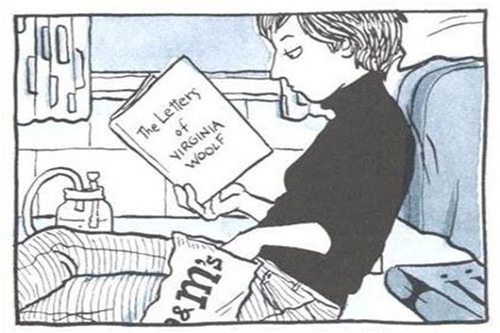 Fun Home is a memoir of Alison Bechdel’s early life. Focusing on her relationship with her father and themes such as sexuality, suicide, and the role of literature in one’s life, Bechdel talks seem heartfelt and deeply honest. Alison Bechdel writes the narrative with precision and often toys with narrative structure. Allusions to literary works form the backbone of this particular narrative.

The art is used to tell the story and describe the emotions and themes of each chapter. Instead of being used as minor illustrations with no deeper meaning it serves as a key part of the entire story. All comics should strive for this. Instead of “telling” they should “show”. The narrative structure and the art allow Bechdel to show her emotional state at the time as well as tell a story that is deeply personal. In many ways Fun Home is groundbreaking for being both a comic and a memoir. 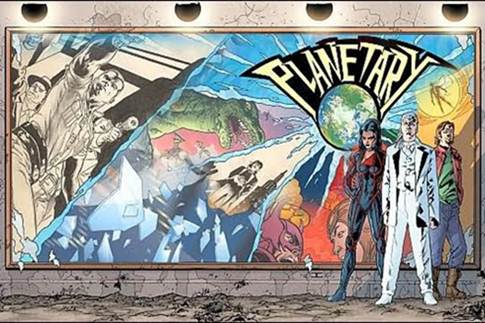 Planetary is about an extremely secret organization dedicated to investigating some of the more strange and bizarre things in the universe. The characters interact with various creatures and beings and travel to bizarre landscapes straight out of a book, all while slowly uncovering the mystery of the organization and its founder. The closest to Planetary is Lost. Each of these series uses their serial narrative to focus on the characters and build a world at the same time.

Beyond the simple premise Planetary is about the origins of pulp fiction and what it would be like if some of these popular characters and stories were created today. No longer would characters like Sherlock Holmes or Godzilla have the same effect. Planetary is a self-aware commentary on the times and how much we, as a culture, have changed. Planetary delivers great commentary and a conceptually rich story all while being extremely entertaining. ‘Planetary’ came at number five in our list of 10 comics that could pass for literature.

4. The Arrival by Shaun Tan 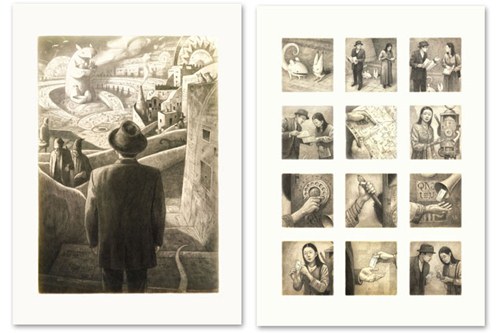 The Arrival is a comic without words. I, personally, prefer that type of style. In some comics you cannot tell the story without words. Our story centers on a man leaving his home and traveling to a land very different from what he is used to. Shaun Tan is not exactly subtle about communicating what this book is truly about. This is not a bad thing though, far from it. Knowing that it is about the immigrants experience allows us to let the art wash over us.

Words are not used because the protagonist cannot speak nor understand what everybody else is saying. We never really learn about this land and what those strange creatures are because the protagonist does not. The story, combined with the fantastic illustrations, manage to immerse the reader in the experience of this immigrant. The Arrival is a fine work of art that can be enjoyed by anybody.

3. The Book of Genesis by Robert Crumb 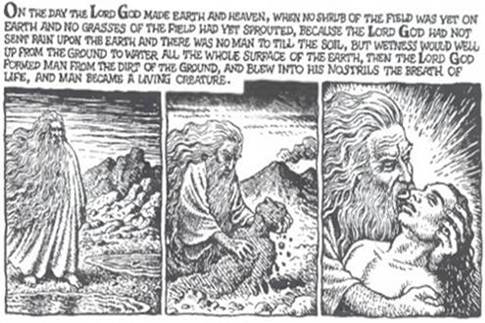 The Book of Genesis an adaptation of, well, the Book Of Genesis and is one of those comics that could pass for literature. Robert Crumb uses a vast arsenal of tones and styles in this comic. Most book-to-comic adaptations often exclude bits of prose and the like. Not so with the Book Of Genesis. Crumb includes every word from the original book. At first this may seem boring, but Crumb makes this a very enthralling experience that I found myself glued to.

While it is an adaptation, I would say in some ways it subverts the material. It does this by making us reconsider the source and its value. Like all literature, this is up for interpretation. Some may debate its religious value. After all, Crumb is an atheist. However I think that is looking at it the wrong way. Crumb does a fantastic job of illustrating the Book of Genesis and I think he wants to let the art speak for itself.

2. The Life and Times of Scrooge McDuck by Don Rosa 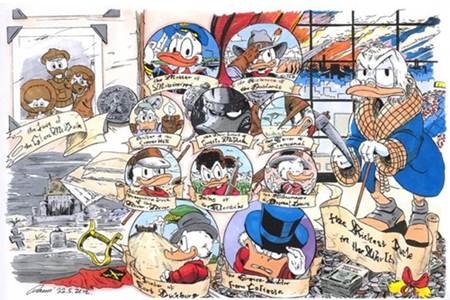 Scrooge McDuck? Literary? Yes, this comic is to pulp fiction what Lord of the Rings is to fantasy. Don Rosa writes about the life of Scrooge McDuck, who we all know is a famous Disney character as well as Donald Ducks uncle. Don Rosa was inspired by Carl Barks. Barks used to write about Scrooge and Donald. His stories were often quite pulpy but extremely fun and engaging.

Don Rosa does an excellent job at blending classic pulp fiction elements and the cartoon characters we all know and love. He takes inspiration from writers such as Rudyard Kipling, H. Rider Haggard and of course Carl Barks himself. What follows is the epic tale of how Scrooge McDuck amassed his fortune. During the journey we see a variety of interesting locations. Scrooge travels through locales such as vast deserts and snowy mountains. It takes place between the years 1877 to 1947. ‘The Life and Times of Scrooge McDuck’ came at number 2 in our list of comics that could pass for literature.

1. WE3 by Grant Morrison 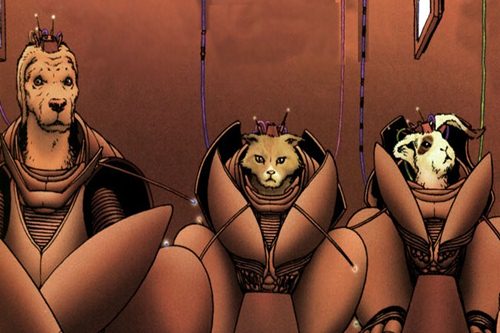 I love Grant Morrison. He’s my favourite comic writer and I love most of the stuff he has done. I was tempted to put my favourite comic of all-time on this list, The Invisibles. Instead I  chose WE3 because I consider it to be much more focused and overall a much tighter package. WE3 is the story of three animals that have been converted into weapons. They escape from the facility holding them and are chased down by the military. A lot like Homeward Bound, only much more violent.

At its core, WE3 is a story about how humans are often very inhumane. How we humans tend to inflict suffering on animals and other human beings. Within us is a tremendous amount of good that we shouldn’t deny or try to hide behind a mechanical facade. I found WE3 to be a very sad story but also very heartwarming and uplifting.

10 Comics That Could Pass for Literature